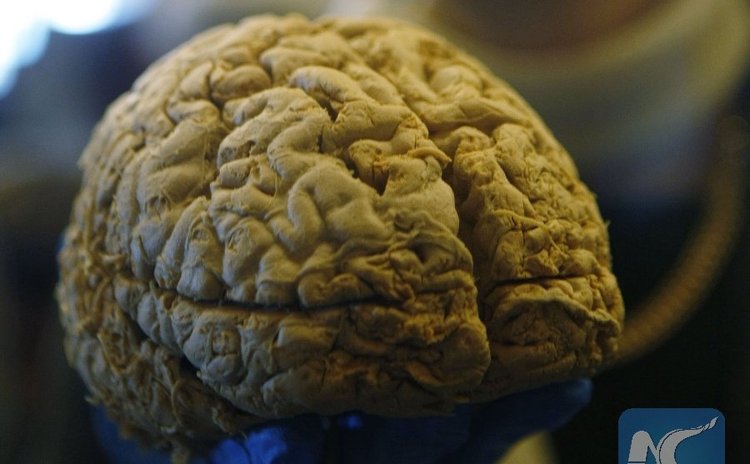 A resident takes a look at a human brain specimen at the Brain Health Fair held at Vancouver Convention Centre in Vancouver, Canada, April, 15, 2016.

The researchers, led by Karl Deisseroth, a professor of bioengineering and of psychiatry and behavioral sciences, reported their findings in a paper published online in Cell.

How it governs these opposing processes of reward or aversion, however, has been largely unknown.

In the new study, the researchers combine, for the first time, two cutting-edge research techniques, known as optogenetics and CLARITY, developed by Deisseroth.

The first facet of the research involved CLARITY, a remarkable feat of chemical engineering in which the fatty, opaque tissues that constitute an intact, non-living brain are removed, leaving behind a transparent physical structure with all of its parts and wiring exactly in place.

It allowed the researchers to trace specific pathways and "label" specific molecular structures within the brains of the subjects, which in this case were mice. They gave the mice positive or negative stimuli.

Only the neurons that had been strongly active during the experience became labeled -- along with their outgoing connections -- allowing effective tracing of the distinct circuits through the brain.

Using optogenetics, a technique for genetically modifying cells, neurons in this case, in living animals so that their function can be turned on and off with light, the researchers controlled specific neurons that had been active during positive or negative experiences.

The team was able to then evaluate how those particular neurons affect behavioral outcomes.

Those mice had been optogenetically modified so that the cells becoming light sensitive were only those that were most active during the positive or negative experience provided. For instance, the team was able to turn on only the positive-experience-associated cells to observe behavior in the mice.

"These cells are built differently," said Deisseroth. "They didn't start the same and then change their nature with recent experience. They appear wired specifically to communicate positive or negative experience."

Given the strong linkage between the prefrontal cortex and various psychiatric illness, he said the study opens the possibility in future studies to identify and target different cell types with diverse therapeutic approaches, including drugs or external stimulation techniques.