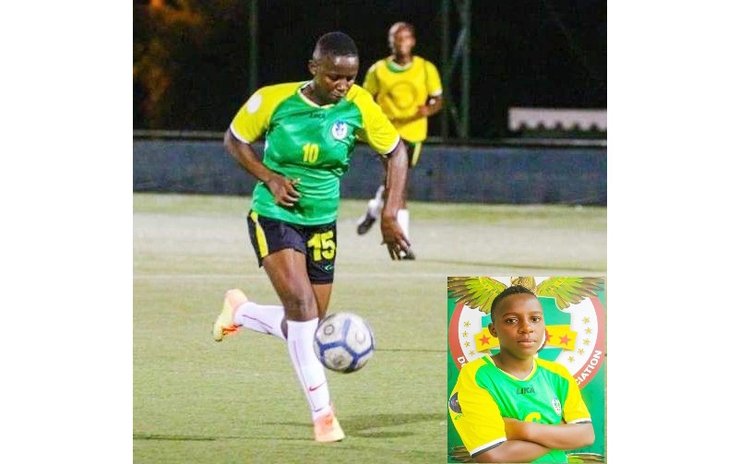 Kenisha Jno Lewis on the ball and in inset

National footballer Kenisha Jno Lewis grew up doing anything and everything when it came to sports.

Whether it was volleyball, netball, basketball, or cricket- you name it- Kenisha has probably tried that sport. But for some reason, nothing ever resonated with her. That is until she stepped onto the football field and immediately knew that she had found her sport.

The 15-year-old Third-form student of the Castle Bruce Secondary School (CBSS) revealed that since then, she has never doubted her ability to one day make it big on the football field.

Itching to excel in the sports, the young athlete who plays attacking midfield used every opportunity that she could to hone her skills, throughout primary and secondary school, which eventually landed her a position in the U-14 women's national team.

According to Kenisha, the journey to achieving the success that she has attained thus far has not always been easy, and on many occasions, even more so during the COVID-19 pandemic, the thought crossed her mind of giving up on sports.

However, the third-form student said that given the outpouring of support from family members, her coach, manager, and others who she plays with, as well as her determination to excel in football, giving up on her dream just isn't an option.

Though many may view it as just another sport, or a pastime activity, for Kenisha it is her greatest sense of connection and relief.

"I ensure that I practice every single day, even though it is just running, kicking a ball, stretching, I ensure that I keep my body moving, which also helps me to clear my mind," the athlete said.

To her peers who aspire to follow in her footsteps, the Grand Fond native encouraged them to develop her mantra that "practice makes perfect."

As to her goal, the teen hopes that future stellar performances will set a foundation that will allow her the opportunity to further her studies in sports, develop her athletic abilities and turn her passion into a full-time career.

This week's Sports Rising Star also has big dreams of one day playing with the Women Chelsea Football Club , which, she says, will assist in another one of her goals of making a name for Dominica in the sport of football.