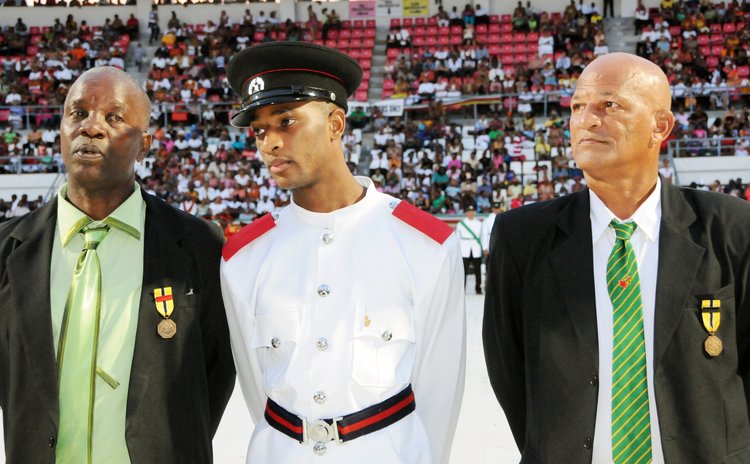 Jean Pierre Joslyn Prince: "I know what I did I didn't do it on my own It's 19 April 2013, the beginning of a not-so-ordinary day for Joslyn Jean-Pierre Prince. Instead of waking up and dressing to go to work putting out fires and rescuing victims, Prince is at home in Grand Fond getting set to travel to St. Vincent & the Grenadines for a football tournament.

He jumps into the back seat as they head for Roseau to join the remaining members of the Dominica team. They're chatting, listening to music, driving in the rain. They've reached Pond Casse without incident. Then the unforeseen happens, the black swan moment that turns the improbable into a numbing and terrorizing truth. Joslyn Prince is about to become trapped in the reality version of a horror movie.

"We just felt a sudden drop," he says in refection, as their vehicle is swallowed by a merciless and unforgiving ditch opened up by the waters of the pouring rain. Then everything goes blank.

He isn't sure for how long he's been out but when comes to, he realizes his colleagues, teammates, friends are motionless. He checks Hector for a pulse. There's none. Jno Hope is also dead.

As a fireman, Prince, 23, has seen death before. But this is different.

"It was shocking," he recalls. "In my job, I'm used to dealing with death…these are people I'm in football with my whole life. For 16 years I know Coach Hector." Prince must get of the muddy and open grave. He must force his way out of the vehicle. He must seek help, warn unsuspecting drivers that danger lurks and death is calling. He doesn't know how, but he escapes this uncompromising abyss that threatens to grab hold of him, squeeze the final breath out of him.

"The only thing I remember, I was lying on the side (of the road). I was dirty, dirty, but I cannot remember how I got there," he tells The Sun as he recalls the dreadful morning. "Jesus Christ was there with me."

Prince drags himself away from the ditch, takes off his blazer and uses it to try to get the attention of the first oncoming vehicle. He's ignored, but, fortunately, another vehicle is right behind it. This one stops. He asks the driver to get the attention of the person ahead by tooting his horn repeatedly. He does. The vehicle stops right before it gets to the ditch. Further death is averted. Still Prince doesn't believe he's a hero.

This is Joslyn Prince. Humble. Unselfish. Team player. You see it in the sport he plays. You see it in the profession that he has chosen. You can tell from his quiet, somewhat reserved, polite and respectful personality. These are the lessons the young Prince, his mother's third child and his father's fourth – he has three brothers and three sisters - learned from his mother.

"I learned from her to respect yourself first, respect the family and respect people; respect everybody," he says.

Born and raised in Grand Fond, Prince appeared destined to play football. For his school, his community, his country. As a young boy he would kick anything he could get his foot to. Whether at Grand Fond Primary or Castle Bruce Secondary, he kicked. And played. He watched his elders play and sought opportunities to join them. Football was his dream. A dream deferred thanks to that fateful morning.

And he would sing too. Probably because his mother sang. She was a calypsonian.

"Sing a little soca, a little reggae, you know. Just for fun."

He would have fun with his friends, play with them, but he never got into trouble, he proudly states. And he was serious about his education. He wanted to do well, he wanted to help take care of his family. At the age of 16 he lost his mother. He was in 4th form in secondary school and was on his way to write an exam when he got the news. He was devastated.

"When you get a news like this on the day you writing exams…it was crazy. I miss my mother every day."

But he pulled through and he became even more determined to do well at school, get a good job and help his family. So he stayed out of trouble and worked hard.

"After our mom died I needed to make money to help myself and my family. I told myself if I get good grades I could get a job."

He did. And, while job hunting, he did carpentry in order to remain occupied. Then in 2010 the call came from the fire service. It's what he wanted to do so it was a proud moment.

Prince still hangs out with his friends often, watching television. He also reads a lot. But, importantly, he's doing what he really loves.

"I'm at a job right now, it's a very good job. I just enjoy my job, I enjoy being at my work place and still want to play football."

It's an ongoing journey for Prince. One which took a different route on the morning of 19 April when a not-so-ordinary day became an extraordinary experience.