"Because the system is broken, people who are supposed to be protected [are abused]" 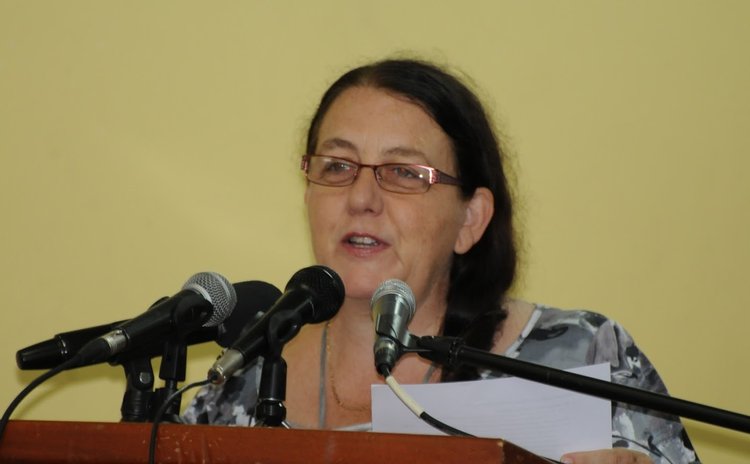 When a young Tina Alexander left the United Kingdom for a church holiday in Dominica in 1988, little did she anticipate how much the excursion would impact the direction of her life.

It was during that visit that she met a young man named Harrigan Alexander, and thus began her long-lasting emotional attachment to Dominica.

"I came back in 91, on my own, and met Harry again, and from 91 he was in bible school in Jamaica. I sold my car, sent him a ticket and the rest is history," she tells The Sun.

She has been writing her own history here since, engaging in charitable activities and becoming the spiritual and practical leader of a movement that speaks for the protection of children and women.

A conversation with Alexander reveals an interesting, passionate and committed individual. She speaks honestly, frankly and openly.

Yet, she is hesitant to accept praise for any of her achievements here, preferring to deflect compliments to others, such as the grouping of 14 non-governmental organizations, the Coalition for the Protection of Children and Youth.

"It's really a coalition and it's great. We are working together and I think it's better too that it's authentically Dominican."

Born in Surrey, a county in the south east of England bordering Greater London, she is the eldest of three – she has two brothers, one of whom is about a year younger, while "the younger brother is more like an afterthought".

She reveals little about life growing up, but there is little doubt they are close and remain connected.

By the age of 12 Tina had committed her life to Christ – "I was in Sunday school and I heard the teaching and wanted to commit my life to Christ when I was 12," she reveals – and everything she does appears to be driven by her devotion to the 'do unto others' principle of Christianity.

Yet, she is not committed to any single denomination, referring to her Lifeline Ministries as a parachurch.

"My life's been guided by my relationship with Christ. I'm a bit of a rebel - I don't believe I have any denomination."

This is evident in the ease with which she has been able to earn the cooperation and respect of the various churches.

They call her Sister Tina here, somehow linking her to the convent despite the fact that she does not wear a habit. But this is fine with Alexander, if not her husband of 23 years.

"The nuns have a very good record here, I don't object to people thinking I'm a nun. My husband minds – he likes me being his wife."

As a counsellor, Alexander, who worked in the psychiatric unit as a psychiatric social worker for seven years, and who graduated with a master's degree in counselling from the University of the West Indies in 2005, has heard many a story of abuse.

This is what influenced the decision to bring together the Dominica National Council of Women, Lifeline Ministries, Love One Teach One, the National Youth Council, East Dominica Children's Federation, West Dominica Children's Federation, Child Fund and AGANAR to form the coalition. The last two no longer operate here and others have since joined, giving a greater voice to those who cannot speak for themselves.

This could be anyone, from children to people living with HIV to men and women facing abuse.

"Because the system is broken, people who are supposed to be protected [are abused].

"It bothers me when I hear [stories of abuse] from anybody whether they are under 18 or not. It bothers me even more when the perpetrator is still alive and the victim has to keep facing them for years without justice," she says.

It is this mission that led to revelations of the allegations of the sexual abuse of a child by three well-known men.

The child had gone to see Alexander on another matter and disclosed her experience during their session.

"If a child tells me they are being abused, I tell them I have to do something about it . . . . So once I was clear what she was disclosing I took her to the police station.

"So I can't say I'm behind it [the revelation]; I supported her because the system is skewed against the victim."

In the eyes of many, it is Alexander's relentless pursuit for justice for victims of abuse that led to the recent passing of a bill by legislators to amend the Sexual Offences Act, giving Dominica some of the toughest penalties for those convicted of sexual offences.

However, she will not accept compliments for it, insisting it was all the coalition.

"All our recommendations were included. The committee that put it together was remarkable in its efficiency," she says.

Before Alexander came here nearly 30 years ago, she did not even know where Dominica was. Today she feels more Dominican than British, and more committed than ever.

"I don't fit in very well in the UK anymore. I'm Dominican by choice. A lot of people think of leaving Dominica, but I don't intend to leave," she says.

Alexander's Lifeline Ministries runs a Home from Home programme through which its operational costs are funded. One of the three cottages is located in Sylvania.

"I think I should be buried there," she says, in what will be her everlasting link to Dominica.