Massive construction is ongoing at the childhood home of the writer Jean Rhys, but the building's current owner remains a mystery 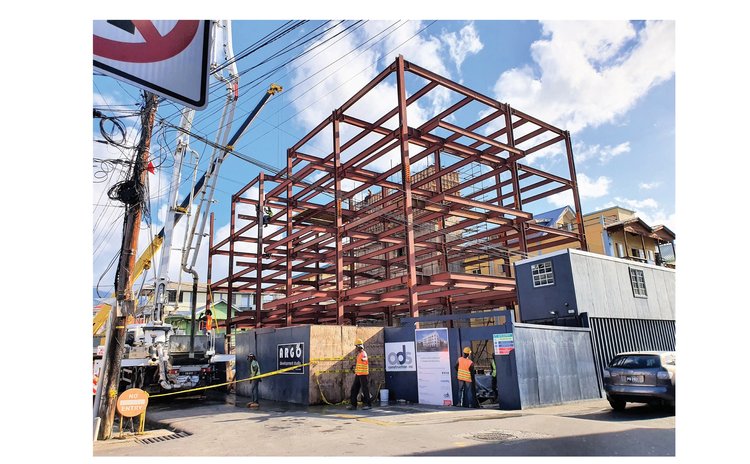 Who's building? No answers to many questions- building under construction on Independence Street, Roseau

Anyone traveling on Independence Street, near the National Cooperative Credit Union (NCCU) will have noticed that for the past week, there has been a major inconvenience not only to pedestrians but to motorists as the street leading up to the National Lottery has been completely blocked off.

One will also have noticed that on the property of the former childhood home of Jean Rhys, the famous Dominican writer, the landscape is now marred by this massive structure which upon completion will be one of the tallest buildings in the city.

But as this huge construction continues on this site which garnered several negative local and regional attention last year, questions are being asked about who is the possible owner(s) of the property. But in the Sun's search for answers, everyone we reached out to seems afraid to talk or is being kept in the dark on who the new owners are of this controversial property.

A billboard placed on the entrance of the construction site reads Client: Prime Star Real Estate Corporation; Architect: Argo Development Studio; Engineer: RW Consultant and general contractor: ADS Constructions Inc. When contacted individually, a representative from each of these companies either declined comments or informed the Sun that such information was "confidential" and could not be released.

The Physical Planning Division (PPD), the government department responsible for administration and operation of construction island-wide also could not provide the Sun with answers, stating that their Chief Executive Officer (CEO) was the only one who would be able to assist, but had resigned a few days before our phone calls.

We also contacted the Roseau City Council and the Ministry of Housing, and we were given the same information from senior heads: we are not sure who owns the property.

Employees on-site informed the Sun that they have allegedly seen the project manager of Montreal Management Consultants Est. (MMCE) on the construction site on several occasions. However, when called the company stated, "we are not the ones working on this project."

A source also indicated that the building is owned by telecommunications giant Digicel, but this rumour was quickly debunked by CEO Nikma Jno Baptiste Royer when contacted by the Sun.

In the early 1980s, following the death of Rhys's father, the house was sold to an inter-island trader named Vena McDougall, who turned the building into Vena's Hotel. She recently passed and family members could not be reached at the time of press.

The Sun has also been told that the property is now owned by an offshore investor, which at the time of press we were unable to verify. Countless attempts have also been made to speak to the parliamentary representative Melisa Skerrit via phone and in person but all proved futile.

This, of course, is not the only instance of historic buildings being pulled down in the quest for modernisation, only for many to regret the demolition and mourn the loss of our heritage. However, Anthony Leblanc, President of the Builders and Contractors Association (BCAD) argues that there are laws in place to protect such sites; however, over the years, they have been ignored.

In the meantime, the house, which once stood for perhaps 150 years is all but gone, as well as any remnants of Rhys. The only proof that the next generation will have that the property once belonged to the family of the famous writer is the name: 'Sargasso House Commercial Building,' which pays homage to her 1966 book "Wide Sargasso Sea" which gave Rhys worldwide attention.

To quote a passage from Historic Roseau, written by Dominican historian Lennox Honychurch published in 2000, in commenting on the house and its literary associations: "Unfortunately, there is little to show inquisitive visitors. Soon perhaps there will be nothing…. Once again, here in Roseau is an example of yet another lost opportunity to capitalise on our historical and, in this case, our significant literary connections."