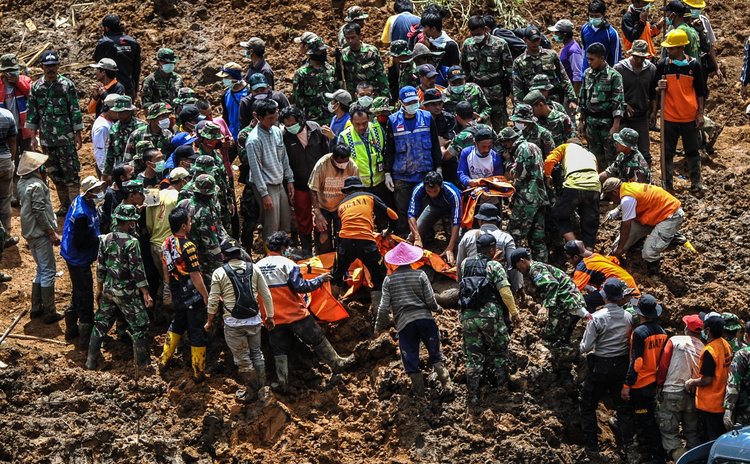 BANJARNEGARA, Central Java, Indonesia, Dec. 15 (Xinhua/Sun) -- Survivors of a deadly landslide in Indonesia's Central Java province on Monday tearfully recalled the moment when they had to part from their loved ones after such a tragic event.

Many of them lost numerous family members and their belongings after waves of mud swept away the hamlet they had been staying in for years. The Indonesian authority said that tolls from the havoc had reached more than 100.

Bini, a 42 year-old mom, barely able to control her emotion when she recounted the horrible moment as she saw with her own eyes how mud ransacked her house where her husband and her youngest child were in it.

Bini was attending a religious event in a different house that was not affected by the landslide.

"People came out from the house when we heard rumbling noise. We saw piles of mud ransacked from ravine that stood not far from my house. I saw my house rammed by the mud and swept away in pieces. At that time I knew that my husband and my youngest son were in the house," Bini, whom like most Javanese only uses one name, broke in tears when she told Xinhua on Monday about the ordeal.

She was calmed down by her relatives who were in tears themselves. Bini was among tens of families evacuated to a shelter in Ngaliyan village along with the other ones affected by the disaster.

The mother of two said that her elder daughter survived as she was in her friend's house that was far from their Jemblung hamlet, Karangkobar village. The daughter is now stayed with her relative.

Bini stays in the shelter to wait for information about her husband and son, which largely amounts to whether their bodies were found.

Jemblung hamlet is the area most devastated by the disaster. Most of those living in the hamlet were buried alive with about four meter-thick mud from the landslide that occurred on Friday last week.

Bini knew that chance to see her husband and her son alive was thin. With her trembling voice and tearful eyes, she said she only wanted to bury them properly in a grave yard so she can visit their graves when she misses them.

Another survivor from the deadly event was Tuklani, a 65 year- old man who lost nine of his family members. Tuklani was in his house with his wife, children and grandchildren when the mud hit his house.

"It was unexpected, the mud came forcefully. I cling on to a pole at my house, helplessly saw all of nine people in my house swept away by the mud. My position was protected by a corner of strong structure," Tuklani told Xinhua in Ngaliyan shelter.

The wrinkled elderly man said he managed to climb up the pole and came to surface. He later found another survivor nearby, a pregnant mother.

"I heard a woman's voice asking for help. So I looked to the voice's direction and saw her. I came to her by holding fallen trees and branches. Finally I found her. I shouted for help but nobody replied," Tuklani said, adding that he brought the pregnant woman to safety and looked on to the mud that totally covered the place they used to live in harmony.

"We were saved by initial rescue team late at night. The woman was crying all the time calling her husband. I intend to come back to the point that I thought the place of my house to look for my families. But later on I knew that the ground was too muddy to step on," Tuklani told Xinhua with his watery eyes as he recalled the moment of founding himself so helplessly incapable of saving his loved ones.

Tuklani's daughter, Sutini who was with him at the shelter asserted that one of those ill-fated people was his 18 year-old son. She works as a peasant in Kuningan, Cirebon West Java, and quickly returned home after she was informed about the calamity suffered by her family.

"I came to the bus terminal, asking the driver to get me to Banjarnegara. I gave him my money that I had left which was not enough to pay the bus fare. The bus driver was a very good man as he pitied to situation that I face. He let me to go along with the bus for free," Sutini told Xinhua.

She added that she went to the rescue team command post to check the list of bodies already found by rescuer teams to see whether they already found the body of his son.

"I really miss him, I haven't seen him for months," she said with breaking voice before bursting into tears. Tuklani calmed her down, reminded her to let the God do his best for her son, who is also his grandson.

Jemblung hamlet was an unexpected area to be hit by the landslide. Regional Disaster Mitigation Agency had warned villagers in other villages near Jemblung hamlet considered prone from landslide.

The landslide occurred after three days of non-stop heavy downpour there.

The mud that destroyed Jemblung hamlet came from a 800 meter ravine that standing tall behind the hamlet. The landslide also swept away cars and motorbikes that passed through the hamlet when the event took place.

Anwar, an armed forces troop tasked to monitor the rescue efforts said that there is no chance that any survivor will remain alive after being buried for a few days in the location. The rescuers were now tasked to discover and evacuate bodies which have started to decompose.

As of Monday, the rescuer teams managed to discover 56 bodies with most of them still unidentified. The rescuers were now focusing on finding the remaining 52 missing ones.

The Indonesian authority has announced that the search and rescue efforts would be stopped on Dec. 19.