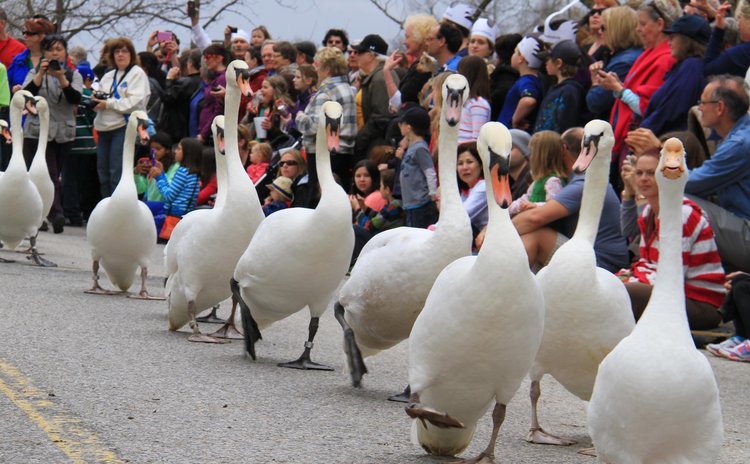 TORONTO, April 13 (Xinhua/Sun) -- No one could be more excited for the arrival of spring than the two dozen royal birds in Canada's Stratford, who've had to wait an extra week to kick off their annual mating ritual.

Every year, the royal herd is released from their winter quarters and into the Avon River during the Spring Swan Parade in the city 150 km west of Toronto, in the first week of April. But due to the unusually cold spring weather and the icy river conditions, they've had to stay put in their pens while nature ran its course.

This Sunday, the city's 28 feathered residents, including 26 mute or white swans and two Chinese geese to lead the herd, finally emerged for the long-awaited tradition, with thousands of spectators lining the street to watch as they waddled and honked their way into the river.

It could've caused some chaos if they'd waited any longer, said Quin Malott, manager of the city's parks and forestry.

"The weather was cold enough that they weren't starting to nest in the pen," he said. "Sometimes if it gets quite warm they will start to build their nests inside the pen, and again, (their) real territorial and it's a very small area, so that's when you got to get them out before it gets too aggressive inside (and) they start beating each other up."

Since 1990, visitors across the province have travelled far and wide to the southwestern Ontario city, most known for Shakespearean theater at the Stratford Festival, to see the majestic animals come out of their winter quarters to mark the unofficial start of spring.

Cathy Rehberg, the Stratford Tourism Alliance's marketing manager, explained that they've been herding the pinioned swans into the river for years, which is how the Swan Parade came to be.

"It started actually as just a very practical thing because swans have to get from their winter quarters to the Avon River where they will start their families," she said. Swans have been a part of the city's history for nearly a century, boasted Rehberg. She said it all started back in 1918 when they received their very first pair of swans, and another pair again decades later, gifted by the Queen of England.

"In 1967, Canada's centennial, Queen Elizabeth II gifted Canada with several pairs of swans, of which one pair was given to Stratford," she said. "So I guess you could say we have some royalty in our swan herd."

The city's two species, mute swans and black swans, have become a big part of Stratford's identity since.

The swans, many of which have called the Avon River home for years, are usually herded into their winter quarters right before Halloween until the start of spring.

Malott said they have six full-time staff around all winter long to care for the swans, which is usually more than enough for the low-maintenance birds.

"We feed and keep open water for them, and if there needs to be any vet issues we bring them to the vet, but they're probably a simpler animal to take care of really," he said. "Just open water and food."

"You think of Stratford, you kind of think of swans," stressed Malott. "It's on our flag, it means a lot to a lot of people."

Many like Sherri Agar, who's lived in Stratford all her life, have developed a deep connection with the long-necked residents, and has taken it upon herself to protect them.

"Since I was little, my parents brought me, and then I brought my children, and then now I volunteer with the swans just making sure that they're safe, making sure people aren't throwing garbage or feeding them bread when they're on the nest and just, their general health is OK," she said.

It's all volunteer work, but Agar doesn't mind it one bit. "It's Stratford, it's the festival, it's who we are," she said. "It wouldn't be Stratford without the swans, you know."