Jump Ball No. 47. By Arlington James 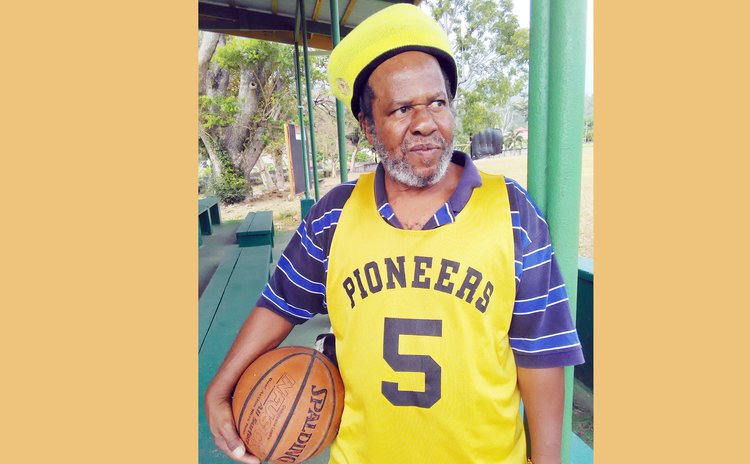 Many may remember him strutting the streets of Roseau on Carnival Tuesday afternoons together with his 'padna' Herman 'Prooms' Shillingford displaying their dreadlocks which flowed down beyond their calves. Others may have brought a pair of shoes for him to repair on their behalf.

The local press once described Sylvester 'Tata' Joseph as 'diminutive' on account of his height – or lack thereof. Granted, at 5ft 2in he is short, but he was quick and sleek on the basketball court where he was well known from the 1970s through to the late 1990s.

Tata, a native of Dubique near Grand Bay, attended the Roseau Boys School. He learnt to play basketball on the St. Mary's Academy (SMA) court and was trained by Bro. French from the SMA.

But more importantly, however, over Tata's 20 plus years in competitive basketball he played with a whopping nine (9) teams in the national league!

He debuted in the DABA league some time before Hurricane David, playing in the Juniors Division (2nd level division) with Lakers. Their opponents included Pros Jr., SMA, DGS and Pioneers – Dominica's first women's basketball team. He was adjudged MVP on Lakers' team.

Sylvester next moved to Bullets, which also played in the Juniors Division. His teammates then included Michael Casimir and brothers Albert and Rolston Lawrence, among others.

Point Guard Tata first played in the League's senior division (Division I) with Wizards, together with Julie Francis, Kelvin Cuffy, Peter Seraphine and others. He played with Wizards in two stints, having left the team to move to other senior teams. While with Wizards, they defeated the record-setting Cardinals to capture the 1984 Knock-Out Championship.

Another uniform that Tata donned was that of Brisbane Starlights where occasionally he was a high-scorer and chalked up an impressive 25 Pts in one game. That particular season he was the Division I League's 6th highest scorer with 135 pts by the halfway point in the competition.

Cardinals was Tata's next team, and he recalls harassing their opponents' big men with his speed and agility. While with Cardinals he won a shooting competition in the 1980 Season Opener where the competitors were made to shoot several long shots.

But would you believe that in 1980 Sylvester 'Tata' Joseph, who could only touch the net or the backboard with his best jumps, participated in a Slam Dunk contest? Of course, he did that only to entertain the crowd at the Season Opener.

Tata played with Cardinals when they toured Pointe Noire in Guadeloupe, and later St. Kitts.

Following his two stints with Wizards and his five seasons with Cardinals he then wore a Harks uniform where he played with Edgar Robinson, Jeff Jeromy, Ashworth Daniel, Michael Casimir, Dave Williams and others.

In the mid-1980s Joseph joined Owls, teaming up with Wilmoth LeBlanc, the high-scoring George Bruney and others.

Subsequently following the dissolution of Harks Tata became a founding member of Blazers in the early 1990s, and spent two seasons on his new team with Lyndson Lynch, Carlisle Green, Ashworth Daniel and others.

Sylvester made his exit from the national league around 1997 as a member of Pioneers (men's team) in the 2nd level division after assisting teammates Cuffy Alcid, Bernard Thomas, and others win a League Championship.

Looking back, Tata related that during his playing days he had been approached by Eagles, Pros and Flames to join their ranks but declined their invitations.

Apart from playing in the national league Tata also participated in several community "off-season" leagues. He was a member of Sports & Wear Reefs in the Roseau Off-Season Basketball League in 1984; Sun Risers in the Fond Colé League in the 1990s; Pioneers in the Soufriere League in the 1990s; and a Dubique team in the Grand Bay League. He also played in the Roseau Improvement Committee (RIC) Basketball League.

Joseph also participated in 'friendlies' with Cardinals, versus Pros, at the opening of the La Plaine Basketball Court and with Pioneers in the Lambert Henderson Memorial League after "Lambie's" passing.

As a sharp-shooter, Tata recalls sinking 51 consecutive free-throws in an afternoon "Foul-Shot" session.

Although Sylvester was called up for selection-trials to the Senior National Team on a few occasions, for reasons he was never successful in making the team. However, he represented Dominica on the Junior National Team and while on Cardinals, he played against the Logans team from the United States.

Tata, now walking with a limp, enjoyed his time on the court and notes that he enjoyed playing against Pros who had Anicet Moore, Gary Moore, Lambert Henderson (deceased), Stephen Bellot (deceased) and others in their ranks. Jump Ball wishes Tata all the best.