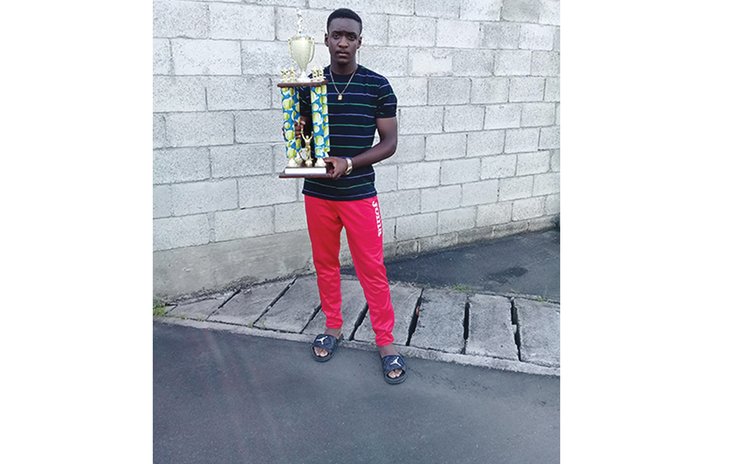 Tahj Tavernier's dream is to play test cricket for the West Indies.

This 16-year-old batsman is one of Dominica's most promising young players and he is highly praised for his commitment to both cricket and schoolwork.

He was among the first players selected for the Dominica Cricket Academy set up in 2014 to promote cricketing excellence, hone young cricketers' talents and prepare them for international games.

Tahj said he has been playing cricket competitively since he was nine years old when he participated in a primary school tournament.

He was first selected to play for Dominica at the age of 10 and made his debut in local First Division cricket at the age of 12. At that time he was an all-rounder bowling off spin.

Tahj said he played at the U-13 level for Dominica for four years then moved up to the U-15 level. He was selected for the Windward Island team twice and was vice-captain for one year.

"I have goals. To make the West Indies U-19 World Cup, that's a short term goal. I also have dreams of playing for the West Indies, playing first class cricket…" Tahj said.

Tahj is a keen admirer of international cricketers AB DeVilliers, Virat Kholi, Steve Smith and Sachin Tendulkar, and he hopes to emulate their outstanding achievements in the game.

Asked how he became involved in cricket, Tahj replied that members of his community enjoy the game, often playing on the road. "So it's like a part of me," he said.

Indeed, cricket is in his genes. His father played cricket with him at a young age and his brother Ursan Tavernier, his uncle Christian Tavernier and another relative, Mervin Matthew, are all cricketers.

Tahj dearly wants to be a professional cricketer, but in the meantime, his mom Catherine Tavernier said she insists that he gives as much attention to his academics as he does to cricket.

Balancing his schoolwork and cricket can be a bit challenging, Tahj admitted, especially since he entered fifth form.

Director of the Dominica Cricket Academy and captain of the Windward Islands cricket team, Liam Sebastian said Tahj is a highly talented player with good temperament on and off the field.

Sebastian said the Dominican cricketing prodigy is on 'senior national tryout' and has a good chance of making the national team soon.

The Windwards cricket captain lauded Tahj for having a positive, focused attitude to the game and for being equally dedicated to both cricket and schoolwork.