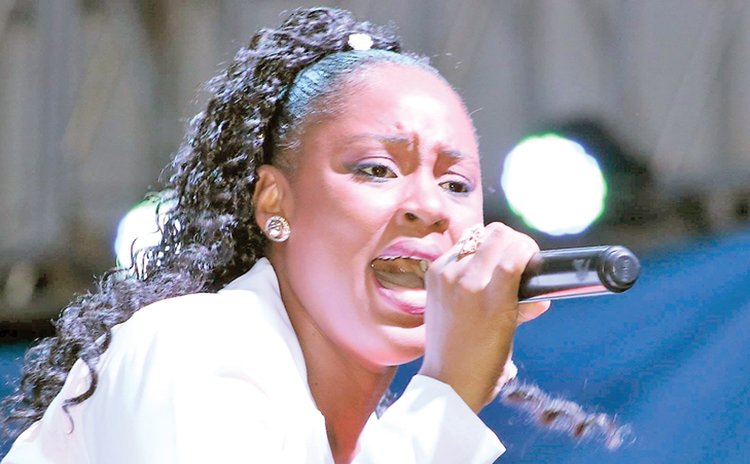 No longer can Calypso only be considered "big man ting,"; not with Tasha P around.

And that is fitting because last week Dominica joined the rest of the world in celebrating International Women's Day under the theme "Gender equality today for a sustainable tomorrow."

This year's campaign was represented by the #BreakTheBias hashtag and calls on people to work towards a world that is equitable, inclusive, and free from bias and discrimination so the playing field is leveled for women moving forward.

In light of this, The Sun features Tasha Peltier, Dominica's first and only female Calypso monarch as well as the reigning Virtual Monarch who continues to make great strides in the male-dominated field.

Since the Mighty Kon Lambi of the 70s, the Calypso scene in Dominica has seen a proliferation of women in the art form.

Avis "Lady A" Bruno stood alone in the late 80s but later came the likes of Jahlee, Mystic Rose, Swinging Janice, Silver Sands, Singing Janet, Mighty Suzie, Bouncing Bonnie, Yakima, Tarina, Lady Star, and others who all contributed to the initial growth of females in Calypso.

When the name was rechristened from Calypso King to Calypso Monarch in 1995, this paved the way for the women to compete alongside the men.

In recent times quite a few other women have emerged and though many tried none were successful in making history in the calypso arena like Tasha P.

For the front-line singer of Swinging Stars Band and a senior member of the Sisserou Singers, it all started at the junior monarch competition.

Speaking to The Sun, her excitement was palpable as she briefed us on her journey to stardom in the Calypso arena.

She recollected that after having joined the Swinging Stars Band in February 2009, she was then encouraged and persuaded by several of her bandmates to participate in the elimination round later that year for the 2010 Calypso season.

"I never thought that I would end up in the Calypso arena because I always had this notion that Calypso is 'big man ting.' But apart from the persuasion, I did back-up for some calypsonians both here and overseas and it gave me a different perspective on what the art form was about," Tasha P stated.

Two years later she made history in Dominica by not only becoming the first female monarch but also as the only calypsonian on the island to win three titles in one season – Calypso Queen and Stardom Monarch of the Tent.

Admittedly, Tasha P said in her first two years on the Calypso scene she felt intimated in the male-dominated field.

"In the beginning, there were very few females and the number of women in the art form was decreasing so at times I felt a little out of place," she said. " My first year I sang "He's a Boy '' so I got some backlash and criticism, even when I won in 2011 with "Woman Time". But intimidation is now a thing of the past. I have solidified my place in the art form."

Tasha P who yet again made history this year by being crowned the first female Virtual Monarch, days after winning Stardom Tent vowed that she will continue to pursue the call for more women in Calypso.

"I was really excited to see that this year we probably had the highest number of women participating in the competition," she said. "There is so much potential in Dominica for female calypsonians and I don't want them to feel that it's just about Tasha P."

She continued, "the doors have been open for them to walk right in and I don't want to go down in history as the only female monarch; it started with me but my vision is that one day very soon this will not be a male-dominated field but we will be on an equal playing field and we will have more women in the art form."

Despite the predominance of males in Calypso, Tasha P says inclusiveness allows for greater diversity and greater promotion of Calypso.

While she welcomed the women to the field, she encouraged those interested to be always willing to learn, to take correction, to stand firm but to know when to accept defeat especially when it is rightfully earned.

"We should never limit ourselves because we have greatly impacted several sectors of society and I believe that Calypso will be further advanced with more women involvement," the 2022 Calypso Monarch said.