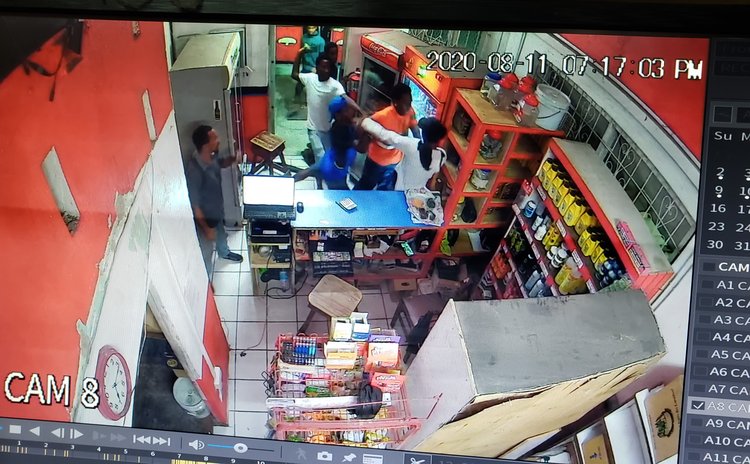 A gang of teen boys ran into the sales area of the Lindo Park gas station on Tuesday (August 11, 2020) at about 7.30 pm and their intentions were dangerous.

"One of them seemed to be the target of the anger of the other five or six and they were chasing him," said David Coriette, the proprietor of Lindo Park Gas Station. "The gang chased him into the station and attempted to stab him with what looked like a knife or scissors. They threw several punches at him."

A video of the incident from a surveillance camera showed a young man under attack cowering behind a cooler as the others tried to get to him while a male member of staff of the gas station tried to control the violent young men.

The gang then pelted stones and bottles after the young men who was hiding in the gas station. A female gas attendant was slightly injured. "I called the police to report the incident because the young fella was afraid to leave the gas station to go out because his attackers were lurking in the neighborhood," Coriette said.

But the police did not turn up then, or later.

"What concerns me is that some of the young people of today seem to think that they can do anything and get away with it," Coriette said. "And if the police do not intervene and try to identify those guys and then speak to them, letting them know that they will not tolerate that sort of behavior, this sort of thing is just going to continue and escalate and this is not good for business people. Besides someone dying, it affects my business."

Coriette said that this is not the first time that this type of incident has occurred.

"There were young guys that used to terrify my customers," he said. "If we allow these youngsters to get away with that sort of thing it emboldens them- they feel that they can do it again. And somebody is going to get hurt."