Sex is not for children, says Tina Alexander 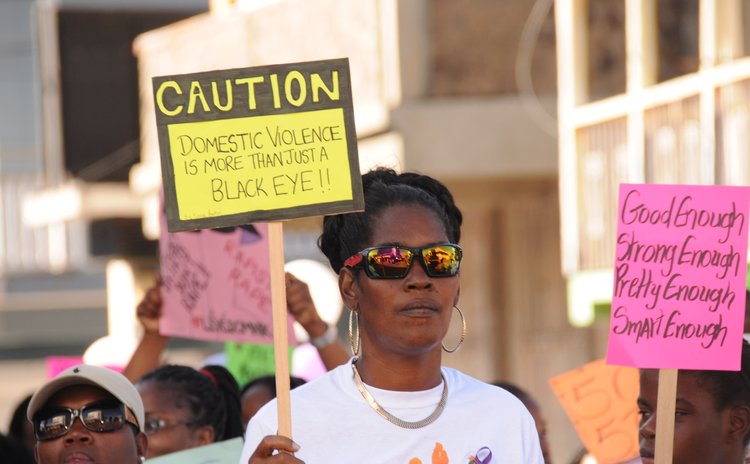 Participants of the Lèvé Dominique "Reclaim our Streets: Women Solidarity March" at the Bay Front, Roseau on Saturday 25 March 2017

If you are a teenager and you are having sex, whether you consent or not, you are participating in a criminal act.

Alexander said when a teenager is saying "yes" to having sex, she's really saying "no".

Alexander was one of a few speakers at Lèvé Dominique's, an advocacy group, "Reclaim our Streets: Women Solidarity March" in Roseau on Saturday afternoon.

They then gathered near the cruise ship berth on the Dame Eugenia Charles Boulevard and listened to solidarity messages in a late observance of International Women's Day observed worldwide on 8 March.

Reciting a poem about gender-based violence was Shyanne Dorsett, the 2017 Dominica State College Miss Mas Jamboree, who said: "I will not Photoshop the truth"…or re-size the reality…or adjust the contrast of the situation to make it appear brighter.

Yvonne Alexander, a police officer, the feature speaker, who described herself as "a survivor and advocate" against gender-based violence warned women that they must protect the gains that women have made since the early 1900's, when women voted for the first time.

"These gains can be jeopardized by our action or the lack thereof," she said.

At the end of the event the organisers presented Noreen John, an attorney-at-law and Helen Royer, the permanent secretary in the ministry of gender affairs, with the 2017 Exceptional Women Award.