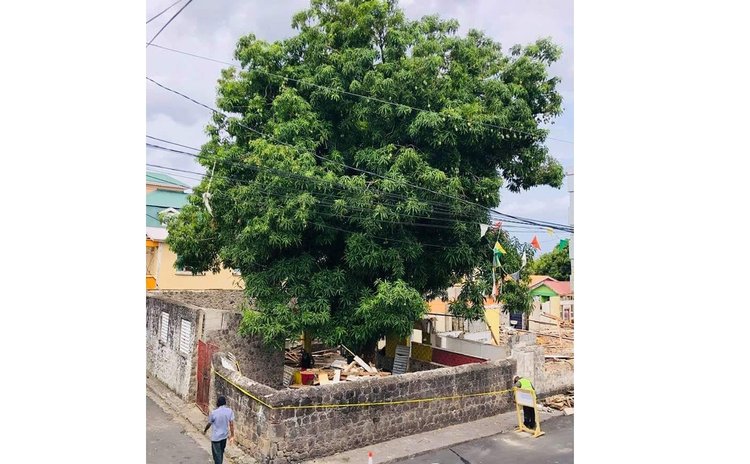 In her report in "Repeating Islands" about the demolition of the childhood home of the famous writer Jean Rhys, located at the corner of Independence Street and Cork Street in Roseau, Polly Pattullo mentions an imposing mango-long tree, at least 130 years old, which stood on the property.

It is no longer standing.

"It, too, featured in Smile Please: 'I walked out of the sun, into the shadow of the big mango tree. I laid the fair doll down… Then I searched for a big stone, brought it down with all my force on her face and heard the smashing sound with delight.'

That was Jean Rhys.

Now, artist Arnold Toulon, who was raised in a house just a few yards from the mango tree, has written a moving poem about that tree which we publish here with his permission.

Lay the branches under Sargasso leaves.

Let its smoke rise over Roseau.

Such A disappointment it is.

Bury it with Kalinago bones on that Roseau Delta...

With the rivers reeds.

Let the Spirits sing their eulogies.

That's not your business.

And go about your business.

Waiting for your next disaster.

Chop it down with your wicked hands.

Call your grandkids to work with ties and cheap perfumes on its grave.

Trample on every petrified branch.

Erase her name with red erasure.

Leaving smears on your history non-books.

Let the winds send its ashes to North and South.

That they may taste

Saltpetre on their parched lips in the drought.

Sing not a note when you hear her fall;

And your skin crawls.

It's just a stupid tree.

A tree that you never knew from your country house.

A perversion on the dot of a map.

Let it flatten itself with worm and Ant

Hear its echo as it falls.

Then go about to your fakery.

To your friends who now turn away;

We have shot the largest Bear!

We have caught the heaviest Marlin!

We tame this Earth with our hooks and ploys!

I have killed the largest of God's Creation!

Surely, I am worthy of mention!

In the biggest publication!

I am a whore for exploitation!

Did you hear when its mangoes dropped on rainy nights?

As they hit the roof where stories were wrote. Who cares?

Did you sit in its shade,

And converse with Sealey and travellers ?

But that's besides the point.

Just wood and branches and leaves with

Chlorophyll- happenings and refuge for nuisances like birds and thieves.

Before developers change their pennies of promise.

Expulcate Jeans Ghost before it creeps down Cork Street and awakens Harold;

Or beseeches him to send cardboard letters to England.

Whispers on paper that may reach Bristols shores.

And warn and betray our purloin.

Let the huskin begin with a blow of the Conch-shell.

Let's thrive on the sensation.

I have a limb of this tree!

Let's set it on the mantle with the old yellow photos of uncle joe.

Scour that tree from the face of Town.

We prefer dust and concrete.

Throw these stones back to the river where they belong.

Let these mango juices blend with the passing clouds and be away from us.

Destroy that purveyor of yesteryear.

We will build something in its stead.

With square corners and lasting rooms.

Without the chatter or nuisance of useless stories.

Let's cover it quickly with lies.

Let it be surfaced with a new façade. Simple and stark.

Not a green leaf to see.

Not a bowed branch to offend.

We have our dust.

Our emptiness will be filled with wise fools and wires.

No more the senseless swaying of boughs.

Or the tell-tale mentions of weather changes.

No more the incessant bearing of heavens nuggets.

No more the sighing of ages.

Free from this monstrosity.