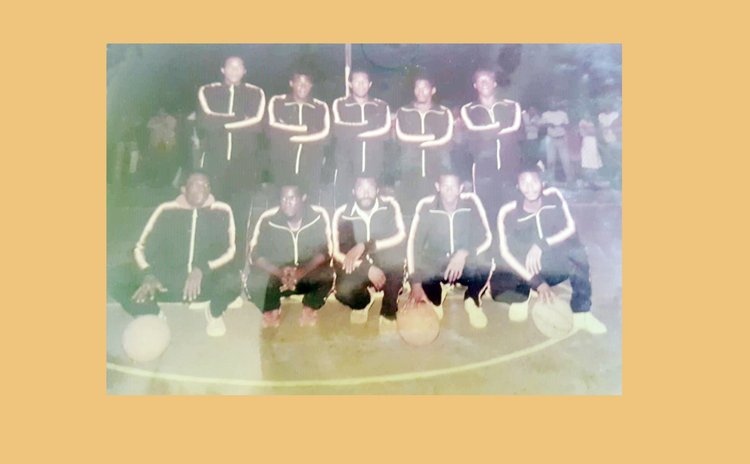 J.K. EAGLES I were placed 2nd in the 1984 national basketball league

To date at least four groups of non-Dominican birds have influenced the naming of teams in our national basketball league. Cardinals and Falcons were the first to arrive, gliding in together in 1968. Fifteen years later they were followed by Eagles, but by that time the Roseau-based Falcons had departed.

In 1997/98 another Falcons team, this one from Canefield, visited briefly and more recently, still another set of Falcons landed on our basketball courts, in 2012; the latest Falcons come from Pichelin.

Blue Jays (from Fond Colé), Owls (from Roseau) and Hawks (from Trafalgar) did also snatch some prey in local basketball in the mid-1980s.

To date at least five Eagles teams have participated in Dominica's basketball league. The first two were Roseau-based and landed on centre-court in the early- to mid-1980s; these were named after a brand of leather-top sneakers.

The '80s Eagles were succeeded by Paix Bouche Eagles in the late 1990s, and recently by Super Eagles, also from Paix Bouche. The latter team was still active in the incomplete 2017 edition of the national basketball league.

The late 1990s had also seen Stafford Morancie Eagles from Trafalgar participating simultaneously, and in the same 3rd Level Men's Division as the 1990s Paix Bouche team. This article, however, will focus on the Roseau-based Eagles.

It must be noted that Alexander, David, King, Lee, Moreau and Thomas had been members of Lee Wind Ambassadors and in the opinion of many, that team transformed into J. K. Eagles.

They debuted in the Senior Division and two years later were joined by their younger 'brothers' in the Intermediate Division.

Perry Payne recalls that Eagles I first season brought them mixed results, with the team winning only a few games and were never in contention for any of the major trophies at stake in 1983.

For example from available published match results, in Eagles' inaugural year they received at least two blow-outs, including a 40-Pt plucking from Pros (52-92) and a 25-Pt thrashing from Harks (37-62). They had also gotten burnt by Flames (50-70), but narrowly lost to Cardinals (54-59), a team that would soon become their arch-rival as Eagles challenged for championships in future seasons.

In their first of two meetings with Harks however, they defeated the latter 55-44, while in another encounter Lions "fled the scene against a determined JK Eagles attack" at 68-50, with almost 3 minutes of playing time remaining on the clock (The New Chronicle, 25th June 1983).

After their first season, amidst much pressure and shoo-shooing among basketball fans as well as from players on other teams, a few of Eagles' founding members hastily withdrew from the team. However, from Year 2 and over the next three seasons, several new 'brave' players ignored the negative comments that were shooting around and proceeded to join the J.K. Eagles convocation.

The new-look, strengthened J.K. Eagles flapped their powerful wings forcing other teams to take notice as they became a force to reckon with. Perry recalls that in their second season (1984) the team lost only their first game, to Pros; they had played that match in the previous year's uniforms.

He revealed further that by the time Eagles played their second game in 1984 their new outfits had arrived and thereafter, playing in their spanking new black uniforms with orange-and-white trimmings, the team did not lose another League match for that season.

There were only 7 teams in Division I that year and the League was run on a single-round, Round-Robin format.

Perry lamented that Eagles were cheated in 1984 as they were to have been crowned League champions that year. However, due to an apparent misinterpretation of the FIBA Laws by the Basketball Association the championship was wrongly awarded to Flames. Both teams had ended the League with similar win-loss records, but Eagles had defeated Flames when they met. That gross error was never corrected by the Association.