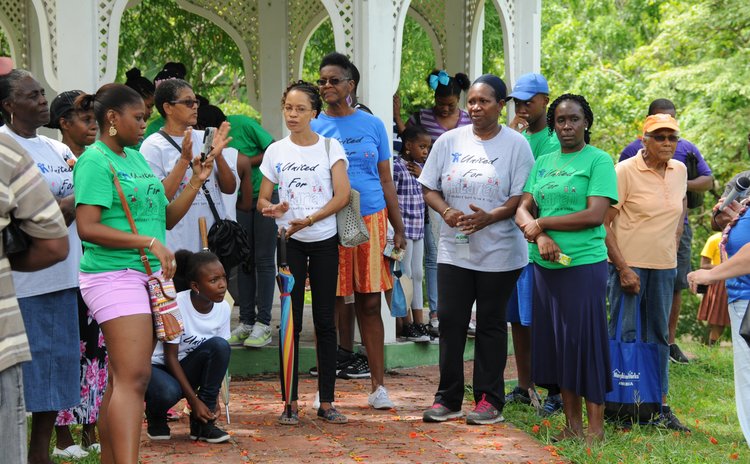 Sensational events such as the abduction of 13-year-old Kernisha Etienne of Warner never fail to grab the attention of the nation. But you can bet your life that as soon as the heat is off, and the problem is solved, we quickly get back to normal and forget that we live in a society where the abuse of children is as normalized as going to church on Sundays.

For example, as the Kernisha situation grabbed the headlines, and politicians and businesses fall over each other to eat a piece of the attention pie we forgot the recent incident where a prominent entertainer was charged with six counts of sexually abusing a 15-year-old girl and, more importantly, the alarming increase in the number of cases of sexual abuse of minors that recently prompted the opposition United Workers Party (UWP) to issue a statement calling on the society to take action to stop this runaway train.

"The United Workers Party condemns all forms of abuse against our Nation's children and calls for the mechanisms to be put in place to institute a Family Court, which would allow for due process to be expedited in matters pertaining to the care and protection of children and young persons. Eliminate the number of cases within the legal system languishing for over half a decade or more", the statement said.

Brutalizing children under the guise of disciplining

But this is not the only occasion that organisations in our society have sounded the alarm about the increase in the abuse of children and then forget it soon afterwards. We recall that in 2002 High Court Judge Errol Thomas said he was "outraged and dismayed" by the behaviour of a man who pleaded guilty to having sex with three minors aged six, seven, and eight years old. Two decades later, the dismay and outrage continue.

By the way, at the end of the case, Judge Thomas sentenced the man to eight years in jail; the maximum sentence after being found guilty of committing that offense is 25 years.

But, we have argued, that it will take much more than the court to stop that abomination of abuse of children. Because child brutality in the guise of discipline seems to be everywhere in Dominica, in public, and in the privacy of our homes. It seems to be okay in modern Dominica to brutalize and torture children on the pretext that we are bringing them up to be better adults.

If you believe we are exaggerating, we recently witnessed two incidents of violent child abuse in the middle of Roseau; a grown man was brutally beating a child continuously with a large leather belt on the veranda of his home, in the full view of the public, while the child howled in pain; and a few days later, also in Roseau, a woman was sadistically beating a young boy repeatedly on his legs with a metal hanger as the child screeched like a butchered pig.

Pedestrians and drivers walked and drove by and stared, enjoying the show. No one intervened.

Few persons have noted that while the media is being inundated with anti-child abuse messages, girls, and boys including toddlers are being canned, slapped, spanked, shaken, pinched, and generally brutalized by authoritative figures throughout the education system in Dominica. Education Minister Octavia Alfred, you know that, don't you?

And Ms. Alfred, we are sure you are aware that the United Nations Committee on the Rights of the Child defines corporal punishment as "any punishment in which physical force is used and intended to cause some degree of pain or discomfort, however light".

The UN has also determined that there's no excuse for the continuation of corporal punishment in schools and homes because it violates the human rights of the child under the UN Convention which ensures children are safeguarded against all forms of abuse and exploitation. In a study produced for the UN General Assembly, a committee has made it clear that "no violence against children is justifiable; all violence against children is preventable."

So, Madame minister, completely ban corporal punishment of all forms in all schools.

The case against the use of corporal punishment is straightforward: it damages children physically and emotionally. In extreme cases, the cuts and bruises and occasionally the disabilities are easily seen. In the majority of cases of child abuse, the emotional damage caused is much more difficult to measure but no less damaging to the well-being of the child. The scientific evidence published in the literature on the subject points to symptoms such as chronic depression and low self-esteem as well as psychological maladjustment at home and at school. Most importantly corporal punishment teaches a child lessons he never forgets: violence is the means by which conflict has to be resolved.

For decades now many people who are abhorred by persistent sex child abuse in Dominica have recommended to the government the institution of a sex offender registry, a system designed to allow government authorities to keep track of the activities of sex offenders, including those who have completed their criminal sentences. Sex offender registries exist in many English-speaking countries, including Australia, Canada, New Zealand, the United States, Trinidad and Tobago, Jamaica, South Africa, the United Kingdom, Israel, and the Republic of Ireland.

But these recommendations have been ignored.

In addition, there have been recommendations for moving the age of consent from 16 to 18 and breaking the silence surrounding the abominable act of sexual and other abuses. But the authorities will not hear; it looks like, according to Trinidadians, "stick break in their ears."