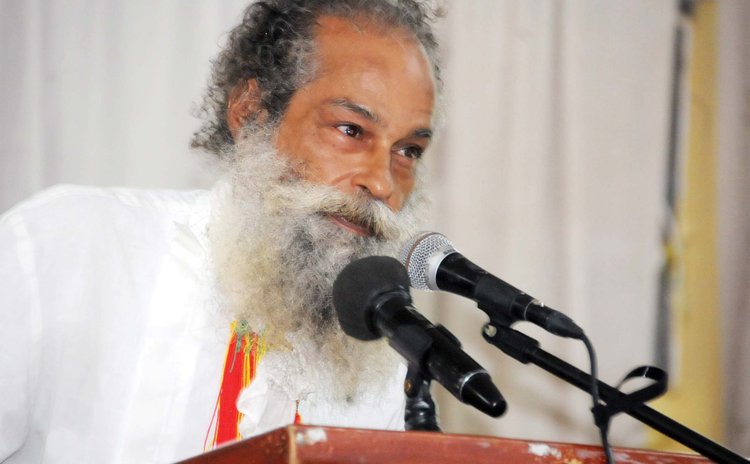 Henry Shillingford speaks at the WE conference

Long, all-over-the-place greying hair competes for attention with his foot-long beard; he wears a white long-sleeved shirt; and with his lively, darting eyes, lawyer Henry Shillingford is the epitome of a young boy's eccentric uncle who exudes wisdom but who does not suffer fools gladly.

"Amidst the celebration of the food, music and Creole culture, 'WE' presents another dimension- Dominica - 40 Years After, through the "Future of the Nature Island Conference"," Dr. Pascal said in a press statement. "WE' believes that the emphasis on 'sewo' during the 2018 reunion celebrations and the absence of intellectual balance/content create a void that the conference will fill".

The theme of the WE conference was "The Big Idea: Nature Island of the World in word and DEED."

"We are so special and my tiredness comes from how so many idiots in high positions just-don't-get-it," Shillingford said, the inflection in his voice rising, as he lamented the lack of appreciation for the natural attributes of the Nature Island.

"And there the Nature Island of the World has congealed to make the Bois Mange and to make the Gommier and to make the Layou," he said segueing from an image of the Milky Way to the earth seen from space and zooming in quickly to the 289 square mile island in the Caribbean archipelago. "This little island has the wonders of the world…the biggest boiling lake in the western hemisphere-Grand Canyon doh have one, Brazil doh have one."

The "Big Idea" of exploiting Dominica's natural attributes for its economic and social development by promoting the island as the "Nature Island of the World" was first suggested by environmentalist Bernard Wiltshire more than 17 years ago in his seminal "Ten Theses on the Development of Dominica."

In Thesis # 2: "The Nature Island of the World", Wiltshire argues that "a key strength for Dominica lies in the intensity and dominance of its natural environment which has a more powerful manifestation here than in any other place of comparable size, perhaps, anywhere in the world".

He continued: "Long ago, with imaginative foresight, our predecessors laid claim to, and secured acceptance for, the logo of "Nature Island of the Caribbean" for our homeland, a theme celebrated in virtually every line of our national anthem. But today we can be more ambitious. We should decide and declare that we are going to establish and, seek international recognition for this island as the Nature Island of the World and make that the overall objective of all our policies, the "holy grail" of our striving for development, the big idea governing our national effort".

Two other presenters at the WE conference were Albert "BO" Bannis and Mrs. Bannis who spoke on the topic: "Techno-politics of the Nature Island of the World."

There was also group sessions around the Nature Island of the World theme on agriculture, tourism, education, migration, political governance, health care and discussion on a "Formulae for a Return to Isle of Beauty, Isle of Splendor-Cleaning the Nature Isle".