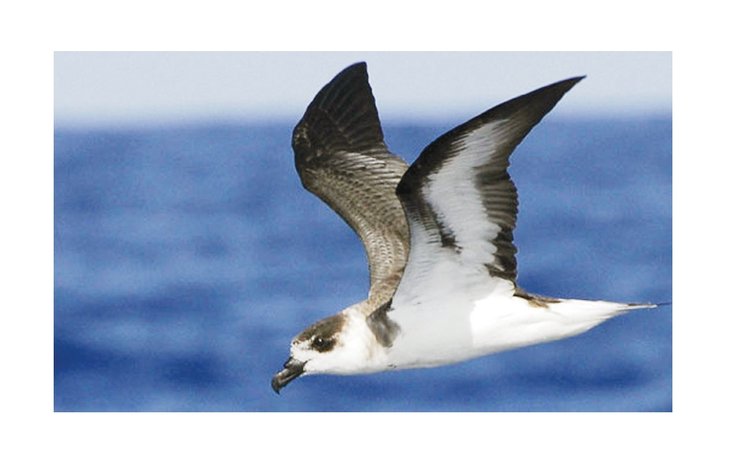 For the first time in over 150 years, the Black-capped Petrel, or Diablotin bird, has been seen flying over Dominica.

The Diablotin bird is intricately linked to Dominica's culture with two mountains bearing its name (Morne Diablotin and Morne Aux Diables) and being mentioned in several traditional songs.

This species was declared extinct, worldwide, in the 1930s; however, in the 1960s a population of petrels was discovered on Hispaniola.

In Dominica's case, a Diablotin bird was found near Peebles Park in 1932. After that, 2007 was the next time a bird was discovered. Over an eight-year span, from 2007 to 2015, four birds had been seen; however, they were either grounded (and died shortly thereafter) or dead upon discovery.

Earlier this month a team of researchers - Gérard Millischer, (from Parc National du Mercantour in France) and Yvan Satge (from Environmental Protection in the Caribbean, EPIC, and the South Carolina Cooperative Fish and Wildlife Research Unit at Clemson University) – wrapped up a visit to Dominica to conduct further research on the Black-capped Petrel.

In an interview with The Sun, Satge, confirmed the presence of a Diablotin bird, on the island.

"We were able to see one petrel flying away from Morne Macack, Morne Micotrin. That's a great discovery and we filmed it," Satge said.

The Black-capped Petrel is one of the world's rarest seabirds and the last record of it nesting in Dominica was in 1862.

A lot of preparatory work went into the research that led to this discovery.

"Starting in 2015, EPIC did radar surveys to estimate if there could be birds flying by, any bird, in this case, the Black-capped Petrel," Satge said.

Information gathered from this initial survey supported that theory which led to another step in the research process.

"In 2020 there was another round of radar and then this year there was a different type of technology, which was thermo binoculars, night vision binoculars," Satge said. The Diablotin bird currently falls in the endangered species category by the International Union for Conservation of Nature, IUCN.

The Forestry Division also spent years developing techniques and implementing technologies to help in the search for the nesting grounds of the Diablotin bird.

"In 2016 there was a technical exchange between Dominica and the Dominican Republic because there they had found nests from a study in 2011. And so they knew how to look for them," Satge said.

In addition to training in the Dominican Republic, Forestry Division personnel had placed sound recorders, acoustic recording units, in the forest that record any sound around them.

It is challenging to locate these birds on land because they are out at sea from July to November. Their flight pattern makes them difficult to spot as they fly at night. Additionally, their nests are underground burrows which are hard to identify. Dominica's mountainous terrain also adds to the difficulty in searching for the petrels' colonies.

This recorded film of the Diablotin bird flying over Dominica brings a new level of evidence that the species is using the island.

"This really confirms and brings the proof that Black-capped Petrels are using the island and present on the island. We knew already from dead birds that we found but it confirms they are here and they are active," Stage said.

The team of researchers and the Forestry Division have already mapped out their next move following this discovery.

"The next step is analyzing sound data, so audio recordings that Forestry staff would have collected from the devices placed in the mountain. Meanwhile, other staff members are going to go back and place more recorders to keep recording because the breeding season is just starting," Satge said.

Satge believes that in the near future a combination of different technological tools – radar, night vision, audio recorders, and other devices which may be developed – is key to locating the birds.

"One other tool in the toolbox is to catch some of those birds at sea and put a satellite tag and hopefully follow them to nesting areas", Satge said.