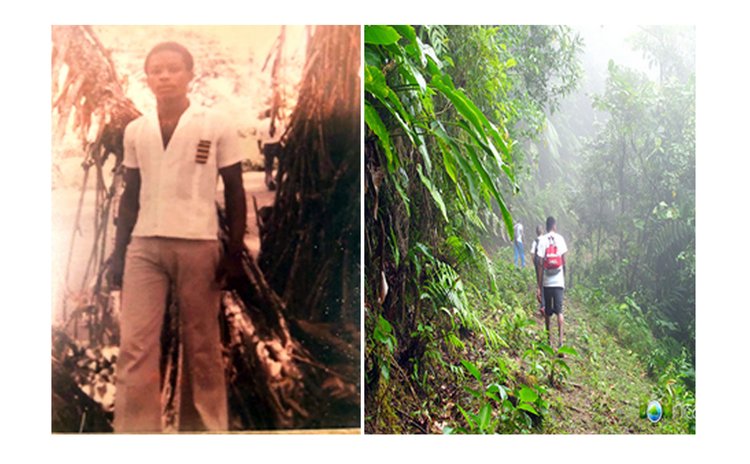 The Dominica Grammar School (DGS) for boys was established by the government in 1893, and in 1932 the Roman Catholic St. Mary's Academy opened its doors to Roman Catholic boys. Soon after, the Methodists started a secondary school for girls. Until the 1960s, the difficulty of motorable road access by road to the far rural areas and the continuing concentration of most services in the capital city of Roseau.

During the time and before the system prevented all but a selected few students living in the city from attending secondary school. These students either were of the Petite bourgeoisie- small-scale merchants and extracts from the land owing plutocracy and ordinary Roseau children. The rural children were for the most part excluded from acquiring higher education- they belonged to the peasantry and the fields. They were 'Enfant Mal –ea- way'.

It was only with the construction of roads and schools deep in the hinterland by Premier E. O LeBlanc that formal education became available to a very small number of children of the resident rural population. But the period during the early to mid-1960s also saw the emergence of a public road and educational system, especially on the primary level. Motorable roads reached my rural village of La Plaine, an agricultural village located in the south east 'Au Vent- the Windward coast' region in 1964.

Prior to the roads, 'Jea Au Vent' made the treacherous two-day trip to Roseau on foot carrying heavy baskets and knapsacks tracking through the Grand Fond mountain to Laudat then to town to sell their produce. This old trail- 'Chemin Letang' (Lake Road) connects the east coast to the capital Roseau and was for many years the main 'highway' across the island. Chemin Letang goes from Rosalie on the east coast to the Freshwater Lake, meeting up with the community of Laudat and continuing down valley to the capital.

A few years ago I hiked that journey and appreciated the pain and sacrifice that our bare-footed mountain people made to secure a meagre living for their families. The hike also gave me a deeper appreciation, realization and perspective of the true natural beauty and splendor of our island home- the rain forests, the fresh air, streams and lakes.

As I negotiated the steep valleys, jungle canopy and the mist and cool of the Trois Piton National Park, the spirits of the rain forests spoke to me loud and clear that 'we all' should make every effort to hang on to our sweet Dominica and try not to barter it to people from far away foreign capitals for pocket change in exchange for passports. The hike drove home the message that our island home is priceless and if we don't understand that it might be taken away from us.

My story out of the La Plaine valley began on a warm September morning on September Saturday, 3rd 1972. I said a very emotional good bye to my family, friends, the bucolic rolling hills and moonlight nights of my close–knit provincial southeastern agricultural community.

I jumped on the back my uncle's 3-ton banana truck and headed in a north-westerly direction traveling on the winding roads with hair-pin-turns through Pont Case and the Antrim Valley. My final destination was the 'bright lights' of Roseau and the greener pastures of the DGS and later the 'world'. My laser focus goal and mission in Roseau was to acquire a high school education.

In 1972 DGS became a co-ed high school with seventeen (17) girls entering the class after the term started sometime in October. The jury is in and the unanimous verdict is that those of us who made that daily trek to Valley Road on the banks of the Roseau River haven't disappointed DGS. Also DGS did not disappoint us more than four decades ago. Education is about transcendence and DGS has always led the way since its existence. In fact, in two years we are planning a class reunion to celebrate 50 years since the day back in 1972; the DGS 72:50 planning committee is hard at work at the moment.

DGS heads-of-school were highly respected and ran our school with passion, authority and full autonomy. They were serious professionals with a serious job of educating and transcending their young charges and preparing them for tomorrow and the world. Some trouble makers were punished without hesitation and often were suspended and a few were expelled. These men were fully in charge and one cannot learn in an undisciplined and chaotic environment. Our school (DGS) was a sanctuary for teachers, staff, students, proud parents and communities with high academic standings, discipline and learning as the order of the day.

The embroidered DGS crest which the head boy, prefects and class monitors proudly wore on the left breast pocket of the white shirt jacket uniform which has the school's motto inscribed at the bottom proudly hangs in my home office in Washington DC. I often tell my two teenage daughters the crest made all this possible. And for this I will be eternally grateful and thankful.

DGS' motto: Mens Sana in Corpore Sano, a famous Latin quotation, which translates, "A sound mind in a sound body", is never far away from my mind. Today I still sing the DGS song, 'When boyhood (youthful) days are over … fare fore to wider lore… living on the old school spirit… craftsmen and woman for ever more… DGS is and will always a School for 'Human Eyes'.