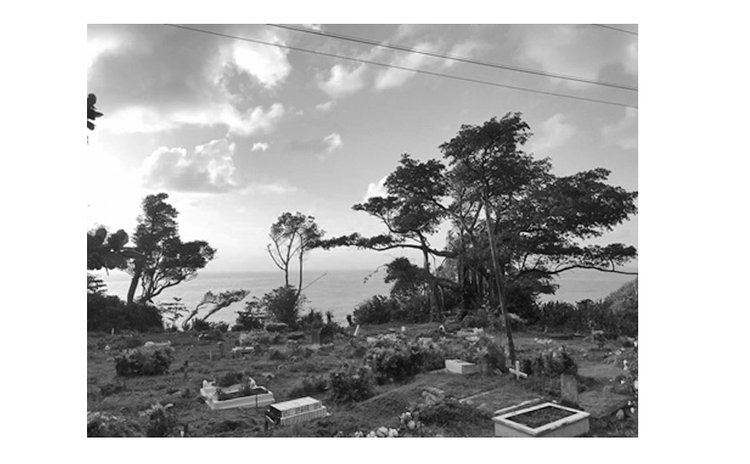 In March, 1971 in Mr. Vigilante's Standard 4 class at the La Plaine Primary School, he related a story which pointed out the manner with which the Windward Islands Broadcasting Service (WIBS) of Grenada radio announcers read death notices. Mr. Vigilante always listened religiously to WIBS on his small battery-powered transistor radio.

On a daily basis he would try to summarize the Dominica and sometimes the other Windward Islands' segments of the WIBS news and report to our class. His goal was to broaden our local, regional and global knowledge base far beyond our rural Southeastern outpost which was not on the nation's electric grid.

One morning Mr. Vigilante shared a joke about a young police officer who was stationed at La Plaine who also listened to WIBS daily. The officer was always confused after listening to the death announcements. The usual notice read, 'The deceased (he/she) lived to 'Morne De loss."

After much hesitation, the young office asked his Sergeant, 'But Sarge, where is Morne De loss?" I know Dominica has Morne Governeur, Morne Diablotin and the others, but I have never heard of Morne De loss." The old Sargent who was under the influence of a few spirited beverages, shouted and 'chewed' his young subordinate.

He accused him of lacking the necessary intellect as a member of the Royal Dominica Police Force representing the Queen (of England). After the Sergeant sobered a few hours later, he explained to the young man that it is not 'Morne De loss', but is 'Mourn the loss.'

Back then the death announcements were sincere, honest and authentic. Today the politicians have made them cheap, insincere and comical and a big joke on a very sensitive and painful matter. What's next for these modern day Robin Hood politicians who practice and exploit the politics of poverty, sorrow and emotional distress? Soon will they ask and coerce the dead before they 'depart' to write a very favorably and flattering political reviews on their behalf in their obituaries and death announcements for TV and online postings?

Will these politicians ask these people on their death beds to use their grand good byes to be used during after burial Happy Hour sessions declaring their favorite political leader and party for the next election? Maybe before the next general election we might see obituaries and death notices something of the likes, Mr. 'Whitney' would ask that in lieu of flowers, please do vote for or not to vote for political party X or Y.

And the family requests that instead of sending memorials, sympathy cards and well wishes and to 'Mr. Whitney' that you vote for politician X and party X. Or persons will only be allowed to attend Mr. 'Whitney's' burial church ceremony or/and attend the funeral procession to the cemetery only of you are wearing the full party colours. Please note that no excuses will be accepted nor any exceptions will be made.

Why can't the government enact a burial fund where all citizens get a funeral stipend depending on their income levels and needs assistance? Why do indigent families of the deceased have to come begging for assistance during this painful and stressful time to bury their love ones with dignity and respect?

I would just hope if these politicians are worth 2% of the salt in their bodies they should discourage these grieving families from including their names in their notices because they are not true friends. So what or who are these politicians? Are they benevolent public servants with real hearts or are they mercenaries of sorrow and opportunists taking advantage of families when they are most vulnerable? I can only imagine what answer the old (late) Sergeant would give his officer today. 'Sarge where is Morne De Loss?" "You mean Mourn the Loss?" Well, the shameless and narcissistic politicians have hijacked the death notices hook, line and sinker.