The destructive trail of Black Sigatoka 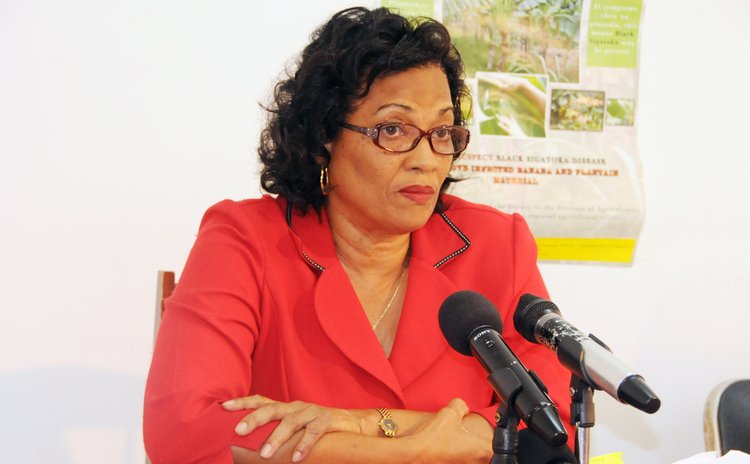 Black Sigatoka has been leaving its destructive trail across Dominica, bringing with it, many changes.

The island was subjected to the full brunt of the fungal disease, forcing many to abandon their fields or venture into new crops, according to Black Sigatoka Disease Management Programme (BSDMP) Coordinator, Carol Abraham.

Yields have decreased and fruit quality has been affected delivering a blow where it hurts most-- banana exports. Shipments to the United Kingdom have been crippled and only small quantities are being exported regionally.

National Fair Trade Organisation (NFTA) figures show a steady decline in banana exports to the UK from 2013 (the year after Black Stigatoka was officially declared to be present in Dominica) to 2015. In 2013 the NFTO shipped 80,190 boxes of bananas to the UK. However, this rapidly declined to 28,485 boxes in 2014.

In 2015, only 135 boxes were shipped before WINFRESH brought exports to a halt in January.

NFTA President Charles Watty reportedly told regional media that UK exports were halted because Winfresh was concerned about the quality of the fruit and because "Dominica does not have a proper management of the Black Sigatoka…" according to a Dominica News Online report.

However, Abraham reported a decline in the disease in recent times, attributing it to a combination of the dry weather and consistent spraying efforts on affected lands. The fungus requires wet conditions to flourish and dies in dry, hot weather.

The speed at which the fungus develops depends heavily on the weather and number of spores present. It is therefore imperative to take appropriate measures to decrease the presence of spores, Abraham stressed.

Abraham further explained that Black Sigatoka is airborne and easily spread by winds and humans, devastating banana and plantain crops because it attacks the leaves.

It causes premature ripening and extends the time between bunching and harvesting. Bananas are very thin and by the time they ripen, the insides are soggy.

While certain chemicals are effective in killing the fungus, Abraham said farmers need to engage in other practices for effective control.

The spread of the disease on a plant can be arrested during its first three stages with chemicals and if leaf surgery and de-leafing are done.

The first sign of Black Sigatoka is a small yellow speck on the underside of the leaf of a plant that appears healthy.

In the third stage, the streak gets longer, wider and dark brown in colour. When the disease approaches stage four, the streak appears on the underside as a brown spot and on the upper side as a dark brown or black spot.

At stage five, the spot would have acquired a dark brown or black ring border and a centre that is dry or turns clear grey. The spot is surrounded by a yellow halo. Other than wind and rain dispersal, spores can be spread when moving contaminated plants and plant parts and when dried banana leaves are used to cushion bananas being transported. Spores can also be transported on farmers' clothing and on tools.

Farmers are encouraged to dip their bananas into a recommended fungicide before transporting bananas in order to prevent the spread of spores. They should also clean tools, equipment, clothing and booths after use.

They are being urged to decrease humidity within fields by ensuring good drainage, weed control and correct planting density.

Chemicals are used to kill the disease, but have to be rotated since the fungus can become resistant.

Abraham said the BSDMP team, comprising the coordinator and three other officers, is conducting significant training across the island.

"We have had a lot of training island-wide. In some areas we get good turnout and in other areas, miserable turnout...we do PowerPoint [presentations], we answer questions…

"We have….monitoring officers who were originally with fair-trade and have a lot of banana experience….by the end of the day they have a lot of information to work with," she said.

But in some Northern and North-Eastern communities, such as in Marigot, the turnout to training sessions and the compliance with cultural practices have not been up to scratch.

Recently, Division of Agriculture Extension Officers were trained in Black Sigatoka management and Abraham said this will enhance their capacity to reach out to farmers. Abraham said the contractors who spray on behalf of the Programme, have also been trained and can advise farmers.

Spot checks are done by Fair Trade Monitoring Officers and weekly Cronshaw Readings are done to analyse the level of disease.

After the cutting was done, a follow-up visit was made to inject plants that had begun to re-grow. Abraham said there are plans to do this again this year, although not necessarily through the NEP.

Another aspect of management is to introduce resistant and/or robust varieties. Cardi has been working on Black Sigatoka resistant varieties, but the taste has not been in keeping with what the market requires, Abraham said.

Meantime, the Ministry of Agriculture and Banana Company Measures have planted six 'robust' varieties that are not easily infected by the fungus with a view to a resumption of large scale exports.

The success will be assessed when the plants have matured.