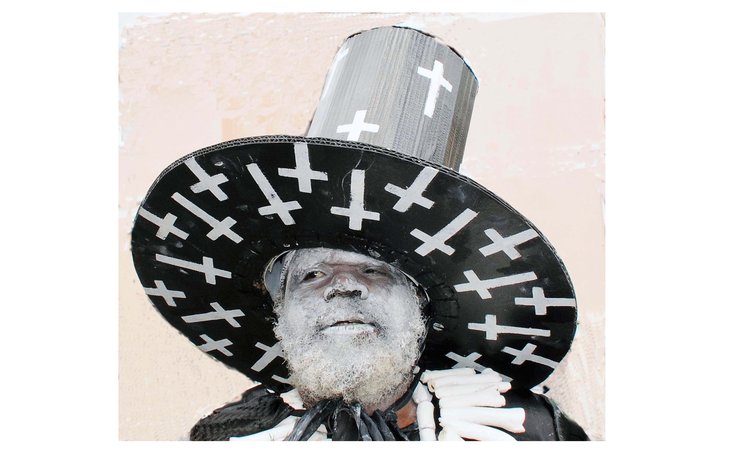 Born on February 24, 1957, Earl Darius Etienne, son of Sheila Rodney and Peter Maurice Etienne rose to become a formidable force, a beacon of light in contemporary, visual, and installation art industries. He was raised by his dad while his mum migrated to the UK. While living with his dad, he was cared for by 'Ma' Maria and later lived with his uncle the late Antoine J Etienne, his wife Bertilia, their 3 children: Dr. Carissa Etienne, Judy, and Althea, and two adopted sons Ackroyd and Dr. Gerard Birmingham.

After the Massacre Government School, Earl attended the St. Mary's Academy from September 1969 to June 1974. He had a passion for drawing and painting and was desirous of becoming an artist by profession. He painted for eleven years, prior to being awarded a fellowship by the Organization of American States (OAS) in 1982 to study fine art at the Edna Manley College of Visual and Performing Arts in Jamaica. There, he developed a unique technique called "bouzaille or flambeau" which created a smoke effect on canvas. He had an accident involving fire which inspired him to develop his own pioneering style of using the image formed by soot, applied directly from a flame. This was incorporated into his artistic work.

In 1986, after graduation, he returned to Dominica and took up a role at the Chronicle newspaper as a Graphic Artist, and an Art Teacher at local schools including the Dominica Grammar School. Later, he accepted a post as Cultural Officer in the Ministry of Culture while continuing to fulfill his passion for creating artwork. To exhibit his work, Earl opened an Art Gallery in Massacre called the Art Asylum, located downstairs of the old Massacre School below the St. Ann's Catholic Church. This was later expanded to several art galleries including Gallery #4, and various locations of the Art Asylum. His permanent art studio is at his home in Jimmit.

Earl was never afraid to experiment, invent, and reach beyond the norm and the ordinary. He is well-known for his ability to work with a variety of materials from canvas, wood, paper, fabric, jeans, recycled items, coconut gauze, banana leaves and latex, and more. His styles and genres of painting also varied. His works embody African, Indigenous, and Caribbean souls with his depictions of traditional dance, dancers, and carnival. His works are influenced by ancestral, spiritual, social, cultural, political, and physical elements of his Caribbean environment. The well-respected artist held the Kalinago people close to his heart and this too is reflected in some of his collections.

During his nearly 50-year-career, Earl D. Etienne collaborated with several artists and curators and displayed his artwork at several galleries including Aquarela Galleries, the Iris Dangleben Gallery at Caribana, the Frame Shop, and Everybody's Art Gallery. Additionally, he was invited to and participated in several solo and group art shows and festivals including Carifesta, Caribbean Fine Arts Fair, Domfesta, and Francophone Art Exhibitions. Earl exhibited his works in several countries including Dominica, Guadeloupe, Martinique, Antigua & Barbuda, St. Kitts & Nevis, Jamaica, Dominican Republic, St. Lucia, Barbados, Trinidad & Tobago, Senegal, the United Kingdom, Switzerland, Austria, France, the United States, and Canada. He mentored younger Dominican artists, collaborated with other artists to form an association, and create an awareness of the Dominican Art Industry. He became a spokesperson for the development, appreciation, and preservation of art and culture. Earl was a prolific producer of art and has won several art competitions.

Moreover, he received numerous awards and recognition for his contributions to the Arts and Culture. He fulfilled many roles such as Senior Cultural Officer, Artistic Coordinator of Events, Curator, Carnival Costume Designer, and Builder, Set Designer and Builder, Graphic and Art Consultant, and a founding member of various associations related to the preservation of historical and architectural heritage.

As an artist, Etienne grew from basic Caribbean landscape portrayals to highly sophisticated expressions and techniques. His pieces reflect history, lifestyle, people, culture, struggles, environmental degradation, and much more. For example, his portrayals of Hurricane Maria, capture the pain, turmoil, and destruction wrought by this powerful force of nature, but he also captured the regeneration that followed in its wake. He revealed a lot of his inner thoughts in his paintings which have left a legacy for the arts in Dominica. He believed in rising over mediocrity and worked arduously towards excellence. In his own words for the Caraifa Conference magazine, he stated: "My works are an expression of my experience in life. In the beginning, God created all things, therefore nothing is new under the sun, and thus nothing happens in a vacuum. Man is significant and is only on this journey to praise the Almighty, the greatest CREATOR. It is with humility that I extract from him and my fellow human beings to create my own visual world, using everything at my disposal. The integrity in One's work is to seek and to tell the truth."

Earl optimized his travel for work to visit and spend time with his many relatives and close friends in various countries. He loved to travel, explore museums, and attend festivals. In his pastime, he would assist children with art projects, homework assignments, and kite designs. He believed in community and youth development and supported several Godchildren. He was an avid carnival lover who would adorn sensays and carnival costumes frequently. In addition to creating artwork, he was a culinary master and cooked many delectable local dishes, particularly on Fridays and on weekend river picnics. He was extremely patriotic and expressed during many passionate discussions his devotion to the development of Dominica.

Earl Darius Etienne has gone to the great beyond, but his works, blessings, and the memory of his love will live within our hearts. He is mourned by many, especially his wife Nathalie (he was beloved nicknamed Mamo), daughters (Earlyn, Natasha, and Jenai), grandchildren, other relatives, and friends in the local and international art communities.

May he rest in the peace of our Maker and in the company of our ancestors.