The night Fidel dropped in

Bernard Wiltshire recalls his meetings with the Late Fidel Castro 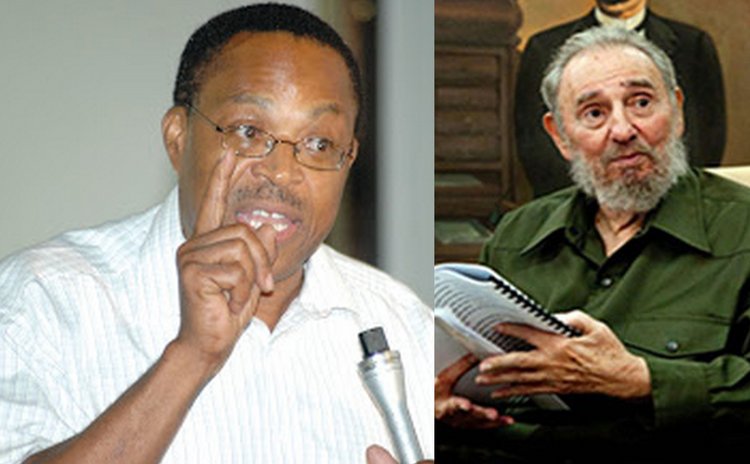 It was in September 1979. The Conference of Non-Aligned Countries had just closed in Havana. Hurricane David had just devastated Dominica. I was sent to Cuba by then Prime Minister of the Interim Government, O.J Seraphine or Perry, as those close to him called him where I met up with Rosie Douglas who had travelled privately to Cuba fresh from taking part in the political earthquake that had rocked Dominica a couple of months earlier when the people rose up against Patrick John government in a rare display of peoples power.

The Cold War was then at its height and Fidel Castro was the international Man of the Hour. In those days the Conference of Non-Aligned Countries was a big thing on the international political stage. The Americans were hell-bent on preventing the conference from taking place because they thought it was really aligned to the Soviet bloc in spite of its name. But they failed and in September 1979 a hundred and two heads of state and Government met in Havana with Fidel Castro as host in the chair.

I was sent by the Prime Minister to represent Dominica and to make a plea for help to the international community because no Government Minister at the time wanted to run the risk of being labeled as a communist by going to Cuba.

The Conference was a stunning success for Dominica. Fidel helped personally and Rosie and I formed one of the most powerful teams that Dominica has ever sent abroad to seek assistance. My mission was to get as much help for Dominica as possible. Rosie and I were of one mind on that. We succeeded beyond our wildest expectations. Nearly half an hour of the conference time was devoted to the plight of Dominica in a fund-raising session chaired by the then Guyanese President, Forbes Burnham. I remembered him pulling his ears now to the left, now to the right to hear which country was pledging money. It came by the millions; Kuwait, Sadam Hussain of Iraq, the United Arab Emirates, mostly Middle Eastern countries. Even Yasser Arafat pledged $10,000 on behalf of the Palestinians. In the end more than $13millions were raised for Dominica in the space of half an hour.

At the end of two weeks in Cuba we returned to Dominica. Fidel had personally intervened to offer 10 university scholarships. He ordered seven doctors to wait for me at the Havana Libre Hotel ready to fly out to Dominica. Cuba itself, in spite of its severe economic difficulties pledged $100,000 in cash. I negotiated these personally with Fidel. More significant still, the Non-Aligned Conference set up an international Committee of the Presidents of Guyana, Grenada, Surinam under the chairmanship of Jamaican PM Michael Manley to raise funds internationally to reconstruct the island's economy and infra-structure.

At the end of the Conference, Maurice Bishop agreed for Rosie and I to spend the last night in his delegation's hotel suite because we had to travel back home together the next day. With Maurice were his army chief Hudson, Ministers Selwyn Straughn and Unison Wightman.

And that is when it happened.

About midnight, Fidel dropped in to bid Maurice farewell. I had already gone to bed expecting to have to travel early the next day. An excited Rosie who had stayed up chatting with the Grenadians bust into the room.

I shooed him off, disbelieving, knowing there was nothing Rosie liked more than making practical jokes on his friends.

"Garcon, Let me sleep, Garcon, we have to get up early tomorrow".

But there was something in his voice that made me curious and I got dressed and went into the living room; and there was Fidel already deeply engaged with Maurice in what to me was one of the most incredible conversational interactions I have ever witnessed.

Fidel was dressed in his usual green guerilla fatigues complete with boots. He had a cigar in one hand on which he puffed from time to time, while with the other hand he jesticulated to emphasize this or that point. He appeared to me to be incredibly quick-witted with more than a whiff of what we call in Dominica "coquen". In his boots he appeared tall and slender and highly fit. You couldn't avoid noticing his delicate hands and slender artist's or pianist's fingers. He radiated an intense human warmth. There was an energy about him that swept one up irresistibly into the moment. Then his engaging conversation.

And there he sat with his boots on the table. I think Maurice had his feet on the table also. Fidel sat on one side of the settee and Maurice on the other with an interpreter between them. He did not hesitate to interrupt in English if he thought the interpreter did it quite convey his precise meaning. Fidel Castro and Maruice Bishop were in conversation and Rosie and I and our Grenadian comrades were privileged to eavesdrop upon it. I was well aware of the rich historicity of the occasion.

The conversation ranged over a wide field of global affairs. But the part that most grabbed my attention was the personal part. Fidel spoke of his childhood, of growing up on his father's farm and of his interaction with the workers; of his Catholic Jesuit education. He told of the earliest stirrings of his revolutionary outlook which sprang from his hatred of oppression and exploitation, which showed the depth of his love and human compassion. I have no doubt that those were the impulses that impelled him to action. Those who supported the oppression of the millions see only sinister results in his methods, but time and again it has been shown that Fidel enjoyed the overwhelming support of the majority of his fellow citizens for what has undoubtedly been one of the most complex and momentous social transformations ever attempted in any country; and that too, against a background of constant threats of violent intervention by the world's most powerful nation just 91 miles from Cuba's shores and its crippling economic embargo.

Fidel spoke of his first guerilla comrades, of Che, of the nearly disastrous attack on the Moncada, Batista's impregnable military fortress; of his capture, trial, imprisonment and exile in Mexico and of his epic battles in the Sierra Maestra and his heroic and triumphant march on Havana in January 1959.

Now it was Maurice's turn. The relationship between the two men was dynamic and affective. It was like that of a father and son. Maurice spoke also of his childhood, schooling and upbringing, of his father and of his death at the hands of Gairy's Tonton Macoute; of his involvement in movements to improve the lot of the people. One interesting parallel was his act of rashness in giving Gairy two weeks to vacate office. This was not unlike Fidel's rashness in attacking the Moncada. But rashness is only the other side of bravery, courage and defiance of death in the struggle for one's convictions. Many great men have had this moment of rashness in their long climb to ultimate success.

Rosie and I and the Grenadians sat on a settee right opposite the two great men. We were not shut out of the conversation. Rosie had an opportunity to broch the subject of helping Dominica with sugar and cement factories, and Fidel seemed able with a few shrewd questions to figure out roughly the size of sugar factory that would be required to meet Dominican consumption. Fidel and I had spoken before. I had already secured the scholarships and the doctors. He gave me one of his cigars which I kept for years. When I eventually smoked it I became more toodi than a drunkard.

About 5.00 a.m Fidel left as swiftly as he had come. We only had a short time to savour the moment before our official cars arrived to take us to the airport.