THE POLICE… On The Beat! 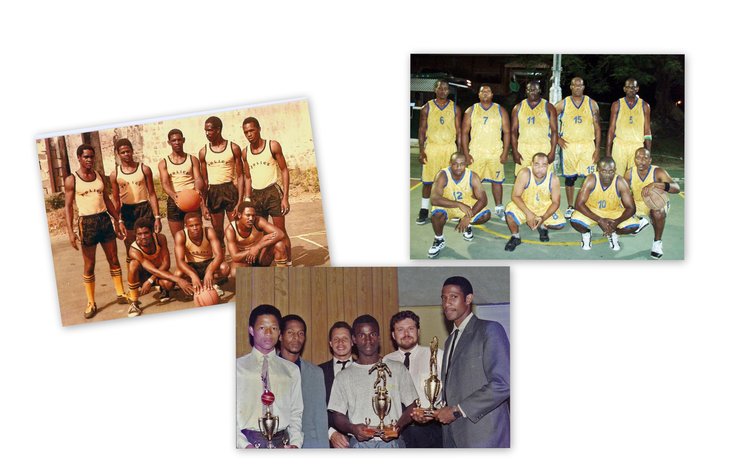 The year 1979 has gone down in Dominica's history as the year when big, bad Hurricane David dealt a near fatal blow to the Nature Isle. That was also the year that the Police Sports Club first fielded a team in the national basketball League. The team, which will sometimes be referred to simply as "Police" below, still appears on the rosters of the Dominica Amateur Basketball Association, although over there have been two gaps in their participation in the League.

Fielding a team for any game by the Police team can sometimes be a bit challenging as some of the officers come from "critical departments/units", while others are posted to out-district stations with limited manpower. Another of their greatest challenges as a team has been the lack of a proper training venue. However they have persevered against the odds for over three decades.

Playing originally in the colours of gold-and-black, and now gold-and-blue, the Police Sports Club uses basketball – and other sports - as an avenue for fostering greater Police-Community relations. And in order to achieve this they participate in the national basketball league, community leagues and in invitational matches in various villages. Also, over the years the team has included several "civilians" on their team-lists; Miguel Blanchard and Emanuel Loblack are two non-Policemen who were playing with Police in 2017.

The Police are currently the longest-serving basketball team in Dominica, even though their participation in the national league has not been fluent. They are also the only current team to have played in all three men's divisions in the national League.

Some years later they moved back down to the second men's level (Newspaper reports show that they played at that level in 1997, 1998 and 1999) and they took another leave of absence some time thereafter that extended to 2007. However, from 2008 the team has participated annually in the national league, firstly in the third level men's division, then back up to the second level for three seasons (2014-2016). In 2017 they got promoted again to the Premier Division.

Apart from competing in the national league, Police have also played in community "Off-Season" basketball leagues such as the Massacre League (2008, 2009) and the Roseau Valley League (2014). They also enjoyed playing invitational games, against teams at Soufriere, Grand Bay and Marigot.

The team also won awards for Best Dressed Team on Parade at the 1992 Season-Opener, and for Most Improved Team in Division I (2LMD) in 2008.

Over their many years participating in the national league Police has made their presence felt, blowing out their opponents on a number of occasions. They hit one of their highest game-scores when they defeated Comets 101-71 in the 1989 Division II (2LMD) league. More recently, they amassed 717 points (@ 71.7 ppg) in their 10 games in the 2015 basketball season (the most points in their Division), with Marlon Hilaire contributing 231 Pts and Kerry Christmas 172. In that same 2015 season, the team led their Division in Free-Throws (107), and Gary Benjamin sank 6 big "Threes" in a game. With their re-entry into Division I in 2014, the team won 25 and lost only 5 of their Regular Season games, including a 13-game winning streak in 2016.

The Police basketball team has won many League matches, but has also been defeated in several of their encounters. However, probably the most humiliating defeat that they suffered was when the team of lawmen surrendered to and was overpowered by a team of women, Pepiz Pioneers – "the first women's team in the history of basketball in Dominica" - while in Division III (lowest level division). This "incident" occurred in the early days of their participation in the national League.

But, as a matter of consolation, some current players on the team may wish to note that Pioneers – who first appeared on the basketball scene in 1977 - had also defeated another all-male team in that Division, viz. DGS, although they were handed some massive blow-outs by other teams, such as SMA Juniors, who had inflicted a 118-34 whipping on the ladies.

Moving away momentarily from the local scene, it must be noted that on three occasions the Police basketball team represented the Police Sports Club, the Commonwealth of Dominica Police Force and, by extension Dominica, in the Law Enforcement Officers Basketball Tournament held in the Bahamas in 2011, 2012 and 2013. Also participating in those tournaments were teams representing the Police Services of Antigua & Barbuda, Bahamas, Barbados, Canada, Jamaica and Trinidad & Tobago.

Many of us who play basketball do so for sheer fun, in spite of the sometimes tough competition. However, one of the saddest days – or nights – in the history of the Police Sports Club was when the basketball team lost one of its members, Johnny Daniel, who succumbed to the effects of a head injury sustained during a DABA League game in 1992; the team had begun playing in Division I (top level division) earlier that year. Johnny had been a regular top/high-scorer for his team, and was also one of the recipients of the Michael Jones Award for basketball, for netting the highest player-score in a Division II game for the 1990 season. The team and the League lost a great player who may have still been contributing to the game 26 years later, even though Johnny would have been at least in his late 40s in 2017.

The Police basketball team is currently captained by Marlon Hilaire; he succeeded Gary Benjamin who had led the team from 2008 to 2011. Their longest serving player is Garvin James who has been with the team for 25 years now, i.e. from 1992 – minus, of course, the team's second break in participation in the League. Garvin plays as a Forward and Guard. And, while Police Sports Club has not had a player on the Dominica national basketball team, Garvin was called up to the training squad on at least one occasion.

Over the years the Police team has been coached by lawmen and civilians alike. Their current coach – from 2011 - is P.C. Gary Benjamin who is a FIBA Certified Level II Coach, and also a player on that team from 2007. Retired Corporal Lynard Henderson, while on active duty with the Force, did a short stint with the clipboard, directing the team to win the 1991 Championship. Their civilian coaches thus far include Mickey Joseph, Emanuel "Lobie" Loblack, and Bernard Mills who also played with the team when they participated in the Law Officers Tournament in the Bahamas. Sgt. Nicholas Bruno has been the team's dedicated Manager for many, many years. Hats off to you Sir!

It may be interesting to note further that several Police Officers who played on the Police basketball team over the years went on to excel and gain some level of "prominence", either in policing in the Commonwealth of Dominica Police Service, or in other fields. Hobbs Jno. Baptiste, for example, subsequently became elevated to the rank of Deputy Commissioner of Police, while David Andrew and Ainsworth Irish both served in the position of Superintendent of Police. Bernard Pacquette subsequently became, and is currently, a sitting Magistrate, while Steve Williams sometimes entertains audiences as a Calypsonian under the stage name, "Triumph", or as a Cadence vocalist.

Jump Ball congratulates Police Sports Club on its re-entry into the Basketball Premier Division in 2017 and wishes the team all the best in its endeavours. Stand Easy!! But keep the balls bouncing and the baskets flowing!

Information contained in this article was obtained mainly from discussions with P.C. Gary Benjamin and retired Police Corporal Lynard Henderson.