The Private Sector Must Influence the Environment to Protect Wealth 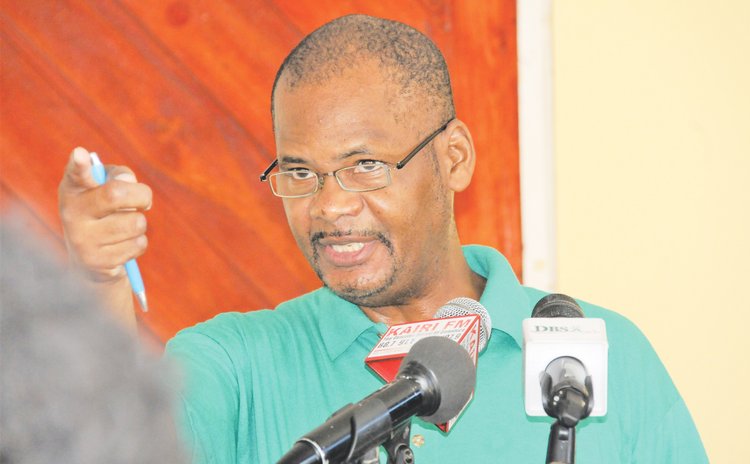 Outspoken Achile Joseph of the DEF at a meeting in 2018

The May 3, 2019 issue of The Chronicle published a thesis said to be authored by Anthony Astaphan, SC, in which said thesis sought to put forth a certain perspective on the ongoing debates regarding the broad subject of electoral reform in Dominica. The literary style of the thesis was substantially combative, and while it was sure good reading and contained a lot of truth and opportunities for reflection on many public utterances and written releases, it seem to have evaded the underlying raison d'être and disclosed intent of The Group of Church, Business, Trade Unions, and Civil Society, which was made to be a target of the thesis. The inclusion of the umbrella Dominica Business Forum in the grouping is no accident, no short-sightedness, no oversight, no under-sight, but a deliberate and calculated decision to employ a risk management strategy which hitherto was lacking in interventions to contain threats to business. Let me explain.

Tuesday February 7, 2017 is a date that will live in infamy in the hearts and minds of all loving Dominicans, more so private sector operatives who stood powerless as mobs of residents with pent-up feelings exhaled their frustration on properties housing retail businesses, and the contents thereof. The violence followed a meeting held by the opposition United Workers' Party in the vicinity of the Financial Centre on East Kennedy Avenue in Roseau. The meeting ended but the crowds seemed not to have experienced a gradual descent from the hype created by the several presentations touching the day-to-day lives and realities of Dominicans. Those presentations introduced little "breaking news", yet their content synced in with what I believe was (and still is) the perception among many that "inequality reigns supreme in Dominica", and that "the probability of realising ones developmental dreams in Dominica is substantially low." Put another way, it required very little to spark that crowd into destructive action. People came to the meeting already carrying several tons of personal anger and dissatisfaction with their lot in life. When the physical dust cleared the following morning, private enterprise sought to pick up the pieces. Political statements made in the wake of the disturbances showed either a growing ignorance among policy and law-makers of the realities of life on the ground, or a cover-up in order to hide the known causes, or both. Efforts by the Dominica Business Forum et al to bring political leaders to the table to discuss ways of stalling a recurrence of such destruction to business enterprise did not realise its goal because political leaders clung to their scapegoats.

September 18, 2017 a mere seven months following the social exhaling of the February 7 wrath, our society and economy were ravaged by a category 5 super storm in a manner synonymous with Alexander the Great destruction to the proud City of Tyre. The sacred scroll itself said of Tyre, "I will scrape the soil from her and make her a bare rock. She will become a place for the spreading of nets in the midst of the sea." In our case, the private sector was the enemy of choice, again, and subjected to waves-and-waves of looting and destruction to property to the extent that many private investments were reduced to "bare rocks." And even those bare rocks continued to take the brunt of destruction for several weeks thereafter. What did the private sector do or not do to Dominicans to deserve these treatments? Where did investors go wrong?

Several retrospective analyses will be undertaken to determine causes for the behaviour of "otherwise compliant residents" in the wake of February 7, and September 18, 2017. A full understanding of cause and effect continues to evade social investigators, but a re-look at Hurricane David in 1979 and TS Erika in 2015 transposed on the 2017 human destructions already positions some "likely" causes as "very likely."

In each of the four instances of looting and wanton destruction of business enterprise, the population was restless…substantially dissatisfied with economic and social issues. In each instance, major sub-groupings of residents were not happy with the administration of public affairs. This is not to say that another political party in governance would not face the same pressures from dissatisfied residents. This is saying that it has become a strongly-held belief among private sector operatives, leaders and representatives that in events of national restlessness, our people exhale on businesses.

As we approach rising political flexing in advance of general elections, the Dominica Business Forum sees the various calls for electoral reform as match sticks ready and willing to ignite at any time. Our people are already hyped, and with the perception of "election stealing" becoming reality for many who so confess, the business community sees its involvement in addressing public dissent and possible stalemates as sine qua non. For private enterprise, addressing and resolving calls for electoral reform is a critical part of risk management. Enterprise CANNOT sit back and allow dissent to rape and kill their investments. NOT AGAIN!

I will be very candid here: if the incumbent party is returned to lead Parliament, or if the main opposition party forms the government, there is every possibility for civil unrest. And who is going to be looted?

It is the responsibility of our political governors to address dissent with a view to diffusing agitation and ensuring public peace. It is also their responsibility to create and enhance the environment to do business. The involvement of the Dominica Business Forum in the grouping of civil society which is addressing a bubble-ready-to-burst should never be labelled as an attempt to influence the outcome of general elections. Businesses want a resolution of this election reform thing sooner rather than later, and before general elections. This is all about risk management and nothing else. It would indeed be very sad if after four beatings, enterprise has still not learnt a lesson.