JUMP BALL No. XX (Segment A) 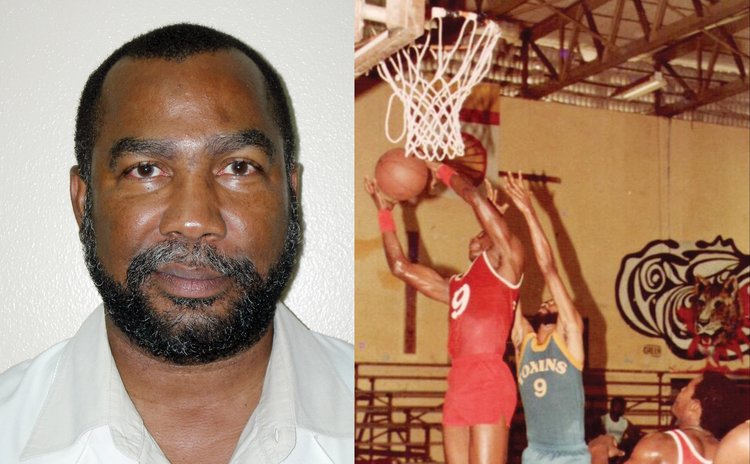 Many readers of the Jump Ball articles may be regular, annual viewers of NBA, March Madness and Final Four (US college) games on television. But, how many know that the game of basketball as we know it today was created by a Canadian medical doctor, Dr. James Naismith of Almonte, Ontario, who resided in the USA? The sport was invented in Springfield, Massachusetts, in December 1891, to condition young athletes during cold months.

Closer to home, during the glory days of basketball at the Windsor Park "Dr. Jay" was a household name around the court. But we are not referring to Julius Erving of the NBA. Instead we speak of Edward Prevost of Roseau who once played basketball with Wizards, then Flames, in the national league, and in Off-Season leagues.

That's the same Dr. Jay who officiated basketball games or "held the clock" on many occasions in the absence of referees or table officials assigned to do games. "Jay" also played the very important roles of grounds-man, equipment-man and storekeeper, facilitating the running of games in league competitions and regional tournaments at the Park for many years.

In 1976 we saw a football team named Basketball Doctors, made up entirely of basketballers from the National League compete in the Football League. This was reported again in "Basketball Doctors... Playing Football?", in the 20th February 2017 edition of Jump Ball.

Records will show that neither our Dr. Jay nor any member of the 1976 Basketball Doctors had earned a doctorate from any institution. However during the 51 years of Dominica's basketball league no less than 13 basketballers, including eleven from the senior Division, went on to earn doctorates, either in human medicine (9 MDs), philosophy (2 PhDs), veterinary medicine (1 DVM), or dentistry (1 BDS).

Among those doctors are a former national and Windward Islands basketball coach, former national players, a player who dominated in his community's league, 2 recent players and a referee in the national league, among others.

Please note that due to an oversight while preparing the Basketball Doctors… Playing Football? article Dr. Cecil Mathurine, Dr. Shane McIntyre and Dr. Joseph Williams were inadvertently overlooked and I offer my apologies. Furthermore, while Herbert Thomas was mentioned in that article he has not yet earned a doctorate. However, he will be included in this article.

Jump Ball now examines the 13 individuals on that "team" featuring the real doctors in Dominica's basketball, more specifically their individual contributions to local basketball and their particular professions. Note that all players "on the bench" are star-players in their own right.

The article will be published in 5 Segments, beginning with the current.

George earned the reputation of being a regular high scorer in the League, topping the scoring in 1977 and again in 1986; but he had a most unorthodox style of shooting.

Three of George's highest player-scores were 45 pts for Ambassadors, vs Rockers in 1978; 44 pts for Ambassadors, vs Harks that same year, and a 45 pts against the mighty Pros. In 1978 he was the 2nd highest individual scorer in the League, averaging 33.07 pts per game, just trailing Pros' Lambert Henderson (deceased) who had averaged 36.31 ppg.

George also participated in DABA Off-Season Leagues with Owls. And while in the Bahamas he played with Toxins, a team of medical doctors formed for Hospital Month in 1984.

Moving away from the floodlights, the ball and the whistles and taking up the stethoscope, according to the Website of the Eugene Dupuch Law School (EDLS) in the Bahamas, George Bruney earned a Bachelor of Medicine and Bachelor of Surgery (M.B.B.S.) degree in 1982 and a Doctor of Medicine (MD) degree in 1993 from the University of the West Indies.

Dr. Bruney served at the Princess Margaret Hospital in Dominica before moving to the Bahamas where he continued to practice.

The EDLS website also notes that George later obtained a Bachelor of Laws (LLB) degree from the University of Wolverhampton in the United Kingdom in 2000, and after attending the Eugene Dupuch Law School in the Bahamas, he received a Legal Education Certificate.

The EDLS Website notes further that George was called to the Bahamas Bar in 2003, and has also been serving as Course Director in Forensic Medicine at the Eugene Dupuch Law School since 2004.

George is a consultant with the Public Hospitals Authority (PHA) of the Bahamas and currently serves as Director of Pathology & Laboratory Medicine at the Princess Margaret Hospital in Nassau, Bahamas' capital.

Joseph then left the State to undertake 'Pre-Med' studies for three years (1967-1970) at the University of the West Indies in Mona, Jamaica. Subsequently he studied dentistry at the University of Bristol in the United Kingdom between 1970 and 1974. Upon completion, he served as a dentist with the Government of Dominica between 1974 and 1979 and also served on the Medical Board of the Princess Margaret Hospital.

Dr. Williams has been in private practice since 1979.

Segment B in next issue