JUMP BALL No. XX (Segment B) 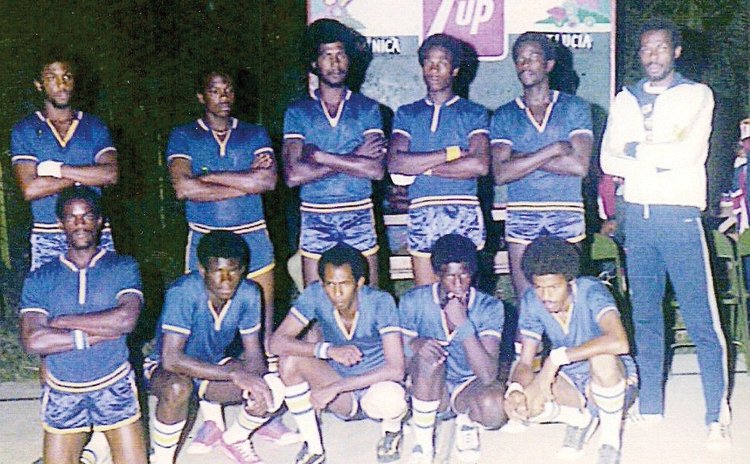 Members of the Dominica's National Team at 1st Windward Islands Basketball Tournament, 1975 (See story for complete caption of this photo)

Segment A of The Real Doctors in Dominica's Basketball featured George Bruney, MD; and Joseph Williams, BDS. The article continues with Segment B below:

GEORGE DANIEL, MD: George Daniel carries the accolade of being one of the first two Dominican basketballers who went on to become medical doctors. George, who was one of the pioneers of basketball in Dominica, played for four teams in the national league between 1966 and 1973.

George first played with St. Mary's Academy in the then single-Division national basketball league in 1966. Subsequently, he was a regular high-scorer on the Atoms team between 1967 and 1971. One year later (1972) he played with Roseau Concords, and his final season (1973) was with Electrons.

George was also a member of the Island (National) Team for several years, beginning in 1967. He later served as Coach of the Team in 1975, and that same year he coached the first and only Windward Islands Basketball Team for a post-tournament tour to Trinidad.

Moving from the basketball court and onto the field of medicine, George studied Medicine at Yale University School of Medicine in the United States, where he earned a Doctor of Medicine (MD) degree.

Later on, Dr. Daniel went on to pursue studies in Endocrinology and Infertility at the National Institutes of Health (NIH), and currently he serves as Chief Executive Officer (CEO) and President of Global Medical Health Centres and Resorts in Dominica.

ASHTON DELAUNEY, PhD, LLM: Ashton Delauney was quite passionate about basketball but, surprisingly, he never played for any registered basketball team in the national league. While attending Dominica Grammar School he was a "regular" on the Windsor Park hard court in the afternoons and even before classes, and would sometimes be playing under the moonlight and the stars on the DGS court.

"Chito", as Delauney was widely known, was reticent about getting into competitive basketball. However, according to George Bruney, a 'real basketball doctor' and Chito's former classmate, "This man could easily have been a superstar. But he expressly refused Hola's [Trevor Knight's] offer of a DGS uniform."

After graduating from DGS, and Sixth Form College (SIFOCOL) in 1977, Chito set off on what quickly blossomed into an extremely illustrious career path.

In 1981, Chito obtained a Bachelor of Science degree in Biochemistry from the University of Surrey in the United Kingdom, and in 1984 he earned a Doctor of Philosophy (PhD) degree in Molecular Biology from Durham University, also in the UK.

It may be of interest to note that while Chito was a PhD student he played basketball for one of the teams in a recreational league in Durham.

After three years of a post-doctoral fellowship at McGill University in Canada doing research in Molecular Biology, Dr. Delauney then returned to the Caribbean and took up a position as Lecturer, then Senior Lecturer, at the University of the West Indies in Barbados. And while at UWI he also conducted research, primarily in Biochemistry and Molecular Biology.

During his stint at UWI/Cave Hill, Chito seized the opportunity to pursue a Bachelor of Laws (LLB) degree, completing in 2000; and this precipitated a major change in career direction for him.

Chito then moved to New York in 2001 where he obtained a Master of Laws (LLM) degree from Columbia University in 2002. Now into the field of Law, Delauney first worked as an associate with two Intellectual Property Law firms in New York City, before moving in 2010 to a position as a Senior Patent Counsel at Bristol-Myers Squibb in New Jersey.

KENRICK "RICK" JAMES, MD: "Rick" – as Kenrick James is more affectionately known – has played basketball in the Premier Division of the national league for four teams, over a 10-season period.

He first played with Warriors of Marigot (2006-2009), then Marigot Sonics from 2010 for a couple of seasons until they bowed out of the League. He then "crossed the court" and went to play with Raptors from Wesley around 2012, following which he moved back to Warriors in 2014. Most recently (2015) he played with Prowlers from Trafalgar. He usually plays in the Power Forward position.

Prior to entering the national league, Rick was a member of St. Andrew's High School's basketball team in the Sports Division Schools League. He also played with Dominica's Basketball Team in the Annual Windward Islands "Inter-Schools" Games for three years (2004-2006). Furthermore, while a student in Cuba, James played on the International Sports School team in a League in Havana, Cuba from 2006-2011.

Away from the ball, the whistle and the numbered uniform, Rick pursued a Doctor of Medicine degree in General Medicine at All Saints University School of Medicine in Dominica, from 2013-2017. Currently Dr. James is into General Practice.

It should be noted that from 2006-2012, prior to studying medicine here, Rick had pursued studies in Physical Culture & Sports Science with emphasis on Sports Rehabilitation, at the International School for Physical Education & Sports in Cuba where he earned his Bachelor of Science degree.

Segment C in next issue