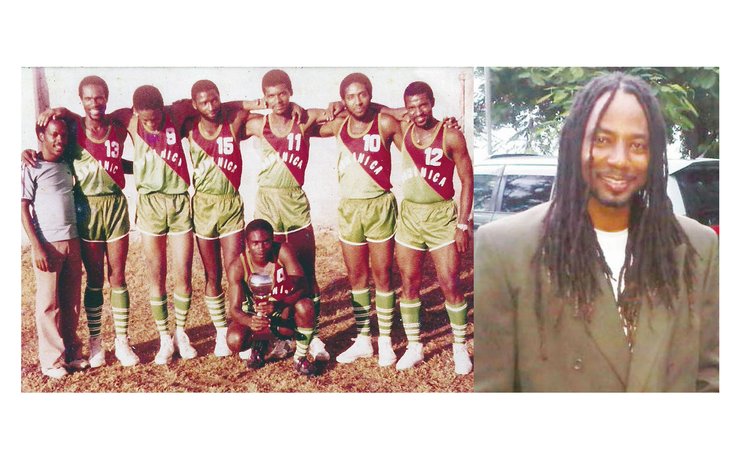 Vernon Dechausay first played basketball in the national league with Stormers in Division III (Junior Division). Soon after he was drafted by Clouds Division I, another team from Goodwill.

Vernon twice represented Dominica in basketball at the Windward Islands "Inter-Schools" Games and actually captained the team in one of the tournaments.

While with Clouds and only in Form I at the Dominica Grammar School Vernon got called up for selection to the senior national basketball team. He was unsuccessful in making the team and left the island shortly afterwards to pursue studies overseas.

Vernon began his studies at Besançon-Paris, France University in 1996, and later moved over to the Universidad de Sancti Spiritus in Cuba where he pursued a Bachelor of Science degree in Medicine, graduating with Honours, and going on to earn his Doctor of Medicine degree in 2003.

Dr. Dechausay subsequently became registered as a Medical Officer with the Government of Dominica in 2004, following which he served as District Medical Officer at the Reginald Armour Hospital in Portsmouth.

Adrien subsequently pursued post-Doctoral training in Traumatology & Orthopaedic Surgery between 2012 and 2016, and also graduated with Honours. Currently he is a Consultant Orthopaedic Surgeon at Princess Margaret Hospital, a position he has held since 2016.

It may be of interest to note that while studying in Cuba, Vernon was a member of the Universidad de Sancti Spiritus basketball team. And, although he no longer plays League basketball here, he is currently a regular and tough player on the court in afternoon pick-up games.

Irving McIntyre first played basketball in the national league with SIFOCOL (Sixth Form College) and Green City in Division II in the late 1970s, and assisted Green City in winning the League Championship in 1978.

In 1979 Irving got drafted by Cardinals into Division I, and remained with that team for several years. He was well-known for his powerful and effective inside play under the boards, and was also a member of Dominica's National Team for three years (1983-1985).

Upon completing his studies overseas, Irving returned to the national league, playing with Pioneers in the second level men's Division where he was a regular high-scorer for his team. In 1997, for example, he netted 21 points vs Cardinals II and sank 16 pts vs Venoms of Scott's Head. In Pioneers' final year, i.e. 1998, two of his biggest scores were 21 pts vs Cardinals II and 20 vs Police.

Irving also played with Fond Canie Rebels in Trafalgar's League in 1997, and had big scores of 24 vs Bullets and 22 vs Upper Village. He also coached Rebels.

Moving into the field of medicine, Irving earned his Doctor of Medicine (MD) degree from the Indira Ghandi Medical College in Shimla, in the State of Himacchal Pradesh, India in 1996.

Dr. McIntyre is a Family Practitioner and is currently into private practice on Dominica.

Jonathan Prevost, cousin of Garth Joseph (NBA), first played basketball in the national League for St. Mary's Academy, and upon graduating from SMA he joined Harks.

It is interesting to note that in the late 1970s "Trouble", as Prevost is popularly known by his friends, was approached by Cardinals to join that record-setting team, to play in the Centre position. However due to some "long-standing childhood relationships" with two stalwarts on Harks, he chose to join a team that was "closer to home".

A national sprinter in his youth, "Trouble" was also an active member of the Anti-Peristalsis Movers, a hiking group of basketballers who hiked Dominica's nature trails (e.g. Boiling Lake, Boeri Lake, Middleham Falls, Morne Anglais, etc), in the late 1970s and early 1980s.

Prevost later left Dominica to pursue medical studies at the Instituto Superior de Ciencias Medicas de la Habana (Institute of Medical Sciences of Havana) in Cuba, and is one of the first Dominican doctors who were trained in Cuba.

Dr. Prevost subsequently did his internship in Jamaica before returning to Dominica where he served as a General Practitioner in the early 1990s. He also had his private practice before migrating to the USA.

Up in the land where Basketball was invented, Dr. Prevost first became attached to the Bronx-Lebanon Hospital where, for several years, he worked in the Infectious Diseases Department, focusing on drug resistance in HIV/AIDS.

Dr. Prevost subsequently moved to the Montefiore Medical Centre/Albert Einstein University Hospital in the Bronx, New York, then away from the hospital setting to continue work within the Private Sector's Clinical Research Organizations (CROs).

It is interesting to note further that before migrating to the USA, Dr. Jonathan Prevost contested the 1995 General Elections, but was unsuccessful at the polls.

Segment D in next issue