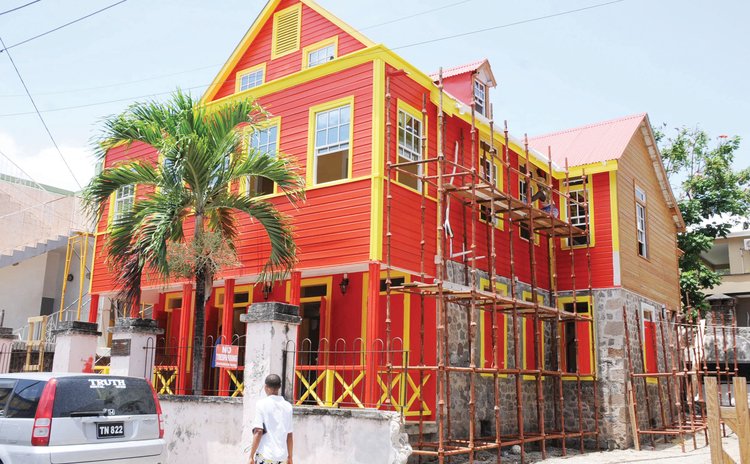 The red is as bright as blood red; the yellow sparkles like fresh gold; the view is commanding, the location smack in the middle of King George V Street, Roseau, near J. Astaphan's supermarket. A tall palm tree stands guard at the front, its arms waving.

"This is a lovely `building, isn't it," said an elderly woman, apparently a returning Dominica from England.

The Dominica Labour Party (DLP) will soon be the first political party in Dominica to own prime real estate in the city of Roseau. The party is now gearing up for the official opening of the building known as Lot 62 containing 4,703.8 square feet and formerly owned by the late Karol Winski and Sir Andrel Laville, also deceased. That property was purchased in 2017.

A SUN investigation in 2017 revealed that the property had been up for sale for about five years, since July 2012. A valuation of the property by Eric P. James, managing director of QSC Ltd, estimated the market value of the property at EC$1,737,800 which included a residual value of EC$91,500 for the building. The building, a two-floor structure, consists of an attic and an overall floor area of 3,161 square feet. The main floor (ground floor) is divided into four spaces while the first floor is made up of five spaces plus bathroom area. The attic is open.

Attorney-at -law Duncan Stowe confirmed that he was involved in the transaction. However, he refused to provide details claiming that he was bound by the principle of "lawyer client relationships".

Stowe, however, confirmed that the DLP had in fact purchased the property but again he said that, "this is a lawyer-client relationship and that (aspects of the transactions) was not for the public."

"The DLP has paid for the property but they cannot get the title since a caveat has been slapped on it. As you can see we are almost ready to open. We have spent thousands of dollars to renovate it to bring it to what it is now," one source said.

Asked about the date of the official opening he replied: "I don't know yet…soon, very soon, but I have no date."

The Sun was also told that Curtis "Joey" Lloyd's real estate firm may have also been responsible for the sale of the property and Lloyd is now seeking his commission which had not been paid; he has since slapped a caveat on the title.

"All I can say is that I have placed a caveat on the property, someone has to pay me and that is all I will say on the matter for now," Lloyd said.

He also stated that he was having a discussion with "the big man".

Edward Registe, the General Secretary of the DLP, said no decision has been made as to the opening date.

"As I always say, speak to the leader of the party. The building is so far beautiful. It's nice, I like to see it. But no decision has been made yet as to the opening; work is still happening," Registe said.