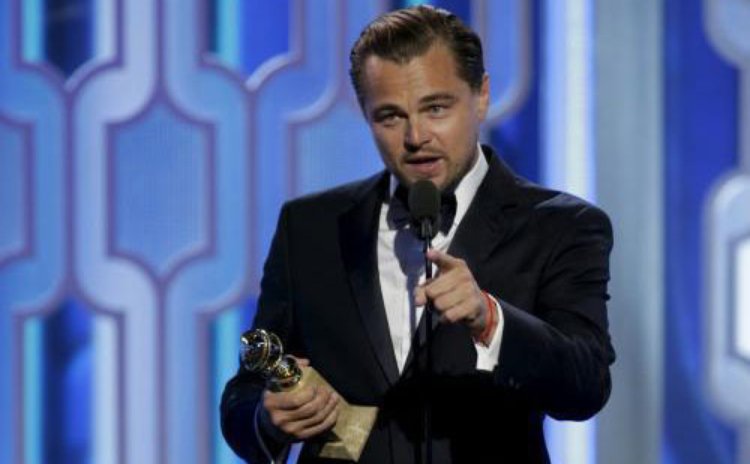 Leonardo DiCaprio with trophy award for Best Actor in a Motion Picture - Drama for performance in movie "The Revenant" at the 73rd Golden Globe Awards in Los Angeles, Jan. 10, 2016. (Source: Chinanews

"The Revenant", which tells the story of a frontiersman named Hugh Glass who was left for dead by others following a brutal bear attack in the 1820s, won best drama film, best actor for Leonardo DiCaprio and best director for Alejandro Inarritu.

The film was shot in brutal weather using only natural light. While "The Revenant" was made under constantly challenging circumstances, the result was worth the struggle, Inarritu said, whose movie "Birdman" won four Oscars last year, including best picture and best director.

"Every film is so difficult to make. But I have to tell (you) in my experience this was the most difficult journey," the director said.

"Thank you for allowing me to be a part of this journey with you," DiCaprio said. "I've never had an experience like this in my entire life."

Scott had never won a Golden Globe award before, despite being nominated for best director three times -- including this year. His previous nominations were for "American Gangster" and "Gladiator."

Damon was named best actor in a comedy film for his role in the film "The Martian" as an astronaut stranded on Mars. It was his first Golden Globe since 1998, when he shared a screenwriting prize with Ben Affleck for "Good Will Hunting."

Brie Larson was named best actress in a drama for her work in "Room."

Jennifer Lawrence, meanwhile, was named best actress in a comedy for her role in "Joy," a film based on the story of entrepreneur Joy Mangano.

This year's award was the third for Lawrence, who previously won best actress for "Silver Linings Playbook" and best supporting actress for "American Hustle."

Sylvester Stallone won the best supporting actor, his first Golden Globe award, for his role of Philadelphia boxer Rocky Balboa in "Creed." He was nominated for best actor and screenplay for the original "Rocky" in 1977.

Actor Denzel Washington was honored with the 2016 Cecil B. DeMille Award, which honors a person who has made a substantial impact on the entertainment industry.

On the television side of the awards, the Amazon streaming series "Mozart in the Jungle" was named the best comedy series.

"Mr. Robot" was the winner for best drama series. The prize for best TV movie or limited series went to the fictional historic miniseries "Wolf Hall."