The story of a Diablotin found at Padu, 2007 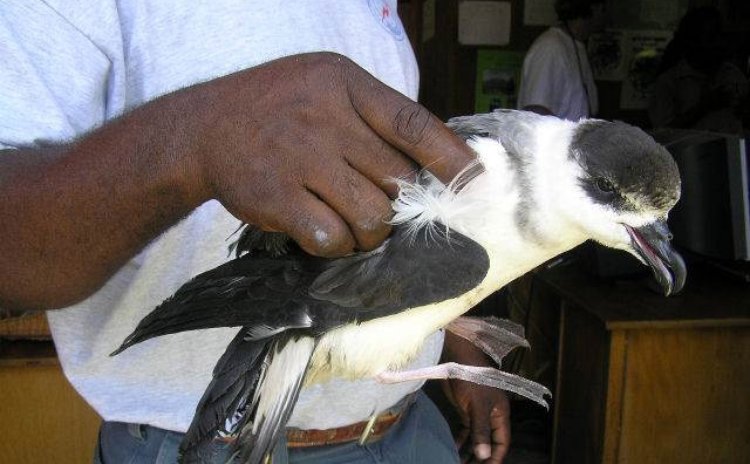 Although Dominica is a relatively small island, we currently boast two iconic species of wildlife. Our Mountain Chicken features on our country's coat-of-arms and on the logos of the National Bank of Dominica and the Dominica State College. The Sisserou Parrot, the largest of the Amazon parrots, is even more iconic, featuring more prominently on our national flag, coat-of-arms, and the badge of the Dominica Cadet Corps. The Sisserou Singers is named after that parrot, the country's second highest award is named after this bird, and this species also inspires a wide variety of craft work.

Several other local birds lend their names to places such as Morne Fregad (after the Magnificent Frigatebird), Morne Crabier, Morne Rammier, Petit Coulibri Estate, Grand Coulibri, and Pointe Touterelle. And probably the most majestic of all of our natural features, Morne Diablotin – the tallest peak in the OECS – was named after the Diablotin bird a.k.a. Black-capped Petrel.

At one time, Dominica had a healthy population of Diablotin birds, but for several years the bird was thought to have been "extinct" from the island. No one had seen a Diablotin for six decades, until a bird was found one Monday morning near Peebles Park on 2nd May 1932. That bird was then cared for in captivity, but died twenty-four days later. The next positive sighting of a Diablotin on Dominica was almost seventy-five years to the month after the 1932 sighting, when a bird was found in Trafalgar. The story of that bird follows

It was the morning of Monday 14th May 2007, and Vincent Theophile, an employee of the local electricity company DOMLEC, left the company's Head Office to undertake a work-related assignment at the Padu Power Station, at the entrance to the village of Trafalgar. Interestingly, DOMLEC's Office is located near the site where the Diablotin was collected in 1932. On entering Padu, Vincent saw this strange-looking bird "walking like a duck" on the edge of the road.

Shortly after, Vincent collected the bird, took a good look at it, and realised that he had never seen such a creature before. He then put it in a cardboard box, which he placed at the back of his pick-up truck and proceeded to undertake the assignment that he had come to perform.

Upon completion of his task some time past mid-day, Theophile proceeded to return to Roseau and, en route to his office, stopped off at the Botanic Gardens to bring in the bird (still in the cardboard box at the back of the pick-up) to the Forestry & Wildlife Division, and arrived there during the lunch hour. Asst. Forest Officer Stephen Durand, then Forest Trainee Nigel Harve and the under-signed were present when Theophile came into the office carrying the box. Upon examining the contents of the box, we too noted that none of us had ever seen such a bird before.

Stephen then proceeded to check a bird book, while I took a few photographs of the bird, which was held by Vincent. We subsequently thanked Vincent, and kept the bird in the box in a cool location in the office. Later that afternoon, Stephen emailed the photographs to Dr. Adam Brown of EPIC and Dr. Paul Reillo of RSCF, requesting assistance in identifying the species.

About 7:15 p.m. or thereabout, I returned to the office to do some paper work and met Stephen at his desk, also doing paper work. We checked the bird and it was still alive, as we had heard movements in the box. However, about an hour later, when we again checked in the box, we found that the bird had died. The dead bird was subsequently placed in a freezer.

The next day, Stephen received responses to his emails: What Mr Theophile had collected was in fact a Black-capped Petrel (i.e. a Diablotin bird)! Unfortunately, the Division overlooked issuing a Media Release. However, by coincidence, the bird was found during Dominica's observance of the Caribbean Endemic Birds Festival (CEBF), and its "discovery" and subsequent identification were first reported in the Division's 2007 CEBF Report, which was submitted to the Society for the Conservation and Study of Caribbean Birds (SCSCB); that organisation has since been renamed BirdsCaribbean.

The carcass of the 2007 Diablotin remained "on ice" for 33 months until petrel specialist Dr. David Wingate, who had accompanied members of EPIC to Dominica in February 2010 to collect information and data for the production of a "Seabird Breeding Atlas of the Lesser Antilles", examined the carcass with his team in preparation for preserving the bird, and found that it was actually a female with a brood patch, i.e. it had been sitting on eggs around the time it unfortunately ended up at Padu.

Dr. Wingate and his team success-fully prepared a "skin" of the bird. SignMan provided the Forestry & Wildlife Division with a quantity of plexi-glass which was used to construct a display case for the specimen, which was first displayed to the public at the 2010 CEBF Public Presentation event, which was held at the University of the West Indies Open Campus. The preserved specimen/skin has since been put on display at the Division's Visitor Information Centre at the Botanic Gardens in Roseau.

Now, a few weeks after the preparation of the Diablotin skin – and probably even before the display case was constructed – the Division decided to make a token presentation to the man who had collected the bird, for his very important and historic gesture of taking the bird down to the Forestry & Wildlife Division. But it turned out that on 14th May 2007, neither Stephen nor I had taken note of Vincent's name, and although his hand was in the photos holding the bird, we focused on the bird and so his face was not in any of the photographs. Subsequently, after a failed first attempt to get in touch with him, with the assistance of another staff member of DOMLEC contact was made with Vincent, who was then invited to attend the 2010 CEBF Public Presentation, where he was presented with the token award comprising of a plaque and a copy of the Dominica's Birds book.