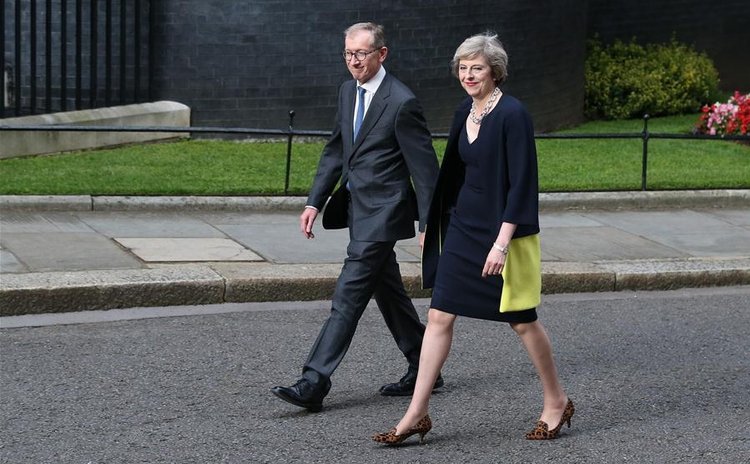 Her audience with the Queen at the palace came just minutes after outgoing prime minister David Cameron arrived at the palace to tender his resignation to the British monarch.

Cameron arrived at the palace in a police-escorted convoy with his wife Samantha and their children. After Cameron's final private audience with the Queen, the monarch said her farewell, again in private, to Cameron's family.

A large crowd gathered at the gates of the palace to watch the transition of power from one prime minister to his successor. May arrived at the palace with her husband Philip for her private audience with Queen Elizabeth II just minutes after the Camerons left.

As soon as Cameron departed from the palace a spokesman for the Queen issued a formal statement stating that the monarch had "graciously accepted the resignation of the prime minister."

Cameron announced his resignation on June 24, just hours after the Britons voted by a 52-48 majority to leave the European Union.

He had intended to carry on at 10 Downing Street until September to enable time for Conservative Party members to vote for his successor. But after the only other candidate for the job, Energy Minister Andrea Leadsom, dropped out of the contest, it left May as the sole candidate, leading to a swift transition.

Earlier Wednesday Cameron performed his final official duty at Prime Minister's Question Time in the House of Commons, earning warm praise from all sides of the house, including from his main adversary, Jeremy Corbyn, leader of main opposition Labour Party.

After the audience at the palace May headed to 10 Downing Street to start the task of choosing her new front bench, with her first appointments expected Wednesday night and Thursday.