They saw more than they have ever seen 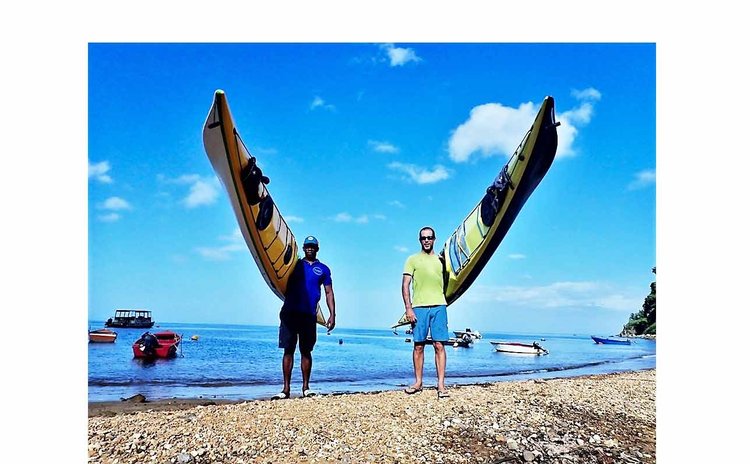 Sitting in their Kayak at 5 a.m., basking in the majestic beauty which the immense hills possessed, the thought on Weston Moses and Kerry Alleyne's minds were "are we really going to paddle around these big mountains?"

Two weeks ago, the friends and business partners paddled off Soufriere's waters as they had many times before. This time, however, they were about to set off on perhaps their most audacious project yet.

A bit daunted, the determined duo knew that such a feat was a feather in every kayaker's cap, therefore, they were up for the challenge which would eventually set them to become the first people in modern history to circumnavigate Dominica in single sea touring kayaks in just four days.

Each day, the two men set out before dawn to escape the worst of the day's heat and elude dehydration. A previous attempt taught Moses and Alleyne that they needed to do more than store tons of water, hence they took along all of the needed equipment including enough gear to camp out the entire week if there were no accommodations available.

Their friends in Soufriere also kept an eye on them online at intervals thanks to their GPS satellite trackers.

But how does one suddenly wake up and decide to explore the island via sea?

Well, according to Moses, who has lived and kayaked in Jamaica and St Lucia and now resides in Dominica, circumnavigating an island has always been a dream of his which he just wasn't able to complete in the past.

The kayaker also informed the Sun that his biggest crossing before this was a paddle from St. Lucia, to Martinique across the channel.

By the end of days one and two of their journey around Dominica, the certified guides had encountered an abundance of marine life in the form of one massive turtle, what appeared as a gliding shark's fin, and an incredible pod of jumping dolphins.

Rounding the northern end of the island, paddling into the Guadeloupe channel, Alleyne informed the Sun that with the combination of rough seas as well as strong winds, day three 'behind God's back' proved to be their most difficult day.

"At this point, we experienced all different types of water activity, ranging from, just normal waves, to surges in addition with the strong current posed many challenges in the water element," he recalled. "Additionally, on occasions, we would also have to deal with the wind, because the gusts in the Atlantic are a lot stronger...it seems to be one of the most treacherous places and which means that it certainly isn't for the faint-hearted. " On the final day of their journey, they had to launch from Rosalie Bay which still had rough surf. Their start was later than usual to get a good visual on the bay which meant for a hotter day on the sea.

Through the surf, Moses and Alleyne paddled friendly ocean currents and enjoyed a slight breeze back to Soufriere. On the shore, friends greeted them with animated cheers.

In all, the two courageous men covered a whopping 34 km in 6 hours and 38 minutes on day four.

The two acknowledge that without the expertise they each brought, none of this would have been possible, thus making them the perfect duo.

"Wes was the ideal person because he came here with a passion for kayaking watersports, in general. And we just pretty much had this proper chemistry. And people thought we were crazy, honestly, because we were just going out in the water on this little boat, but together we were able to get this done," Alleyne told the Sun.

The same thrill was also echoed by Moses who says that without his comrade, he would have never dared to embark on this journey.

They are hoping that their accomplishment will inspire people to get out on the sea to try something different while pushing their boundaries.

Offering a piece of advice to the inexperienced kayakers, who would love to follow their path, Mosses cautioned that they should never kayak alone and should practice as much as possible before attempting what they did.

In early November, the duo plans to launch the Soufriere Outdoor Centre on the Soufriere Bayfront, focusing on sea kayaking in Dominica, primarily targeted at locals. The pair also plans to build a local community of paddling which tourists can join.

Alleyne is adamant that anyone, regardless of age or gender, can learn sea kayaking and with the proper investment, the sport can generate more revenue for the country.

"I would say that Dominica has the potential to bring any type of water sport to the island. There are so many lovely beaches where the waterfall cascades on the beach and not everyone will get to witness that because the location is not easy to get to on foot, but with this kayaking business, we see an opportunity for people to go farther than they have ever been and see more than they have ever seen," he said.

The experienced adventurers both have intentions of circumnavigating other Caribbean islands in the not-so-distant future.