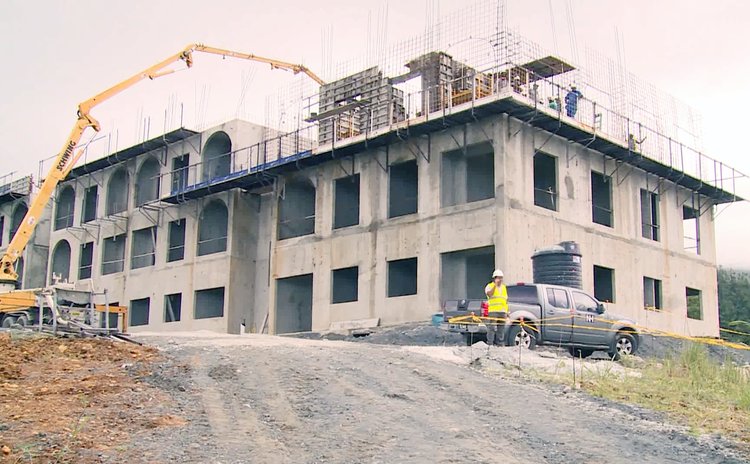 Thirty-three families in Grand Fond will be entering their new apartments by the end of June this year.

This is all part of Government's quest to construct 5,000 resilient homes for citizens.

Prime Minister Roosevelt Skerrit along with cabinet and the Dominica Labour Party hopeful for the Grand Fond constituency, Gretta Roberts, visited the housing development in that constituency.

A total of 66 apartments will be constructed in that community.

"In total, we will have 66 units, this one and a site opposite to the primary school which is currently at the foundation stage. And we are hoping that by the end of this year, that site will also be completed making way for some 33 more residences in Grand Fond," PM Skerrit stated.

PM Skerrit, who is also the Minister for Housing, stated that the families, in times of adverse weather conditions will be able to remain in their homes and be safe.

"We felt that as the Government we have to ensure that every house we build post Hurricane Maria is built with resilience, so that families can stay in their homes, be safe, feel safe and survive the hurricane with no fear of the roof being blown of or the concrete caving in," he noted. According to the Prime Minister, the technology is being used "has taken into consideration that we are also in the earthquake belt, so in terms of seismic resistance, we also have that in the designs of the buildings."

After moving in into their new homes each family will be given a strata title, which is a form of ownership devised for multi-level apartment blocks and horizontal subdivisions with shared areas.

According to the Prime Minister, this will ensure security with the banks in the event that owners want to secure a loan from a financial institution.

"Each family will have a title in their names for these buildings. This is the same thing we will do in Bellevue Chopin. Every family who will be getting a home, where their homes are not stand alone, will receive a strata title so that they can take this to the bank as collateral and security to get a loan for any need," he said.

Morne Jaune and Riviere Cyrique will also benefit from the housing developments. Twenty-four apartments will be constructed in these communities to provide proper housing for residents.

"We are hoping to increase that number by a further twenty-four because there is a particularly list of people there who need homes, but obviously we started with the most vulnerable. So we look forward to the completion of these homes for the residents of these areas and I know that the villagers cannot wait to move in.

Housing units are also being built in the neighbouring communities of Delices, La Plaine and Castle Bruce.