Thomas Letang: "The whole face of the village was changed" 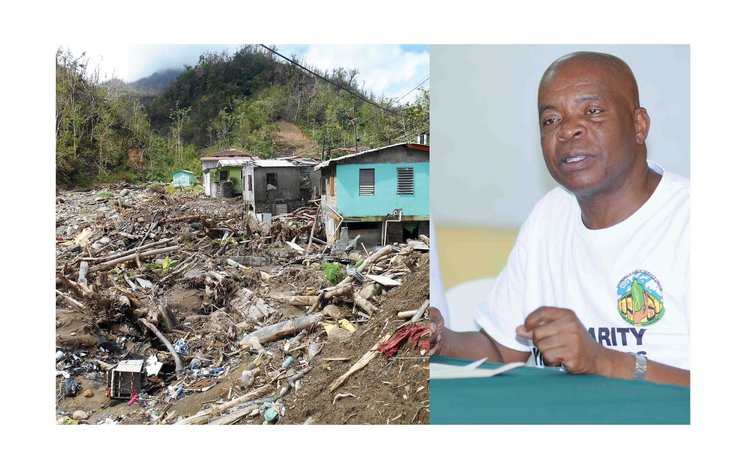 Thomas Letang, a resident of Pichlen, a small village near Grand Bay in the south east of Dominica, was home on September 18, 2017 monitoring the progress of Hurricane Maria.

Letang is the General Secretary of the Dominica Public Service Union (DPSU) and a farmer.

In August 29, 1979 when Hurricane David struck Dominica Letang was a young man; he thought he had seen it all.

"I was very wrong on that one," Letang said.

"The night of Hurricane Maria, I saw something and experienced something that I never felt would have happened. I was following the weather information on the radio from the time I got home and even when it was being said that a category four hurricane would hit us, the first thing that came to my mind was how did that develop so quickly. When the wind started, I looked out of my window…I was going up and downstairs in my house all the time. I really saw something that I could not believe…the wind was strong and I heard galvanize flying all over the place," Letang said.

He said he lives close to the Health Centre in Pichlen. He saw the building disappear and his son's vehicle "washed away."

"While we were there, some people ran to my place screaming for help and I had to open my door to rescue them. They complained that the river had entered their house; a pastor also came and spoke about a landslide. It was like nothing was coming to an end during the night and daybreak was just not coming at all," he stated.

Letang added: "When daybreak finally came, I just could not believe what I was seeing. Debris all over the place, houses without roofs, and vehicles with mud and taken by the river. The whole face of the village was changed. It was a sight to behold and I said if I had to send a picture to my parents, who are now deceased, they would not even recognize the village.

"The following day, I decided to make a trip to my farm along with two other people. It was a huge task since we had to go through the Bellevue end since the Pichlen side was totally out of it. We had to go through hundreds of landslides carefully and at one point I must have misjudged in putting my feet in a slide (pool of mud) and I started to sink. The mud was above my knee and I was stuck. The two guys were ahead of me so I had to scream to them for help and they had to pull me out. It was scary.

"All my crops were gone I was shocked and in disbelief since what I had spent days and months planting was gone in just a few hours. I had exotic plants, they were all gone. I was dumbfounded but said thanks God for life. For the next two to three weeks I cleared and started to plant yams and dasheen and the returns are very good now. It took me about three weeks to clear the farm.

I went to town the next day and it took me several hours…I was tired, wet and sometimes felt depressed at what I was seeing. At one point I had no feelings in my feet. Imagine on one of my trips from Roseau I could not pass and they had to put me in boom of the caterpillar to swing me to the other side of the road," he said.

Letang continued: "It was a tough experience going back and forth. So I was really surprised and shocked sitting on my porch and seeing people coming from Roseau with looted items. They had loads on their head, back and chest and I am saying see the struggles I had to endure to go to town and see those people. Really Dominicans are strong people.

"The devastation has created some challenges for us. We should have also come together as a nation…we failed; Dominicans, I think, we are more divided than we were before. We missed the koudmin like we had after hurricane David."