"Those situations that were looking grim and dim in my growing years, I cherish them now"

President of the Concerned Citizens Movement, Loftus Durand is the SUN'S Man of the year 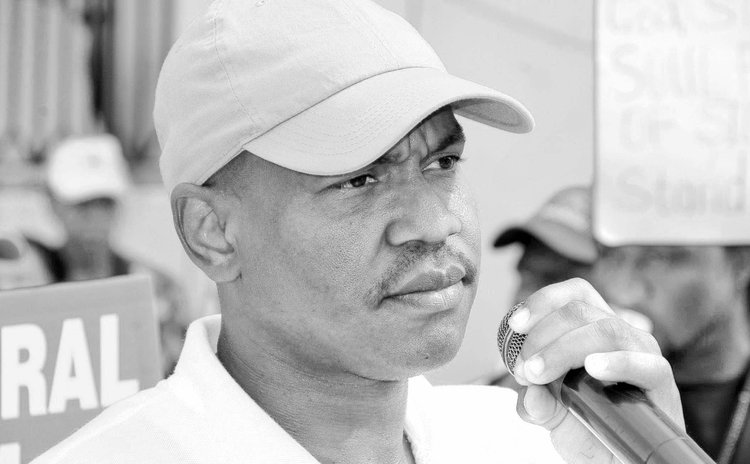 It was a rather tough, oppressive life for a young Loftus Durand growing up in the late 1970s through the 1980s, with penury and indigence cruelly and mercilessly virtually suffocating him.

Raised by a teenaged mum of little to no means, Durand's "grim and dim" life was the epitome of poverty – no money, no running water, no electricity, nothing. His grandfather, Paul Durand, pitched in sometimes, but it wasn't much.

"We had to carry water from the river, carry wood to cook food, we had to go outside in a pit toilet. It was tough, man, it was tough," he recalls.

Durand's mother, Elizabeth Joseph, became pregnant with him when she was 18, depriving her of the opportunity to pursue higher education and "to find herself". When her son was three months old, his father, Martin Durand, walked out of their lives. He provided no financial support, leaving her to fend for herself and her newborn. Needless to say, things didn't go very well, as she appeared desperate, demoralized and defeated by the anger, the pressure and the weight on her fragile shoulders. True, she taught him everything he knows around the home – he can wash, cook, iron, clean, everything – but sometimes the young Durand paid the price for his father's neglect.

Durand was eight years old when his father walked back into his life. The man he had never known wrest him out of the Massacre/Canefield Primary School, which he attended at the time, and took him to Calibishie. For two years the child endured punishing treatment from his dad, before he'd had enough and returned to his mum in Canefield, casting Martin was out of his life again and leaving behind one nightmare for another.

Back then he didn't realise it, but the absence of his father during the formative years created an emptiness in his heart and a hollowness in his soul.

"There were some mistakes I made in my life and I'm sure if he were there I probably wouldn't have made those mistakes. And in retrospect, I can bring it all together. Without this father figure . . . maybe I would be further in my life, he could have provided the direction. I don't look at those experiences as a negative, but I turn them into a positive in terms of now I have my own children, three children, I know there are certain things I will never do in terms of absence from their lives." The 43-year-old says. "For me there was something missing but I didn't know what [it was] until the later years."

After Durand passed the common entrance exams his dream of attending the Dominica Grammar School (DGS) was nearly shattered because his mum simply couldn't afford it. But Ron Abraham and the team at Marpin Telecom (now Marpin 2K4) came to the rescue and provided a full scholarship that covered all his costs. To this day he remains grateful to Abraham and the company.

A reserved and quiet person – something that comes as a shock to those who've heard him argue for electoral reform - Durand made few friends at school. In fact, so unobtrusive was he, his teachers know who he is.

"I was not an outspoken guy, I liked to keep to myself. I went to Grammar School I never had a single demerit . . . Up to now I meet my teachers and I call them, but they do not remember me. I'm very quiet, very reserved," he says.

But this doesn't mean he isn't passionate about the things that interest him. A highly spiritual man, Durand at one time was closely involved in the church. For ten years he served as a Sunday school teacher in the Christian Union Mission church, was an elder for six years, and held a preacher's licence. However, in recent times he noticed the churches in Dominica engaging in unspiritual practices "that I really detest". Therefore, he decided to extract himself, even as he maintains his spirituality.

"I didn't move away from God, but I couldn't take the level of hypocrisy. To put it bluntly, some were devils during the week and on Sunday they were saints."

It's this combination of spirituality and passion that led him to help found the pressure group, the Concerned Citizens Movement, in 2014 to first fight the "injustice" in the electoral system, then other issues such as violence against women and drugs. Durand's other passion is electronics, which he developed way back when he was a child picking toys apart to try to figure out how the worked. It was no surprise, therefore, he graduated from the DGS in 1995, with honours in electricity and electronics, and did further courses in the subject after he left school. It's also no surprise that among the many jobs he's had, the most satisfying was that of linesman and home technician at Sat Telecoms.

"Seeing that I had a love for that kind of field, I found my dream job in that I opened my own business called Lofty Electronic Service, going on my own. Down to this day it's what I do. I still operate my small business."

Durand is quite generous in his praise for people who had an impact on his life – the Roseau Boys' School teacher Luther Martin who "helped me to understand about life", David James of James electronics, who taught the electronics and electricity course, Sat Telecoms for giving him an opportunity to do a job he loves and the inspiration to start his own business, and his wife for tolerating his quirkiness ("if my wife irons a shirt for me, she does it well, but because of how I grew up, I always go back and do it again," he says). But most of all, there's his mum who taught him the many lessons that serve him well today, and his experience growing up in perpetual penury, which failed to break him, and instead, made him stronger.

"Those situations that were looking grim and dim in my growing years, I cherish them now because it's those hard years, those grinding years, that made me what I am today," he proudly confesses as he leaves behind the oppressive life he knew as a child.

"We had to carry water from the river, carry wood to cook food, we had to go outside in a pit toilet. It was tough, man, it was tough"