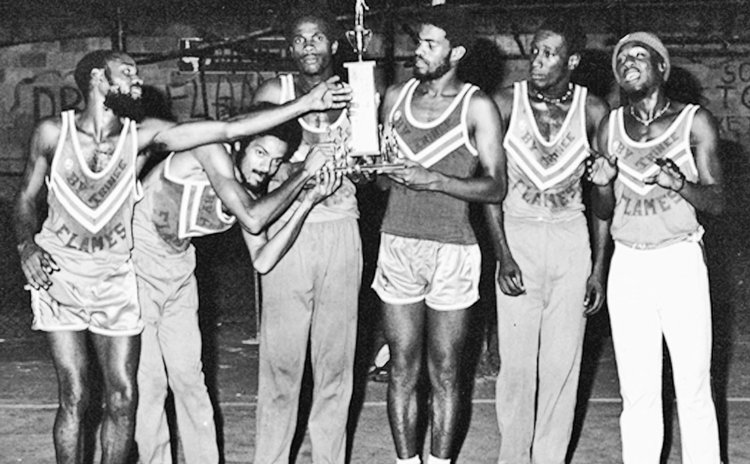 FLAMES Sr. with one of their championship trophies. Photo Courtesy: Neckers

Part I of the article presented on Flames' entry into the basketball arena and peeked at the team's performance from 1974 through 1978. The article continues below:-

Flames From 1979 & Beyond: Hurricane David dealt Dominica a near fatal blow in 1979, but basketball was up and running the following season with Flames adding two more Championships to their impressive collection shortly thereafter.

In the 1982 League competition, among Flames' matches they defeated Eagles, Lions, Cardinals and Wizards but lost to Pros. Subsequently, in the Knock-Out competition they knocked out Harks 73-63, but lost to Pros 91-83 in the next round.

The following year it was "3 for '83" for Flames as they added the Knock-Out Championship, the Hannah Raffoul Play-Off Championship and the Paul Green Trophy to their cabinet. Furthermore that was the year Flames Junior joined their seniors in the Association's three men's divisions. (See below.)

The year 1984 was another interesting one in the history of Flames' Senior. They were declared 1984 League Champions by the Association in a controversial ruling, but were subsequently knocked out 55-70 by Eagles, the team that had been in contention for the League Championship.

The late 1980s saw the Flames losing intensity, although still flickering. In 1988 they were temporarily extinguished, placing 9th among the nine teams, but led Division I in Free-Throw shooting in the League, converting 96 from their 182 attempts.

However, the following year (1989) Flames improved to 3rd position with 3 Wins and 3 Losses and ended up as Runners-up in the Play-Offs, being defeated 2-1. That year they placed 6th (from 7 teams) in Free-Throw shooting, converting 45 from 103 attempts. However, Jeffrey Joseph, amassing 118 points, was the League's 2nd highest aggregate-scorer.

Flames competed in DABA's two divisions in 1994 (Divisions I & II) but could only cop the Division I Best Defensive Team accolade. However, that was the year Garth Joseph departed for the USA to attend school and play with the College of St. Rose Golden Knights in Albany, New York.

Flames Senior made their final flicker between 1994 and 1996. However, Flames remained on DABA's games roster for a few more years, in the second level division (later renamed Division I in 1997).

Flames In Lower DABA Divisions: There are a few established senior Division basketball teams which simultaneously had 'junior' teams in the national league. That list includes St. Mary's Academy, Dominica Grammar School, Pros, Hoyas, Clouds, Cardinals, Flames and possibly others. Also, for the records, Flames were represented in all three men's divisions of DABA's national league.

Flames may have been the third team in Dominica's basketball history to have had a 'junior' team playing at the same time – at least for a while – as the seniors. St. Mary's Academy had led the way, followed by Dominica Grammar School. Pros Junior and Flames Junior may have debuted the same year.

Flames Junior entered the scene in 1983, going on to capture the Division III Knock-out championship in 1984. Thereafter there was no junior or lower Division Flames on the cards until several years later.

Steve Williams, M. Roach and D. Roach were some of the high-scorers for Flames Junior, which also included C. Gibbons, P. Piper and others.

The Final Flicker: Let's fast-forward the game clock towards the end of the 20th Century. By then, Flames Senior were bowing out of existence, but a Flames team was still on the roster, playing in the 2nd level division which, at the time, was re-named 'Division I'.

From available records, in 1997 Flames DI lost to Tigers 61-73 with Dion LeBlanc getting 27, and were narrowly defeated by Marigot Sonics 52-53. That year Michel James got called up for Trials to the senior national team.

From available records for 1999, it appears that Antilles Flames had a very disappointing season. They scorched Police 80-67 and may have had only one other win for the season. They lost narrowly to Massacre's Panthers (57-60), Pichelin's Pacers (51-55) and Sout' City Sixers (71-76), among other defeats.