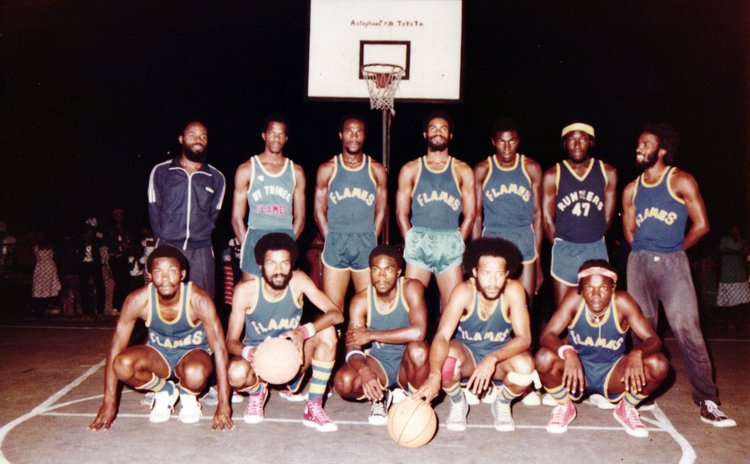 Part II of the article presented on Flames' performance from 1979, including their participation in lower level Divisions. The article continues below:

Flames In Lower DABA Divisions: The Final Flicker (Ctd) - The last players to carry Flames' flag included Imran Dyer, Andy Hilaire, André John, Davis Joseph and Bernard St. Claire (in the 2nd level division). On account of the Flames' longevity, coupled with out-migration, some of the younger players who wore Flames colours may have never met or even heard of some of the 'older heads'.

It must be noted that Flames' big-name scorers while the team burnt at their hottest included, but were not limited to Oliver Burton, Seibert Didier, Alphonso Etienne, Augustus Harris, Garth Joseph, Jeffrey Joseph, Moses Lewis, Peter Skerrit and others.

Flames' Cabinet: For the ease of reference, the following is a summary of Flames' Championships and other team awards/accolades:-

Flames Players on National Team: Over the 25 years raising the mercury in our basketball thermometer, Flames produced quite an impressive set of players who proudly represented Dominica on the senior national basketball team, from as early as their second season on the court. One of those players captained the national team for a short period.

Most of those players would have joined other teams in the league before or after playing with Flames, but Jump Ball will focus on those individuals while wearing that dark-blue Flames uniform with gold trimmings.

Flames Raising Funds: During Flames' early years they organized two fund-raising events, while some members participated in an event organized by the national association.

Flames had quickly developed a substantial following at the Park to the point where, in 1977, The New Chronicle wrote, "By-Trinee Flames with more than 95% of the support at Windsor Park…" on a night when they played Cardinals. And so with their growing fan base the team produced printed T-Shirts which bore the text, BY-TRINEE FLAMES; these were sold to Flames' fans and members of the public.

The team had organized a Fair at the Windsor Park, but unfortunately the event was unsuccessful.

Some members of the 'original' Flames also participated in a fund-raising Marathon Basketball Match which was organized by the Basketball Association in 1974.

Touring Flames: Flames undertook only two overseas tours during their lifetime where they participated in 'Friendlies' against their hosts. In 1976 they undertook a joint tour to Martinique with rivals Cardinals, and some time afterwards they made a tour to Antigua.

Flames' Sponsors: The three Flames teams which participated in the national league had five sponsors combined over Flames' lifespan.

The senior team trotted onto the scene as White Horse Flames in 1974, White Horse being a brand of whisky. Three years later (1977) the team was billed as By-Trinee Flames and remained so named until 1983 in the first instance. By-Trinee, a partnership between businessmen Eusif Nixon (Trinidadian), Norris Prevost and Sheridan Gregoire provided tremendous support to Flames.

The senior team changed sponsors again in 1984, registering as Continental Flames until 1986 before reverting to By-Trinee Flames from 1987. In their final years they were sponsored by Antilles Cement Lumber Ltd. and played as Antilles Flames.

Baron's Enterprises sponsored Flames Junior which registered as Baron's Flames. The 2nd level division Flames (Intermediate / Division I) of the late 1990s was sponsored by Antilles Cement Lumber, and though unsponsored in 1997 and putting on a No-Show in 1998, Flames II were billed as Antilles Flames in their final year (1999) on DABA's roster.

On behalf of Flames I, II & III, Jump Ball says THANK YOU to the sponsors, who helped keep the Flames flickering.

Flames as Referees: At least six members of Flames officiated in DABA games. Bernard Polydore was selected by the national association as one of two reserve referees for the 1984 OECS Basketball Tournament which was staged in Dominica. Other Flames members who refereed include Alphonso Etienne, Seibert Didier, Ywaine Magloire, Kevin Sorhaindo, and Augustus Harris who also served as the Dominica Basketball Officials Association's President for two terms.