Those who refuse to give justice shall drink bitter waters 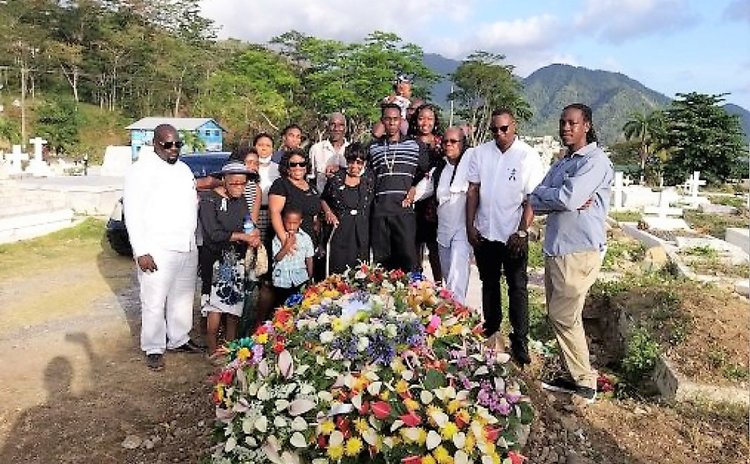 Funeral of man who died in police care

Nearly 100 days after the passing of Kerwin "Slobby" Prosper, the Kingshill man was finally laid to rest. However, notwithstanding his burial, the family says their pursuit for justice continues.

Over the carnival weekend–February 15, 2021–whilst in Police custody assisting with an investigation, Prosper became unresponsive and was later pronounced dead by a medical doctor according to the Acting Chief of Police, Lincoln Corbette.

Corbette said, following the autopsy report, he then requested assistance from the CARICOM Implementation Agency for Crime and Security (IMPACS) in their investigation of the death of the 36-year-old.

However, Prosper's family said he suffered from no underlying medical condition and laid the blame for his death on some members of the Commonwealth of Dominica Police Force (CDPF).

Three investigators from CARICOM's RIMS arrived in Dominica on March 17, 2021, to begin their investigation; however, three Officers of the CDPF under investigation for Prosper's death sought leave of the court earlier this month for Judicial Review.

In their pursuit of justice for Prosper, the family welcomed assistance from CARICOM IMPACS but they too have consulted their attorney, to determine their next course of action.

Speaking exclusively to the Sun, Devin Joseph, brother of the deceased said, the funeral and burial of his brother has been one of his most difficult ventures.

"It was hard but I was able to lay him to rest by the grace of God. As a strong Catholic, I was taught revenge is mine, says the Lord so I leave all the fighting to God. A burial without an arrest of my murdered brother wasn't easy but I needed to lay my brother down."

Joseph said that since no arrest has been made in what he described as his brother's murder, "what if they [the officers under investigation] were to flee the country, who do we hold accountable?"

He said the only way his brother will rest in peace is when those responsible for his death are held accountable.

"I can't fight the police, but I can pray. Knowing your loved one was alive and well and hearing how he died, let's see the justice this country has to offer. Those who don't live by the law shall die by the law. My brother is gone but those who are responsible for justice and refuse to give it shall drink bitter waters," Joseph said.