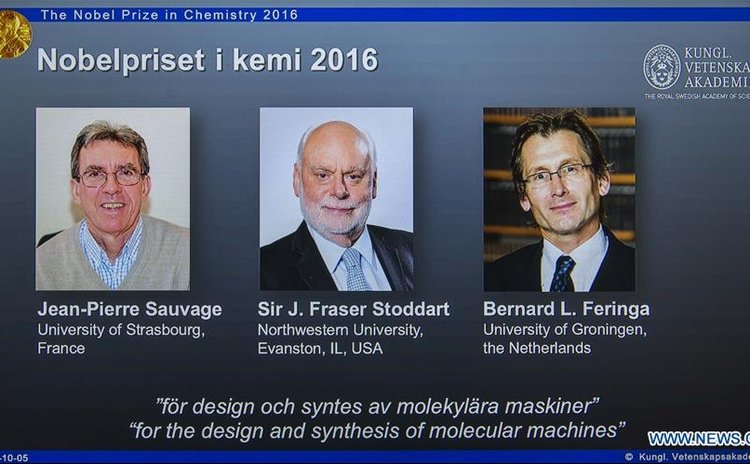 The prize was awarded to Jean-Pierre Sauvage, Sir J. Fraser Stoddart and Bernard L. Feringa "for the design and synthesis of molecular machines."

In a telephone interview, Feringa said he was "shocked, so honored, and so emotional" at the news. He emphasized that "all credit should be given to my co-workers for their fantastic work."

Talking about application potential of their designs, he said "once you can control the movement at a molecular level, you can think of all kinds of movements."

In an official statement, the Royal Swedish Academy of Sciences said: "2016's Nobel Laureates in Chemistry have taken molecular systems out of equilibrium's stalemate and into energy-filled states in which their movements can be controlled. In terms of development, the molecular motor is at the same stage as the electric motor was in the 1830s, when scientists displayed various spinning cranks and wheels, unaware that they would lead to electric trains, washing machines, fans and food processors.".

"Molecular machines will most likely be used in the development of things such as new materials, sensors and energy storage systems," it added.

This year's prize amount is 8 million Swedish krona (930,000 U.S. dollars), to be shared equally between the laureates