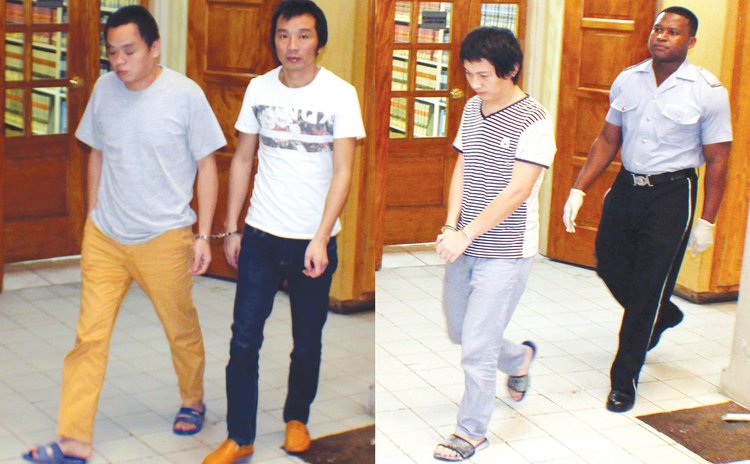 After sentencing, men are taken to jail

Judge Veronica Charles-Clarke has sentenced three Chinese nationals to three years in jail for the theft of more than EC$100, 000 from the ATMs of the National Bank of Dominica. The men pleaded guilty.

State Attorney Sherma Dalrymple with the services of a Mandarin interpreter told the Roseau High Court that the three men arrived in Dominica between July 3 and 5, 2016.

Yulong Xie (27) and Jianhui (37) arrived in Dominica on Sunday July 3, 2016 and Yong Zhong (39) arrived on Tuesday July 5. They all lived at the Fort Young Hotel. Then they got to work on ATMs, the property of the National Bank of Dominica (NBD) from which they stole $104,705 from Tuesday July 5 to Thursday July 8.

On July 7 NBD officials noted a series of withdrawals amounting to $90,000 from the ATMs at Jolly's Pharmacy and Whitchurch Supermarket. Surveillance cameras at these machines noted three Chinese nationals using the ATMs. The bank notified the police that same day and gave the video recording to the police which showed the accused men using the ATMs. The recording provided descriptions of the men who operated mostly at night.

On Friday July 8 about 8:30pm police officers from the criminal investigations department (CID) mounted a stakeout in Roseau looking for the men matching the descriptions in the video footage. About 9:30pm the police surveillance got Xie and Wen withdrawing money from the ATMs at Jolly's Pharmacy and Royal Bank of Canada respectively. They were confronted by the police officers and a search made of their persons and possessions. A large amount of Eastern Caribbean currencies and magnetic strip cards were found in their possession. They were arrested on suspicion of theft and taken to Police Headquarters.

Later that evening the police searched Room 105 at Fort Young Hotel where the third accused, Zhong, was met. A search of the room yielded a suitcase with cash, two laptops and other items. Yong Zhong was arrested and taken to Police HQ.

After contact the Financial Intelligence Unit the police proceeded to arrest the three men. The police found a total of EC$121,600, US$20,525 and other currencies were found in their possession. Also found by the police were 17 ATM schemers, 2 magnetic strip cards, reading and writing devices, and 261 magnetic strip cards marked VIP.

The Chinese men were brought before a Roseau Magistrate on Tuesday July 12 when the charge was read to them. They were arraigned at the Roseau High Court on Tuesday January 10, 2017 and all pleaded guilty to the charge of theft.

Attorney Bernadette Lambert mitigated on behalf of the three prisoners. She noted that they had pleaded guilty at the earliest opportunity and had saved the court time. Because of the plea, one-third of the notional sentence was deducted. Lambert said that the police had recovered the money and that the men had no previous convictions and they were of good character.

Lambert added that the men were small scale farmers and factory workers. One of them, Xie, was the sole breadwinner of his family and had a young wife who was due to give birth in January. Because of their economic background they allowed themselves to be coerced into committing this offence, Lambert said. They regret their actions terribly, continued Lambert, and from the outset expressed their deepest remorse for their actions. They humbly requested the court to temper justice with mercy and to not impose a custodial sentence on them, the lawyer added.

The maximum sentence for theft is 10 years in prison.