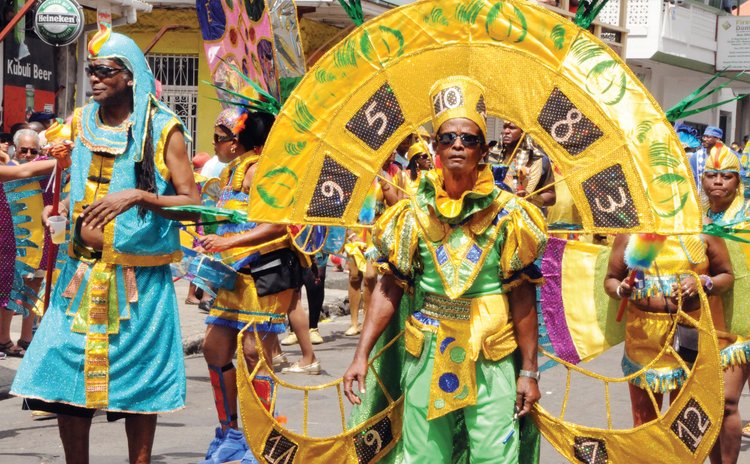 Some members of the Thunderbirds carnival band

Thunder Birds, the decades old carnival band, is back on the list of bands scheduled to perform during the Monday and Tuesday carnival street parade in 2018 after boycotting the costume parade in 2017.

Recall that two years ago, in 2016, Thunder Birds challenged the decision of the judges and subsequently took the Dominica Festivals Commission (DFC) and the Discover Dominica Authority (DDA) to court after the DDA and DFC awarded another band the prestigious Band of the Year Award. In 2016, Thunder Birds hit DDA with a court injunction preventing the authority from awarding the Band of the Year prize to the Afrikulture Stilt Walkers.

Then in 2017, while awaiting a settlement of the dispute, Thunder Birds boycotted carnival activities and later that year went to arbitration and settled the issue.

According to an official of the Thunder Birds/ Carnival Corner: "We went to arbitration which was the best thing and we settled that matter with the DFC where they gave us a particular amount of cash for the non-compliance. I don't know if any action was taken against Afrikulture Stilt Walkers (remember the matter was against the DFC). It was always our view that as soon as that matter was amicable settled we would be back into taking part in competitive carnival activities." According to the settlement, Carnival Corner moved up to second place as a result of the decision taken at arbitration (the band was at third place).

In an interview with THE SUN, a Thunder Birds official blamed the DFC/DDA for not settling the issue sooner.

"These people (DFC) are one-sided. They knew exactly that the Afrikulture Stilt Walkers did not comply with the rules and regulations. We provided physical evidence (audio, video) but because of certain connections they still went ahead awarding them Band of the Year," the official stated.

"We had certain compelling information in our armory, so we were very certain and confident that we would have prevailed. In the end, the Judge recommended that we go sit and settle the matter and we did just that. In the end common sense prevailed. Our interest was not the money at all; we just wanted to set some kind of precedence with the carnival committee telling them that they have to do things by their set rules and regulations," the Thunder Birds official said.

Meantime, Cesar Emanuel of the Thunder Birds said the dispute is now behind them.

"Our boycott last year was a blow to them; they felt it because in 2017 on Carnival Monday and Tuesday, the two biggest bands were not on the road, it was a great void. We are now prepared for 2018 and ready," he said.

Emmanuel was critical of the DFC/DDA for refusing to change the date of Carnival for 2018 after many arguments to the DFC on the need for the change.

"Carnival should have been pushed back to May Day weekend. We told that to the DFC but they took note and ignored us and went on with their Lent-based carnival. Our carnival is Lent-based and with that heavy Catholic presence in the society, I don't know what these guys are afraid of. With the stress that Hurricane Maria has placed on the economy especially the business sector, a major sponsor, Carnival should not have taken placed in February," Emmanuel said.

He continued: "That would have given people the chance to see if a change (of date) works. Maria gave us that chance and we failed to capitalized on it…it should have been moved. The DFC moved the Queen Show to April, but they failed to move the others. They want a Carnival Queen not from carnival.

As far as the future plans for Thunder Birds is concerned, Emmanuel said: "We were going to do a very extensive piece celebrating the 40th anniversary of Dominica's carnival… "Jewels of Dominica". We now doing "Wicked Maria" (using) cheap costumes etc and we call on all to come play mas with us."