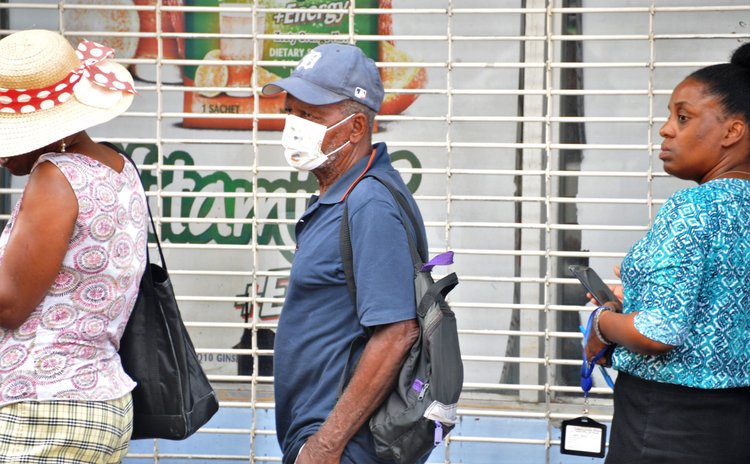 On Thursday at 10 a.m. the United Workers Party (UWP) held a press conference on the coronavirus at its party headquarters on River Street, Roseau. The topic: coronavirus.

One hour later, at 11 a.m., the government of Dominica held its own press conference on the current health crisis at the conference room of the office of the prime minister. The topic: coronavirus.

What is going on here? Why are these two political entities conducting two distinctly different press conferences on the identical subject on the same day? Why not one joint press conference; isn't the coronavirus the common enemy?

And the mood of the press meetings could not have been more dissimilar. While the government persisted in its self-evaluation and self-congratulation of its efforts at containing the virus so far, the UWP continued to argue that the cabinet of Prime Minister Roosevelt Skerrit has been mismanaging, to everyone's peril, that crucial period, the calm before the storm, before Dominica confirms the presence of "Patient One".

This leaves us to wonder whether the Roosevelt Skerrit administration is sincere about "getting all hands on deck" in the ongoing battle against the coronavirus pandemic.

While Dominica continues the useless, self-defeating, partisan, puerile, political-party civil war, which it took to a completely new destructive level during the last general election campaign, other islands in the Caribbean, Jamaica for instance, has been trying to ignore its party differences as the country prepares to collectively fight the virus. Jamaica recently appointed a special select committee consisting of members of the ruling Jamaica Labour Party (JLP) and the opposition People's National Party (PNP) to review their country's response and developments related to the current COVID-19 pandemic. In Jamaica all hands are on deck; why can't Dominica do likewise?

At a national consultation held at the Goodwill Parish Hall on Friday 13th March 2020, Leader of the Opposition Lennox Linton proposed the establishment of a by-partisan committee to fight the pandemic. Responding to Linton's suggestion, in his winding-up speech, Prime Minister Roosevelt Skerrit said that Linton's by-partisan idea was a good one and the Cabinet would implement that recommendation.

But when we asked Linton, at the UWP press conference, about the state of the establishment of the committee, six days after the national consultation, Linton said there was absolutely no movement, not at all, on that score.

So why has it taken a week to make a move that both political parties agree will assist in the battle to control a virus that the experts say may infect and kill millions around the world before a appropriate treatment and a suitable vaccine can be developed?

Dominica, it seems, is in the process of politicizing the coronavirus crisis in the same way that we politicized the recovery programme after the devastation of the category five Hurricane Maria in 2017. We are about to do it again and, if we do, it is absolutely assured that all of Dominica will be losers.

Because, after all viruses have no respect for political colours, for green, for blue and for red; viruses do not care whether you are Catholic or Methodist or Rastafarian; viruses do not consider whether you are rich or famous or poor. It kills everyone whose immune system allows it to invade, multiply and infect. Therefore, the messages and the strategies that we design to combat this deadly virus must be clear and direct and everyone must be convinced that everyone else is working together to defeat the enemy. It's as simple as that.

But unfortunately, due to the recent political campaign experiences, supporters of the UWP do not trust information that originates from the government of the Prime Minister; and, similarly, supports of the ruling party seem to believe that the Prime Minister can do it alone- there's no need for the blues who always see the negative side of the country's development anyway. But the scary thing is: the government may be telling the truth about the coronavirus but thousands of Dominicans do not trust that message, or more correctly, do not trust that messenger. So we have a serious problem.

But what is extremely perplexing to many Dominicans is why is there such piecemeal and uncoordinated efforts at preventing, or delaying, the presence of the virus in Dominica. The virus may already be here and is being spread by unsuspecting persons who have the virus but are asymptomatic. So while we wait for our first official case, to be called "Patient One", he or she might actually be "Patient 25". No one knows.

Over the last days and weeks there has been widespread calls from Dominicans who have been watching, on television, the bodies of the victims of COVID-19 pilling up in churches in Italy as the health system there became overwhelmed. They want the government of Dominica to close all ports, shutdown schools, restrict movement and gatherings of people.

But there is a gaping hole in the Government's argument because at the same time we see that Grenadians, who have also not discovered Patient One, have taken the same "drastic "measures that our Dominican government says it is not afraid to take but has so far declined.

In our view, Dominica must learn from the mistakes of the Italian government and from the successes of China and other countries and areas severely affected by COVID-19. Apparently China's decision to quarantine millions of people has yielded results and Italy's meandering response to the taking of restrictive action has led to the death of thousands.

Last Wednesday China reported its first day with no locally transmitted coronavirus cases for the first time since the pandemic began last December.