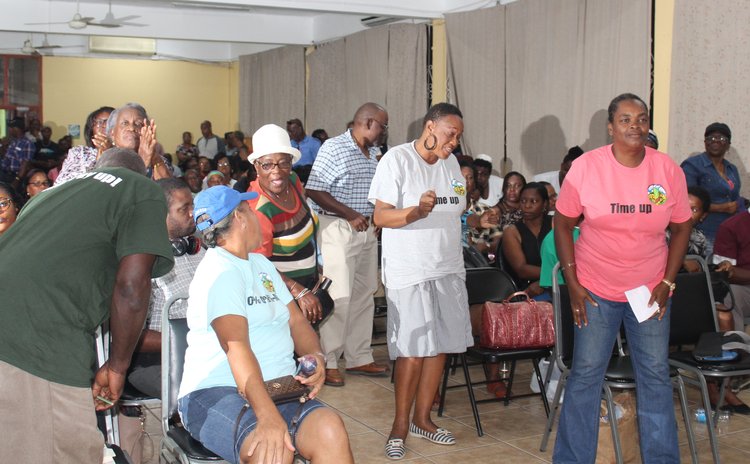 Participants at the DPSU meeting

Inadvertently the Roosevelt Skerrit administration may have awoken the tiger of the Seventies, the trade union representing civil servants, and then known as the Civil Service Association (CSA) that toppled the Patrick John Dominica Labour Party (DLP).

At a boisterous, militant meeting last week the current members of the CSA, now known as the Dominica Public Service Union (DPSU) has threatened to cause major disruption of the status quo if its demands continue to be ignored.

"What you see today is the beginning of things to come. We will be going all out to get what we want and what is due to us," said DPSU general secretary Thomas Letang to thunderous applause from hundreds of civil servants who filled the large hall last Thursday at the DPSU headquarters on Valley Road, Roseau. "I repeat nothing is going to keep us back."

The insult that apparently woke up the civil service union was the administration's disregard of a letter that the DPSU sent to government in December 2018 at the beginning of salary negotiations. Government did not reply until last Friday.

"No acknowledgement… total disrespect for the union," said Letang.

Earlier, while the DPSU was planning that meeting of its members Prime Minister Roosevelt Skerrit announced that he too planned a series of meetings with public officers beginning with 100 junior clerks "to hear from them directly, what their issues are; what they would like to see…"

"As Prime Minister, I am embarking on a series of discussions with employees of the State…I will be meeting with a wide range of public servants over the next few days starting with the meeting with the junior clerks," Skerrit said on State-owned DBS radio.

"If people have serious issues to discuss, then we can engage ourselves in an atmosphere of mutual respect where these issues can be dealt with," he said.

At the meeting held at the Financial Centre on Thursday, Prime Minister Skerrit announced that government is to appoint 53 junior clerks into the public service.

"Currently there are 53 vacant junior clerk positions…and I will give immediate instructions to the CPO to move to fill these 53 vacancies to allow many of you here to be appointed in the public service," he said adding that there are many reasons why these positions have not been filled.

"Somebody may be on study leave; somebody might be acting in another position," Skerrit said. "I am not saying this to give justification or to pacify your concern, because I am sharing your concerns."

Skerrit also announced that Government had plans to construct a new administration building.

"They are getting the same salary for ten years and you telling them about headquarters," Letang reacted. "What headquarters you talking about?"

Responding to the Prime Ministers obvious strategy of divide and rule Letang said: "The Prime Minister is calling junior clerks to a meeting on the very blessed day when we are having our meeting".

Letang added: "I say to the Prime Minister wheel and come again. I told you nobody can stop us, nobody."

Reacting to allegations that the government may victimize junior clerks who did not attend the Prime Minister's meeting, Letang warned that it would be a mistake to penalize any civil servant.

Apparently the DPSU is ready for a battle and it has set its red line that Government must not cross. Letang said protests are being contemplated.

Letang said the union is also planning to protest poor working conditions, victimization for political views opposed to the ruling party, favoritism, and the situation with workers at the Public Works Department and the Princess Margaret Hospital.

The protests are to be held every Friday, Letang said.

Apparently the administration listened: Letang told DBS radio on Saturday that Government had written to the DPSU setting a date for submitting its salary increase counter proposal. The DPSU says it wants an increase of 10% in salaries and wages for the triennium 2018 to 2021.