Tiyani Behanzin: "I dare them to put my father's name on that building in Melville Hall" 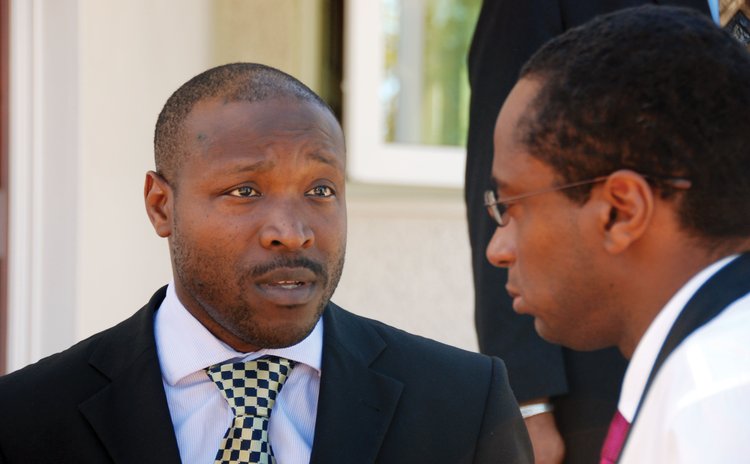 Dominicans have been told to come to the Melville Hall airport in "bus-loads" on the evening of October 27, 2014 when the Roosevelt Skerrit led government will be renaming Melville Hall the "Douglas Charles" airport after the later Roosevelt Douglas and Pierre Charles, two former prime ministers of Dominica who died in office.

But if the sons of the later Rosie Douglas have their way that will not happen. They say they were not consulted and it's disrespectful to their late father. Sean Douglas, Rosie's s nephew who served as Prime Minister Roosevelt Skerrit's press secretary is also vehemently opposed to the move.

"When I first heard of the government's intention to rename the Melville Hall airport after Rosie and Pierro, I was amazed because I know Melville Hall does not have a future", Sean Douglas said on the Q95 FM radio programme "Law on Q". He said that, Rosie, in 2000 recognized Melville Hall did not have a future and in September 2000 while in New York, had several meetings among with senior Chinese officials. "He signed a document with the Chinese and in that Memorandum of Understanding was to build an international airport at a cost of US$300 million dollars," Sean Douglas stated.

He continued: "You are coming now in 2014, to name an airport after Rosie and Pierro, two of our illustrious prime ministers knowing fully well that ten years from now, Melville Hall will be a place for cargo. I don't see the rationale behind it and the government has not thought about this thing. It shows a lack of respect for Rosie and Pierro. Rosie was a Caribbean internationalist, a visionary and a diverse figure and to name Melville Hall after Rosie tells me those guys are not thinking," he said.

Sean Douglas disclosed that he got a call from Emanuel Nathan (an advisor to PM Skerrit) about two weeks ago asking him for Cabral's number (Cabral Douglas is son of Rosie Douglas).

"Not able to get Cabral, he called me back and said 'oh, by the way, we naming the airport after Rosie'; at that point he did not say Pierre Charles," Sean Douglas said.

Sean Douglas says he would have waited for the international airport or something big to name after the two former prime ministers. "These guys are trying to get the support of Pierre and Rosie with election looming. They have deviated from the principles of what Rosie and Pierre articulated," he said.

"The Melville Hall was built by Franklyn Baron and opened by E.O. LeBlanc and the terminal building was built by Patrick John, so I would think that if you are renaming an airport it would be after these three. There is nothing in Dominica named after Baron. I believe that Rosie on Monday October 27th, 2014, when this airport is being renamed…the Rosie that I know for 24 years, will be turning and somersaulting in his grave, a man of that oomph's and stature and substance to call that Melville Hall after him knowing fully well that soon it will be condemned to a shed, is shocking. I am totally against this renaming and what these guys are trying to do. But I am not surprised these guys are trying to wrap the cloth of Rosie and Pierre around them as they prepare to steal another general election," Sean Douglas said stated.

"I will not be attending that function. In fact, I was not invited. My brother Kim Douglas will also not be attending. Government plans to build an international airport so how does that square up in a few years? I dare them to put my father's name on that building in Melville Hall, they will see another side of me. I will make sure that I raise a group of conscious men and women and enter into the political race that is going on. Let them be brave…these lost souls, let them be brave and put my father's name on this building and disrespect him and they will see," he said.

Justina Charles is the wife of the late Pierre Charles and is Minister of Culture in the Skerrit- led government. She has made no comments on the matter.