Talk on the construction of an international airport heats up again as St. Kitts' Dr. Denzil Douglas shares his experience with DAIC 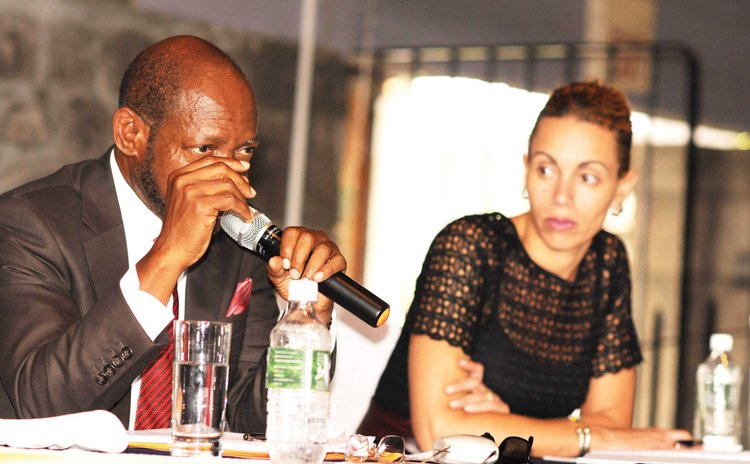 When, how, where and who will build an international airport in Dominica has always been questions that have baffled politicians and proposers.

Now that the nation of St. Vincent and the Grenadines has recently built its own international airport and has left Dominica with the ignominy of being the only major island in the Eastern Caribbean without an international airport, finding answers to these questions have now become more urgent.

So, last week Thursday, the Dominica Association of Industry and Commerce (DAIC) "chewed" on the subject at its luncheon at the Fort Young Hotel with guest speaker The Right Honourable Dr. Denzil Douglas, Leader of the St. Kitts and Nevis parliamentary opposition and former Prime Minister. Dr. Douglas spoke on the subject: "An International Airport as a Development Strategy - the St. Kitts Experience."

According to Dr. Douglas, an international airport will open any country "to opportunities and conveniences that would never exist in the absence of such a facility".

He suggested that agriculture, tourism, manufacturing and every other sector would benefit from better air access to Dominica.

However, he advised that such a venture cannot be undertaken solely by a government and based on his experience "an undertaking of this magnitude, with the benefits so widely dispersed throughout the entire society, would best move forward as a public/private partnership".

But because of Dominica's terrain, the cost of the construction of an international airport will be extremely high, he said.

"Indeed, constructing airport facilities that can handle long haul flights by international airlines will be extremely costly, and would likely require, as was the experience in St Vincent, the levelling of hills and the filling of valleys — in other words, a complete re-structuring of Nature's carefully constructed topography," said Dr. Douglas.

Nevertheless, Douglas wondered whether the building of an international airport would be in keeping with the posturing of Dominica as the Nature Island of the Caribbean.

"You have all the assets to place you as a leading Caribbean destination — but only you would know the extent to which this is compatible with your unique standing as "the Nature Isle"....or whether this is the direction in which you even wish to go," he said.

Speaking to about 50 of Dominica's leading business people at the luncheon, that included Eliud Williams, the former President of Dominica, Dr. Douglas said the competition for stay over tourists in the Caribbean is fierce, and equally cut-throat in the niche eco-tourism experience which Dominica offers; so it's sensible to make travel to the island easier.

Dr. Douglas proposed that all Dominicans should stand behind such a massive project, including the political parties in opposition.

"What is needed, however, at a time of Dominica's choosing, is a conversation — indeed, many conversations — at the national level, as to the cost, and the benefits; the advantages and the disadvantages — TO DOMINICA - of an undertaking as massive as the construction of an international airport," Dr. Douglas said.