Today is the Funeral of the Late President Dr. Nicholas Joseph Orville Liverpool 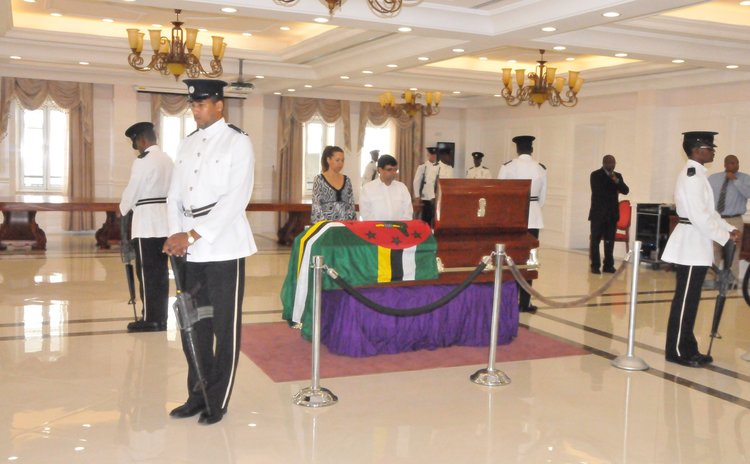 Police and public view coffin at the State House on Thursday

The Dominican Flag will is being flown at half-staff on all public buildings in the State during the period of mourning – Tuesday, June 2, 2015 to Friday, June 19, 2015.

Dr. Nicholas Joseph Orville Liverpool, D.A.H. served as President of the Commonwealth of Dominica from October 2, 2003 to September 17, 2012 after a long and distinguished career as a law lecturer, judge and diplomat. The former Head of State was born in the southern village of Grand Bay on September 9, 1934.

In 1945, former President Liverpool came first in the island examinations and won the Open Scholarship to attend the Dominica Grammar School, where he obtained the Cambridge Senior School Certificate in 1950. He continued his education at Hull University from 1957 to 1960 where he obtained LL.B. (Hons.). He was awarded a Commonwealth Scholarship to read for a Doctorate degree from the Sheffield University from 1962 to 1965. His doctoral thesis was on "The Law of Succession in the West Indies".

Dr. Liverpool then migrated to Ghana in West Africa where he lectured for two years, after which he journeyed to Canada on a Research Fellowship to trace and publish "The History and Development of the Civil Code of St. Lucia" at McGill University in Montreal.

He returned to Dominica in 1968 and joined the law firm of Mr. K. H. C. Alleyne Q.C., but after two years he was persuaded by a friend who was then the Minister of Education in the Bahamas to open a Law School in that country. 1970 was an eventful year for Dr. Liverpool for in that year he also married Miss Verna Williams, and attended the first formal meeting of Caribbean Judges and Lawyers convened by the Organisation of Commonwealth Caribbean Bar Associations (OCCBA) in Jamaica to discuss the establishment of a West Indian Court to replace the Judicial Committee of the Privy Council.

In 1973 Dr. Liverpool acted as a High Court judge in Antigua and Montserrat, but the lure of academia took him, early in 1974 to the Faculty of Law at Cave Hill where he worked from 1974 to 1992. During that period he served as a member of the Council of Legal Education, Head of the Teaching Department, Deputy Dean and Dean of the Faculty of Law.

In 1979 a disastrous fire destroyed the building which housed the High Court and the Registry in Roseau, this was followed by the devastation of the island by Hurricane David. At a time when many professionals were leaving the country, Dr. Liverpool took no-pay leave from the University for one year to return to Dominica to help his island.

Dr. Liverpool assisted in revising the laws of St. Vincent, Antigua and Barbados; and he was solely responsible for the revision of the subsidiary laws of Belize, Grenada and Guyana. He served as a part-time Court of Appeal judge in Grenada, Belize and the Bahamas; and was a full-time judge of the Court of Appeal of the OECS from 1992 to 1995.

In 1998 he was appointed Ambassador of the Commonwealth of Dominica to the United States of America, serving in that position until 2001. Dr. Liverpool was awarded this country's highest Honour, the Dominica Award of Honour (D.A.H.) in 2003. He was Chairman of the Police Service Commission from 2001 to 2003 and Chairman of the National Telecommunications Regulatory Commission from 2002 to 2003. In 2008 he was bestowed the Order of the Caribbean Community (O.C.C.) by the Heads of Government of the Caribbean Community. He is survived by his wife Verna and five children.

The body of His Excellency the late Dr. Nicholas Joseph Orville Liverpool was laid in state at the State House Conference Centre on Thursday, June 18, 2015 from 8:30am to 1:30pm.