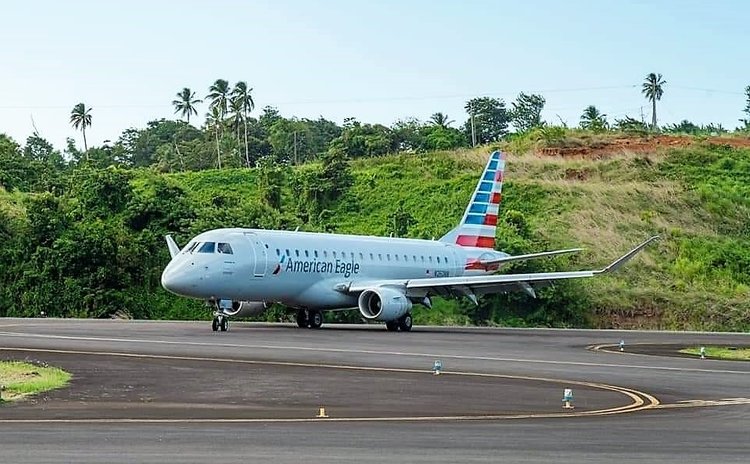 With the green hills in the background, American Eagle at Douglas Charles

Last week there was the news that American Airlines will make direct flights from Miami to Dominica.

The company announced that it will be launching two new Caribbean destinations from Miami International Airport (MIA): Dominica and Anguilla.

The direct flights to Dominica will operate twice a week, on Wednesdays and Sundays, starting on December 8 to the Douglas-Charles Airport and beginning on Dec11 to Clayton J. Lloyd International Airport in Anguilla.

Last month, Dominica welcomed the first American Airlines jet flight which performed a proving flight run, typically the last technical or operational hurdle in the process of an airline seeking to obtain an air operator permit for destinations where it has an interest to service.

While expressing his excitement over his new position, Sebastien said he intends to carry out the responsibilities of his appointment to the best of his ability and to continue to operate as he has throughout his career.

The Government of Dominica to introduce new changes to the country's protocols for children aged 2 years and above traveling to the island.

In making the announcement last week, Health Minister Dr. Irving McIntyre said the "minor adjustments" to the country's protocols will help to strengthen its defense against the Covid-19 pandemic.

"Since these children above two, three, four, and five years most probably will not be vaccinated, that is why the possibility of an antigen test will be done on arrival," he said.

The Minister further revealed that no primary contact will be allowed to quarantine at private residences as obtained previously in the clusters in Delices, Mahaut, and Jimmit.

Furthermore, r. McIntyre said primary contacts must remain in selected Safe in Nature (SiN) certified properties as an alternative to the government quarantine facility and these contacts will be assigned a red risk ban indicating in-room isolation.

Meantime, effective august 3, 2021, Dominica will temporarily suspend Community origin treatment on imports of a specified list of goods that are imported from more developed countries (MDCs) of CARICOM and the rest of the world.

In a release, the Ministry of Trade advised the general public that Article 164 of the RTC is being implemented "to honour its obligations under the Revised Treaty of Chaguaramas (RTC) and to provide an environment of growth in the manufacturing sector."

It adds that the objective of the decision is to enable sustained increases in trade within the OECS and Belize.

The Dominica flag flew high in the opening parade at the 2020 Tokyo Olympic Games, as this year's flag bearers Dominican triple jumper Thea Lafond and 800 metres runner Dennick Luke walked across the stage.

Dominica will compete in athletics, with the 2018 Commonwealth Games bronze medalist Thea Lafond in the discipline of the triple jump.

Lafond will be joined by Dennick Luke who will represent Dominica in the 800-meter event.