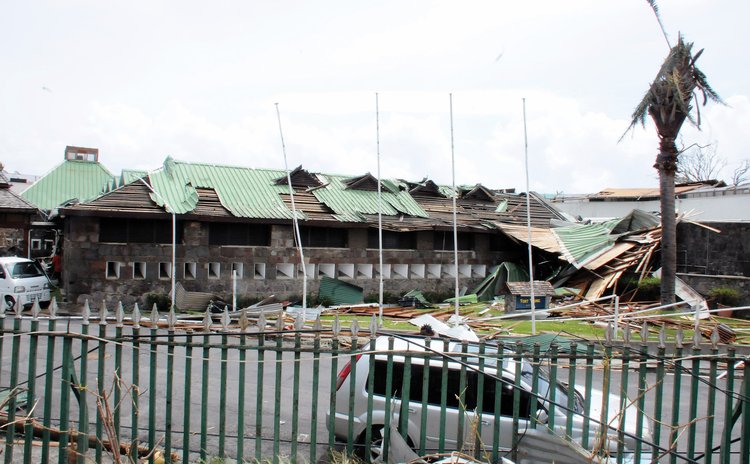 The enormity of the economic challenge the country faces after the unforgiving and unforgettable punishment inflicted by Hurricane Maria a little over two months ago can be found in a report of the findings of an assessment of the tourism industry conducted by the Discover Dominica Authority (DDA), the state agency charged with marketing the destination.

With the little there was of the productive sector pummelled into a crushing halt, the country is counting on tourism to jump start the economy; evidence of which can be found in the 'open for business' messages that the authorities are sending out in drips to the outside world.

However, there is a much grimmer reality facing tourism, as indicated in the report dated 16 October by Colin Piper, the director of tourism, a copy of which was obtained by The Sun.

It paints a rather depressing picture of the state of accommodation - some of which are unlikely to reopen – as well as sites and attractions, the very basic needs for tourism, although the situation with access is more encouraging, with LIAT, Seaborne and Air Sunshine having resumed limited services to Douglas Charles Airport and the ferry continuing to operate.

Of the 73 properties comprising 909 rooms listed as functional here before the curse of Maria struck, the DDA visited 64 and what it found was telling.

"The damage to the accommodation plant in Dominica is extensive and spans across the island with damage ranging from moderately affected to severely damaged [or] destroyed," Piper wrote in his report. Half of those were described as moderately damaged and could resume operation "now or in the near future with fix and repairs" but would require assistance with lights, water and amenities like laundry services for linens and towels.

Even more worrying are the 32 properties that were severely damaged or destroyed, "with serious to total destruction of structures including roofs, electrical and plumbing", some of which are likely gone for good.

"The outlook for these properties is longer term, say 12 to 24 months. However, some property owners have indicated they will be unable to rebuild," the director of tourism stated.

"The industry will need a lot of support and concessions in order to rebuild to previous state," he warned, his conclusion likely based on the uncertainties surrounding the future of the industry.

These uncertainties and concerns were made clear when the Dominica Hotel and Tourism Association (DHTA) presented its own preliminary assessment report, from which Piper quoted.

"The tourism private sector will need assurance that there will be a tourism industry for rebuilding," he quoted the DHTA as saying. "Unless this is assured owners will not want to continue these long term large scale investments. We need to understand where the government will be in meeting our needs."

It's a frightening prospect for an economy that needs every single penny in foreign exchange that tourism can earn.

The study found the state of tourism sites to be just as dire, with those attractions suffering extensive damage, and further hampered by limited access due to major landslides and debris.

The prognosis for the tourism services seemed better, although they were all impacted by the hurricane, some severely. "One of the operations office was totally destroyed; nonetheless several operations lost the bulk of their equipment which includes vessels, life jackets, tubes, vehicles and office furniture/fixtures," Piper said in his report.

However, the operators have said they will be ready to resume operations sometime between next month and January 2018, "specifically if they are able to replace the equipment which they have lost", and that they were willing to modify their tour packages to include locations which are ready and accessible.

This is likely to have a major impact on the cruise sector, which also suffered severe damage.

Two of the industry's largest revenue earners, carnival and the World Creole Music Festival, have been hit hard by Maria.

For the second time in three years the authorities have been forced to cancel the festival, having taken the not-so-popular decision to do so after the passage of Tropical Storm Erika in 2015.

This year, with accommodation severely depleted, the decision was taken early to cancel the event, while the Dominica Festivals Committee, which is responsible for both events, has decided to scale back next year's carnival.

"We suggest that carnival events are scaled back in size and scope in light of the circumstances and the two days of street jump up should be the highlight with the private sector taking the lead in a weeklong calendar of activities starting with the Lagoon Street Jam," Piper wrote, with a recommendation that the DFC facilitates a Diaspora t-shirt band on one of the two days.

Piper recommended that one or more cruise lines be asked to provide accommodation for Dominica during its 40th anniversary of independence and the 2018 staging of WCMF.

He also called for a short, medium and longer term strategy for the tourism industry, drawing from the experiences of destinations that have been through similar crises, with the focus on volunteer and Diaspora tourism and tourism for a cause in the next six to twelve months.