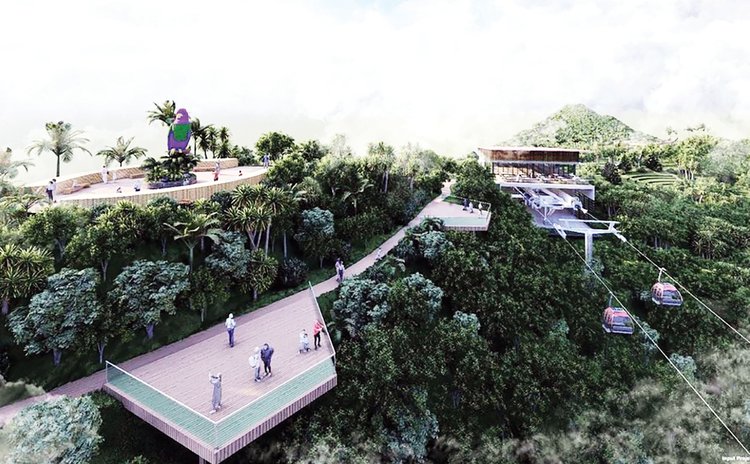 Residents of Laudat say they are concerned that their land is being taken away to build the "world longest" cable car to the Boiling Lake, a major attraction in the UNESCO World Heritage Site

Residents of SpringHill Estate, Laudat tells the Sun that earlier this year, they found out that their property may soon be taken from them when a foreigner came on their land uninvited and started conducting surveys.

Though they had heard rumours before, this was the first confirmation that they received that their land was going to be used for the 6.6 kilometres (4.1miles) long Detachable Monocable Cable Car project, which reports indicate is set to begin in November.

About seven residents of the area received their first official confirmation from the government of Dominica by way of a letter -which the Sun obtained a copy of- from the Lands and Surveys Division which stated that the government was interested in acquiring their land for the Cable Car project.

Since that time, the Sun has learned from sources that at least three meetings have been held with land owners who remain adamant that they're not willing to give up their land.

"If you have a private investor, the interest of the private investor is to get his money back, so that has nothing to do with public purpose. The public purpose would be stuff like the airport, schools, hospitals, maybe a cable car that could be used as a public transport, but not one that's used to destroy the country's national site and benefit private investors," the Sun was told

At present, the Laudat homeowner said that measurement of the road continues and based on unconfirmed reports the contractor is already on island.

The residents, who are all in contact with their attorneys, say that they are presently seeking advice on their way forward.

To date, they say that they have not had any meeting with their Parliamentary Representative or any other top government official, which they are requesting to voice some of their concerns.

"At this point, we would like to live our lives up there. This is our land, we are not interested in selling our land," the Sun was told.

According to information obtained online, upon completion, the project will be the longest of its kind, but it will also allow "safe and fast passage" in about 20 mins to Boiling Lake, a route that would otherwise take six hours by hiking.

The situation has also attracted the attention of Dominican conservationist and political activist, Artherton "Athie" Martin, as the lake which is located in Morne Trois Pitons National Park, is a UNESCO World Heritage Site.

He told the Sun that his environmental concerns about the world heritage site are driven as much by illegal considerations as well as the ecological.

According to Martin, based on international convection which Dominica is a signatory, it establishes that when an area of a country is declared a World Heritage Site, authority and management control over that site no longer resides exclusively with the country and is instead shared with the world heritage centre in Paris.

As such, he noted that any activity taking place in that area or around that area that is likely to affect the integrity of that area must first be discussed and received approval from UNESCO.

The Sun was unsuccessful in its attempts to speak with a representative at the international organisation to confirm whether such action had been taken.

If it wasn't, Martin said that this could have serious implications for Dominica as any incursion by the government without consulting UNESCO is in contravention of the world heritage site arrangement and could lead to a disciplinary response from the world heritage centre.

"If what we are seeing is a decision by the government to facilitate the incursion on the park, especially if in fact, the government has some interest in that corporate incursion then it is entirely illegal on the international law and is in contravention of the UNESCO Heritage Convention and places the island at risk of having the park downgraded and eventually could be delisted which could be a tragedy for Dominica," Martin said.

Earlier this year, Dominica's Tourism Minister Denise Charles dubbed the US$54 million project as critical, noting that it will feature Dominica as a "major tourist destination as many people will be excited to come and visit the second-largest boiling lake in the world."

She said the project is being undertaken by ABL Holdings- whose website state is among the world's most successful companies in terms of residence and citizenship by investment- with the government having a 15 per cent stake.

Back in May, Charles also announced that the government was currently in the first phase and had done consultations with the people of the Roseau Valley.

"We are finalising negotiations with land owners," she said, which based on the letter sent, during that month expressing interest portrays a different picture.

The Associate Times reported that Outdoor Engineers – (a European company based in Switzerland) conducted a feasibility survey in Dominica, which revealed that the completion of the cable car project would boost tourism in Dominica three-fold.

Further attempts were made by The Sun to obtain a copy of such a study but proved unsuccessful.

Though the government has not said anything publicly another international site 'Zenger' reported on August 29 that Austrian ropeways and cable cars manufacturer Doppelmayr Group have been contracted to build the 6.6-kilometre-long (4.1-mile) gondola by 2024.

Doppelmayr Group told Zenger News that the 10-passenger detachable gondola will give visitors a "fast, reliable and comfortable means of accessing the national park in less than 20 minutes."

Hospitality and shopping facilities focusing on the Caribbean island's distinctive local features will be incorporated at the bottom station, according to Doppelmayr. In addition, the area surrounding the top station will consist of a restaurant with a panoramic terrace, a viewing platform, and a six-metre (19-foot) statue of Dominica's national symbol–the Sisserou parrot will be placed at the highest point, the site reports.