Treneese Hamilton: "Just do what you love" 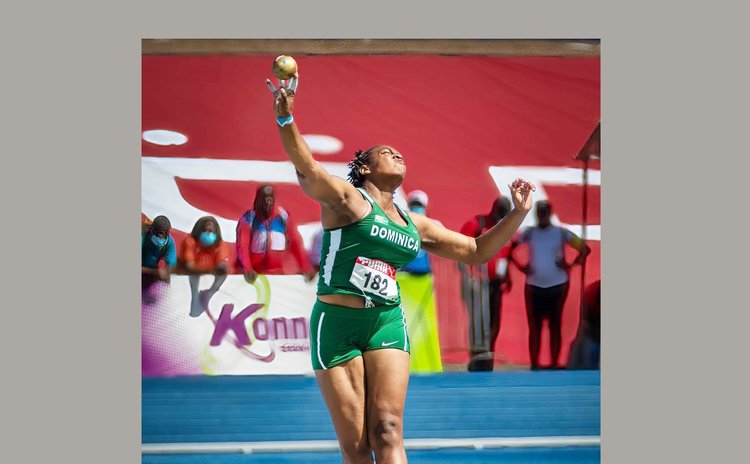 A few minutes into Trenesse Hamilton's interview with the Sun, it was evident that the 18-year-old eats, sleeps and breathes sports.

Coming from parents, Derrickson and Jasmine Hamilton, a former basketball and netball players respectively, as well as having a cousin -now coach - Joel Hamilton, who's well known for his involvement in sports, it's not hard to tell where the 2nd year biology major at the Dominica State College (DSC) developed her love for the court and track and field.

As she's been told on numerous occasions, "sports run through the Hamilton bloodline," and Trenesse would discover that herself at an early age while attending her alma mater the Massacre Canefield Primary school.

When asked about some of her favourite activities, the Canefield resident chucked, and responded: "I love going to the river, but other than that my main focus revolves around sports, whether it be track and field, netball, volleyball, basketball- although I don't really like it because of the running- I just love sports."

Gold at the CARIFTA Games

Though many would think that Treneese who bagged gold for her stellar performance in shotput at the CARIFTA Games last month would favour this sport the most since she's so good at it, such isn't the case, and she actually revealed that her first love lies in netball.

"From the very first time I shot a ball into the basket in grade 4, I fell in love with the sport," she said buoyantly to The Sun.

As for shotput, which she labelled as her second favourite, on Sunday, April 17, 2022, Treneese made history at the CARIFTA games for Dominica when she defeated Britannia Johnson of Jamaica after throwing the shotput, her best throw of 14.19 m.

According to the athlete, with this being her final year in the competition, as next year she'll no longer be able to compete in the U-20, she wanted to end with a bang, and that she did!

In 2018 she secured two bronze, one in shotput and one in discus in the U17 competition. The following year, she went up a notch and got a silver in shot put and a bronze in the discus at the competition.

"Therefore, I went into the CARIFTA Games with the mindset that I am going to finish my series by getting gold so I could proudly say I got bronze, silver and gold in my CARIFTA journey. I did my part and left it all into God's hands, and he came through," the sports star declared.

The loneliness of individual sports

According to Treneese, the journey to achieving the success that she has attained thus far has not always been easy, and on many occasions, the thought crossed her mind of giving up on sports. However, she added that she would always receive the support and encouragement needed from her parents, younger sister, and other family members which kept her going.

"An individual sport is never easy because you don't have the support of team members, such as netball. If you're feeling down your whole team will be around giving you the motivation but individual sport it's just you and sometimes it can be really tough," she stated.

To the younger athlete or her peers who aspire to follow in her footsteps, Treneese urged them to place God first, and secondly to never doubt their abilities despite their circumstances or the discouragement from others.

The 18-year-old sports enthusiast opined that once one possesses the passion and has the required drive for a particular sport, they should keep improving on their skills.

"Just do what you love. Remember why you started it in the first place. There may be times when you may decide that you are not doing enough -and sometimes that may be true, but at the same time you have to look back and say to yourself, look at all what I have accomplished, it would be a waste to stop now" she encouraged.

At the time of the interview she had just finished representing Dominica the day before - May 14- at the 8ème Meeting International du Lorrain in Martinique where she placed second in the shot put competition.

What the future holds

Commenting on her recent performance, she stated, "there are bad days in the office and always room for improvement. But considering the fact that Dominica is a small country, I will accept any acknowledgement from the podium so that everyone can know that we were represented and they can look forward to seeing Dominica do better in future events."

As to where she goes from here, Treneese hopes in the near future to compete and once again break the U-20 national record given that it is her last year. She also intends on setting a new record to challenge other shot putters in Dominica to meet or surpass.

The young adult also hopes that future record-breaking international competitions will set a foundation which will allow her the opportunity to further her studies in sports and develop her athletic abilities. But while she dreams of making a name for not only herself, but Dominica, this sports rising star says she leaves all of her plans in God's hand.

"He's the one who directs my steps," she said.